First of all thank you all for still commenting and reading along as much as you do even though I’m not blog visiting and reading right now during our trip. I soooo appreciate it!

The castle I’m showing you today has been a favorite of mine since my early childhood. It is pretty close to my hometown and I have gone there on many family and school trips growing up.
Now it has become one of my children’s favorite as well and in the following photos you will be able to see why it’s charm has captured our hearts.

The castle I’m talking about is “Schloss (Castle) Mespelbrunn” which is one of the few castles in Germany that has retained its original form throughout all the wars, even both world wars. The reason for this is because it is located very remotely within the “Spessart” forrest.

The oldest part of the castle is the mighty tower which you can see below. It’s origin goes back to the thirteenth century. In that time it had to protect the road running through the valley which was one of the most important roads running through the Spessart. The chief part of the tower was built by a knight Hamann Echter in the early fifteenth century (1419-1432).
My kids go crazy for buildings that are this old. 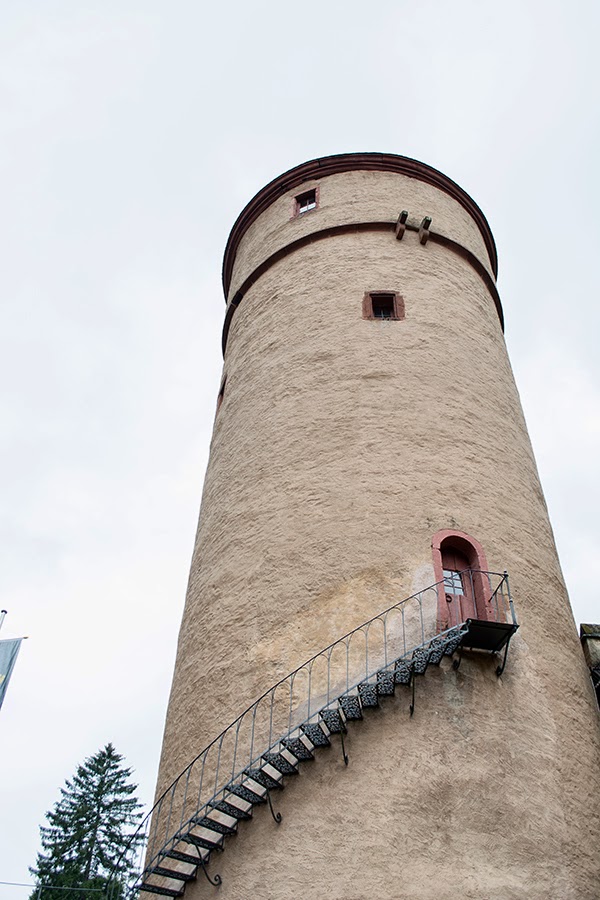 But my daughter pictures Rapunzel sitting in this tower not some knight 😉 and when you see the next photo then you know how people could come up with such great fairytales.
The below photo is what you see when you walk up to the castle from the parking lot.  It makes me think of gnomes, fairies, animals and princesses and that is exactly what my daughter thought too.
It is a peaceful and magical place with clean air and water trickling in the background. 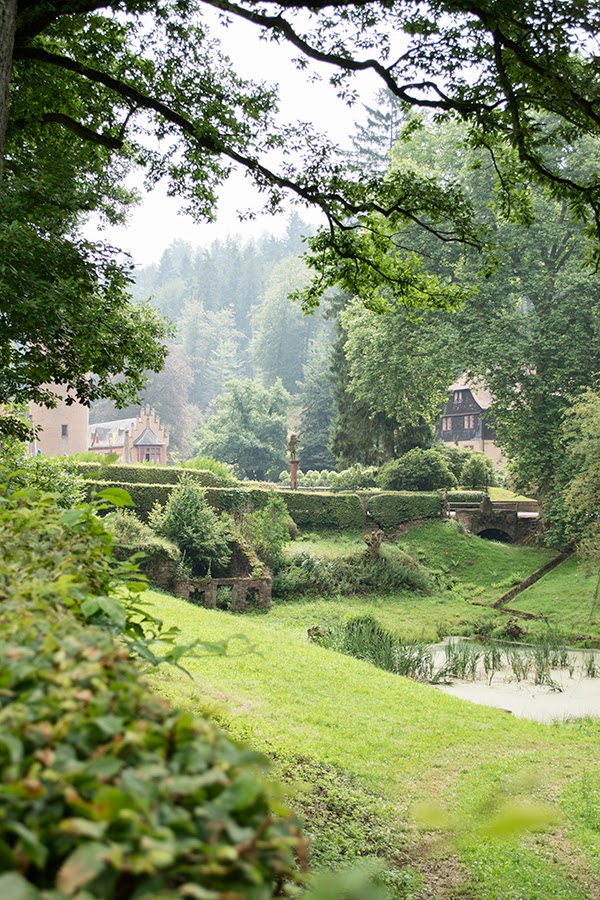 And yes, people are still fortunate enough to live here.
There are several buildings where farmers and castle employees used to live: 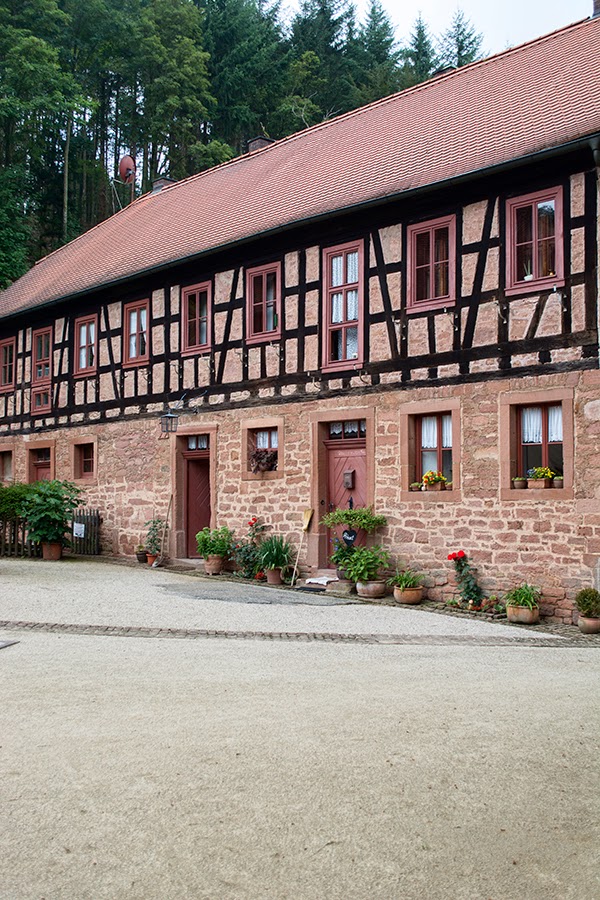 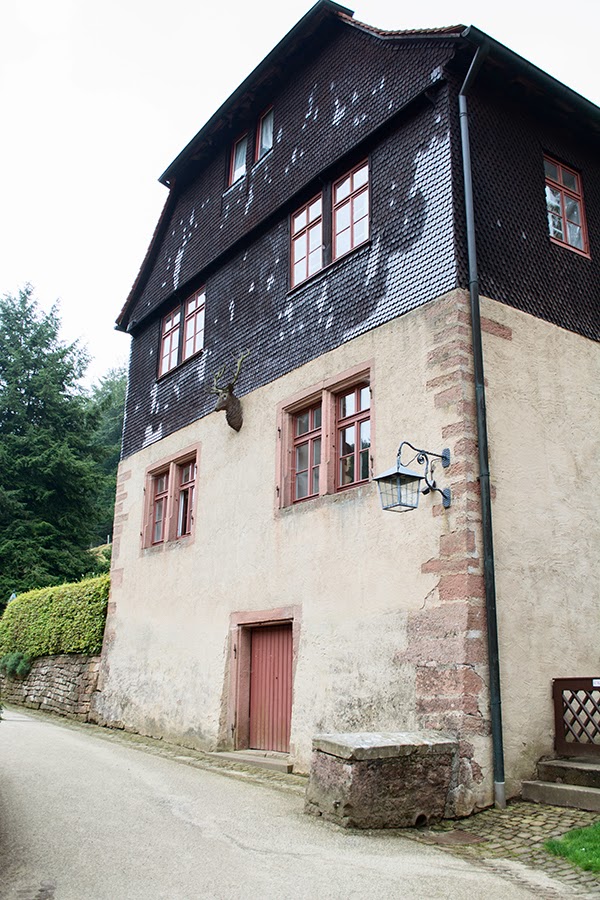 The former horse stables which is now a little place where you can grab a snack to eat: 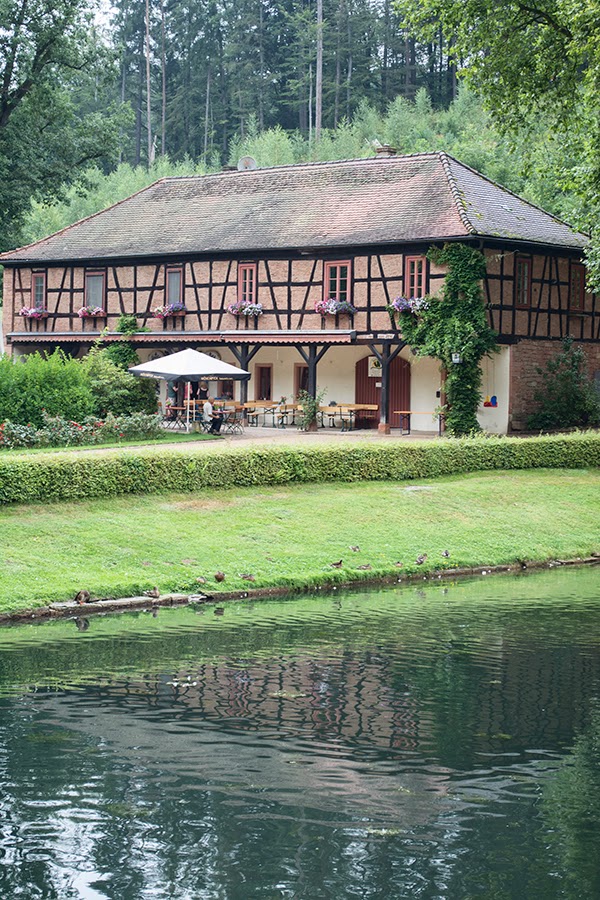 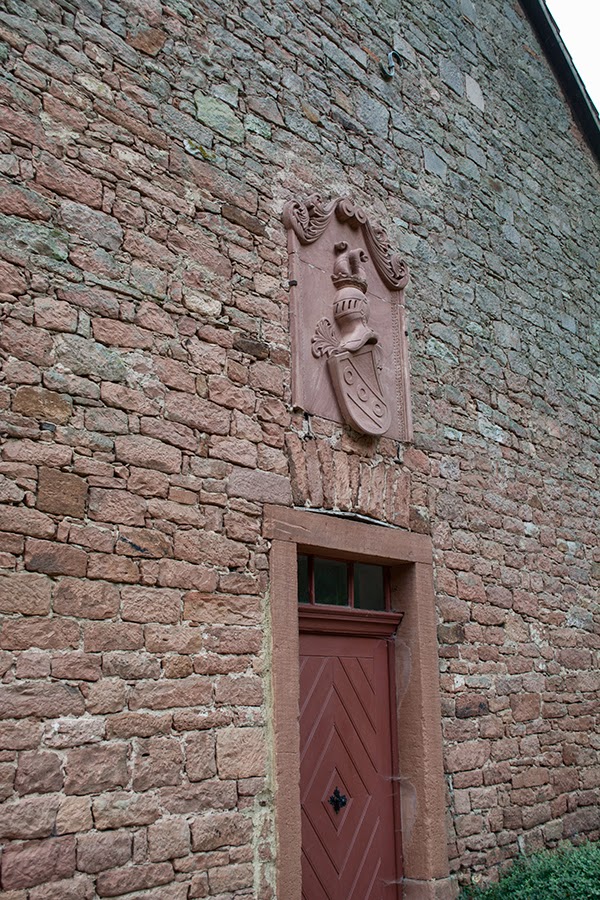 In front of the castle gates: 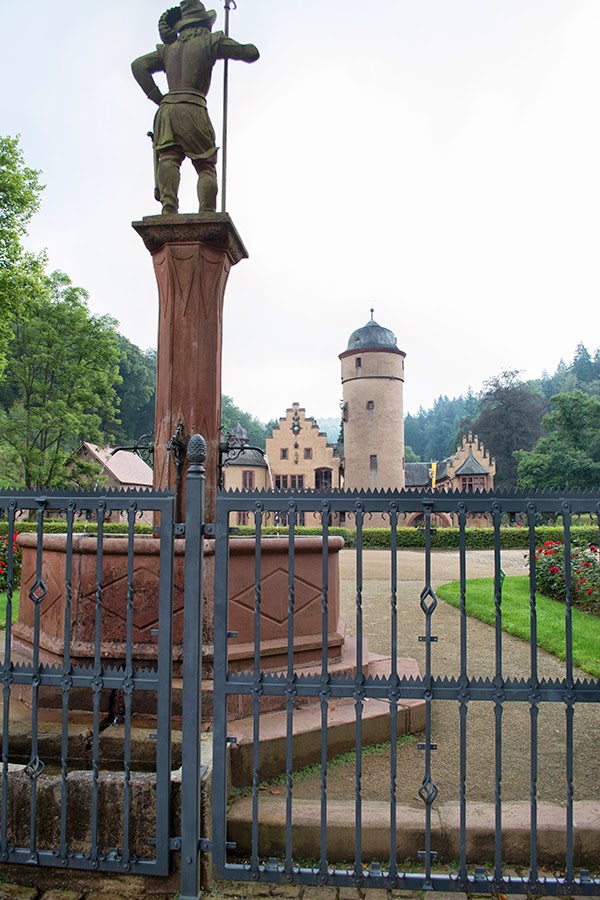 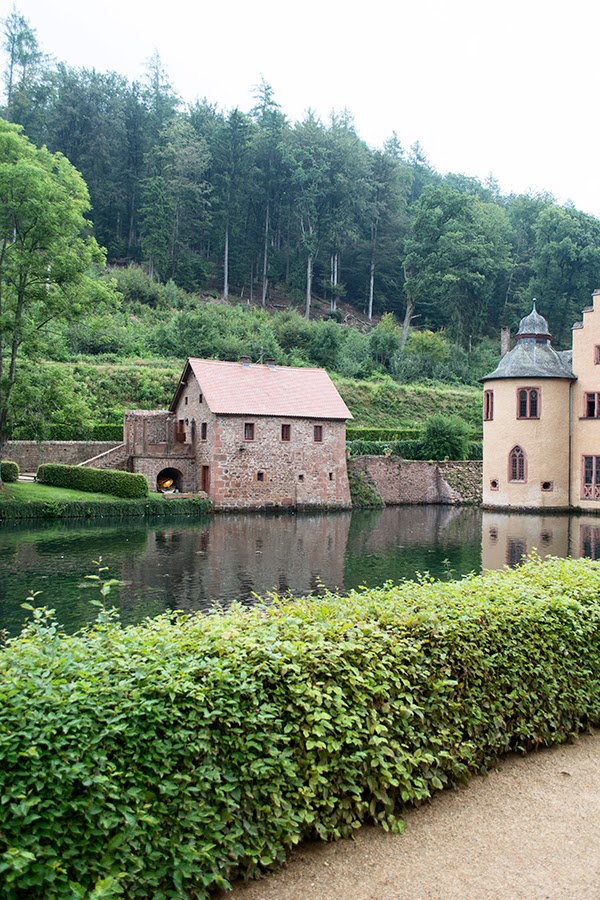 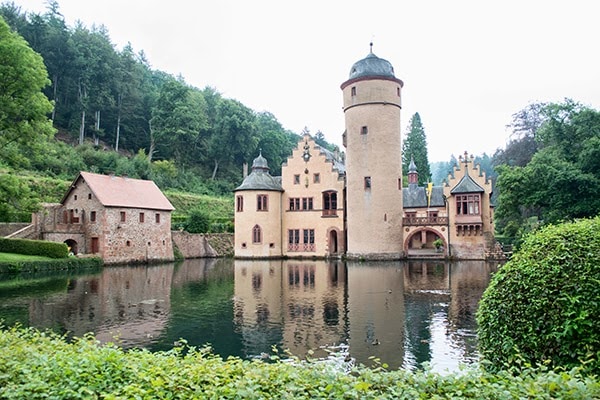 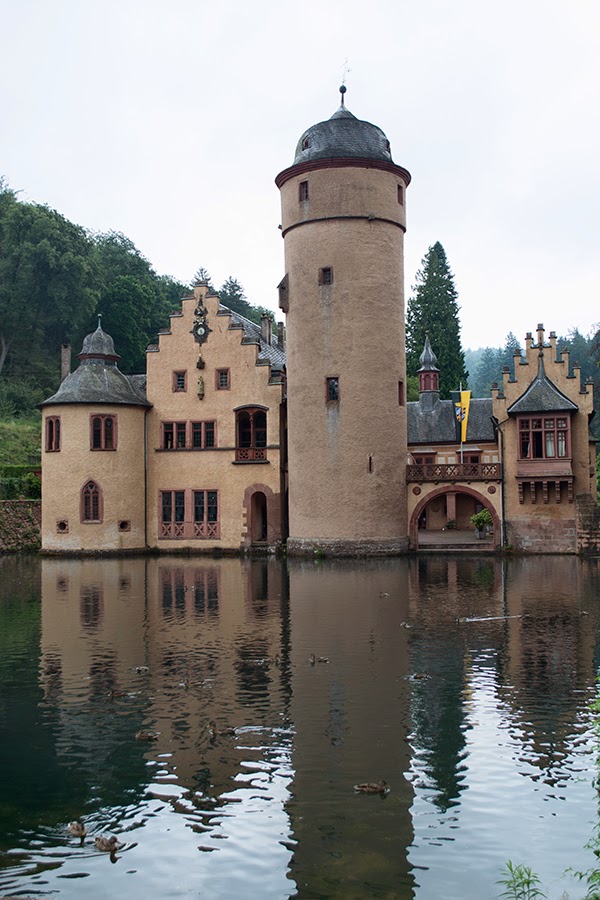 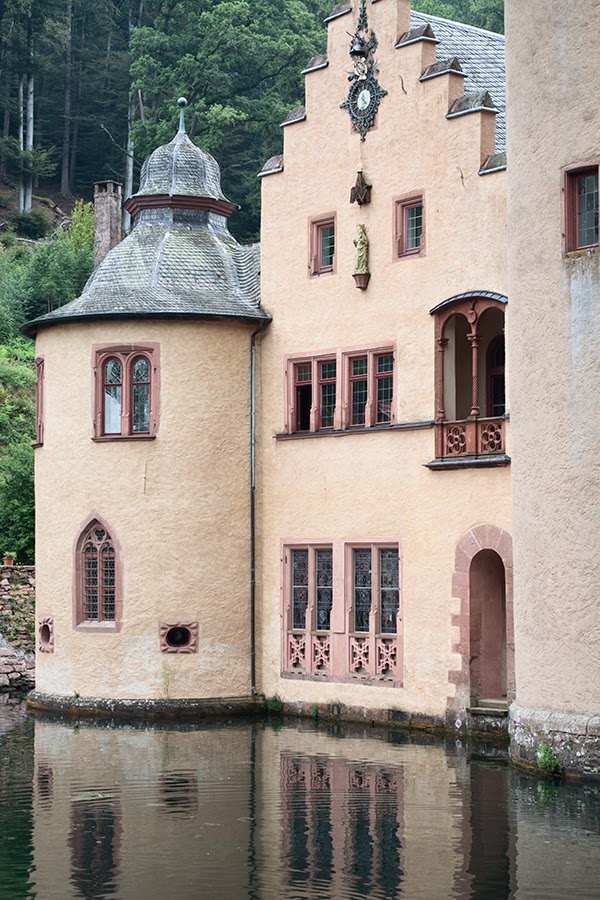 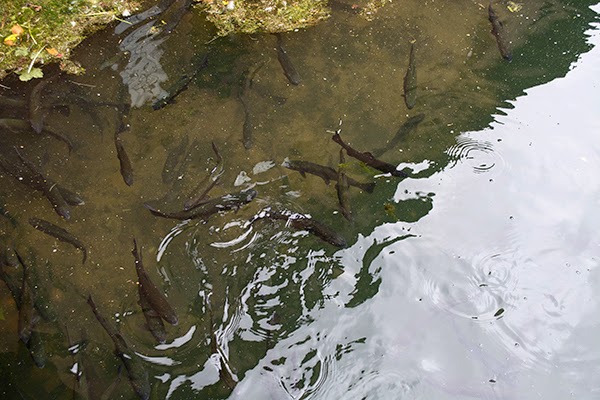 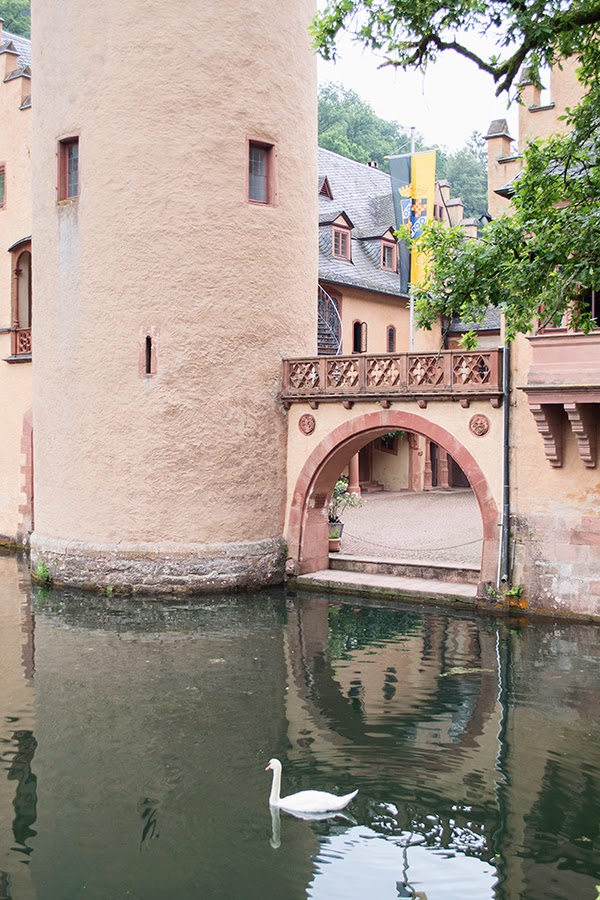 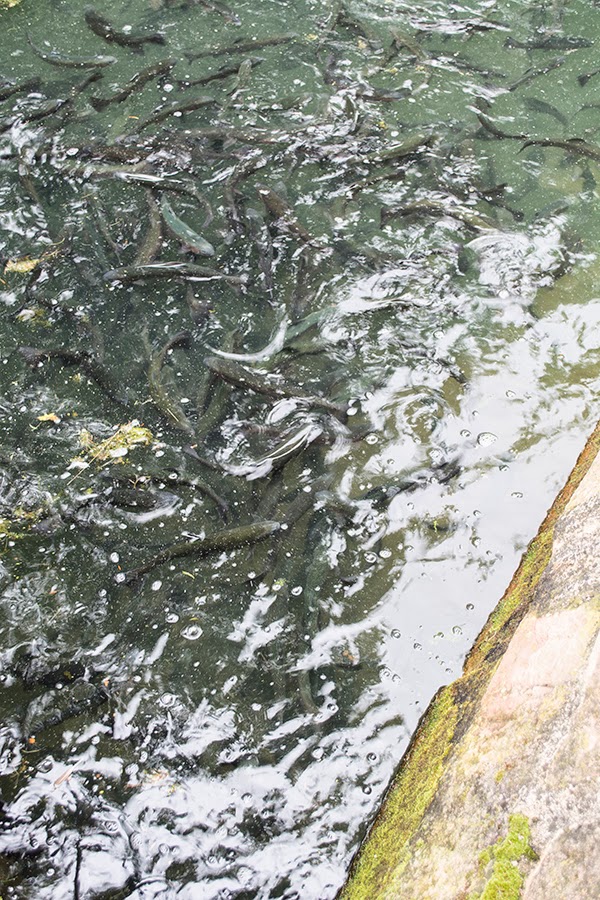 Feeding the crazy fish in the castle’s moat: 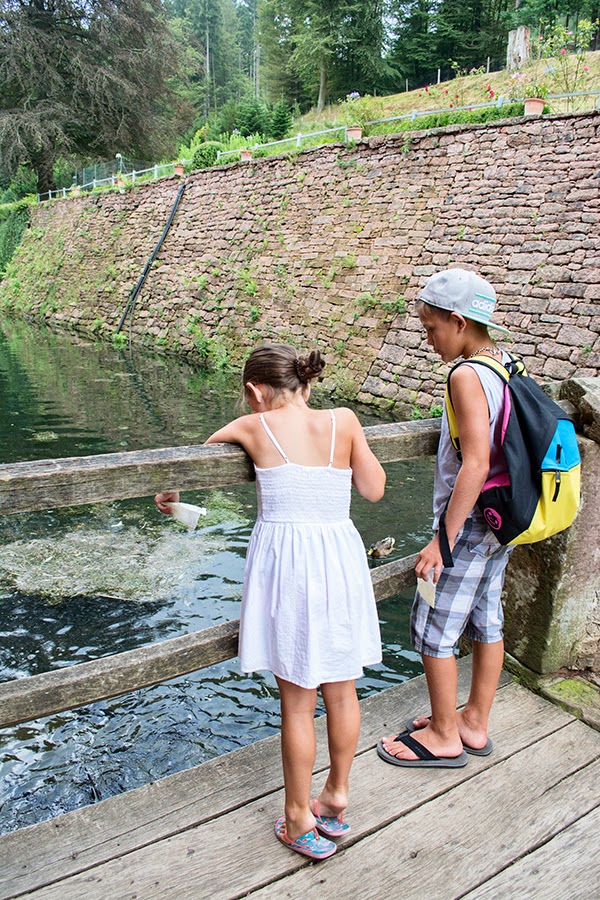 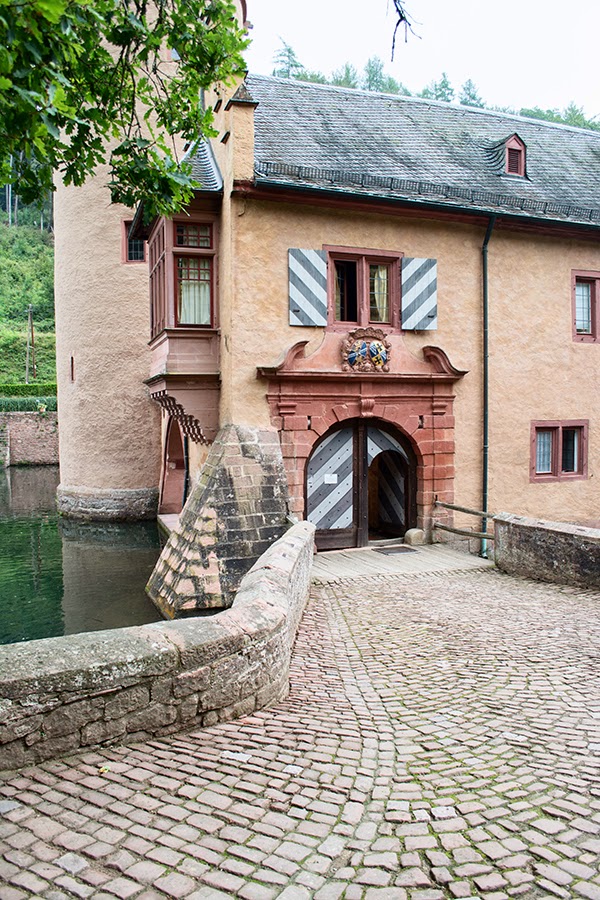 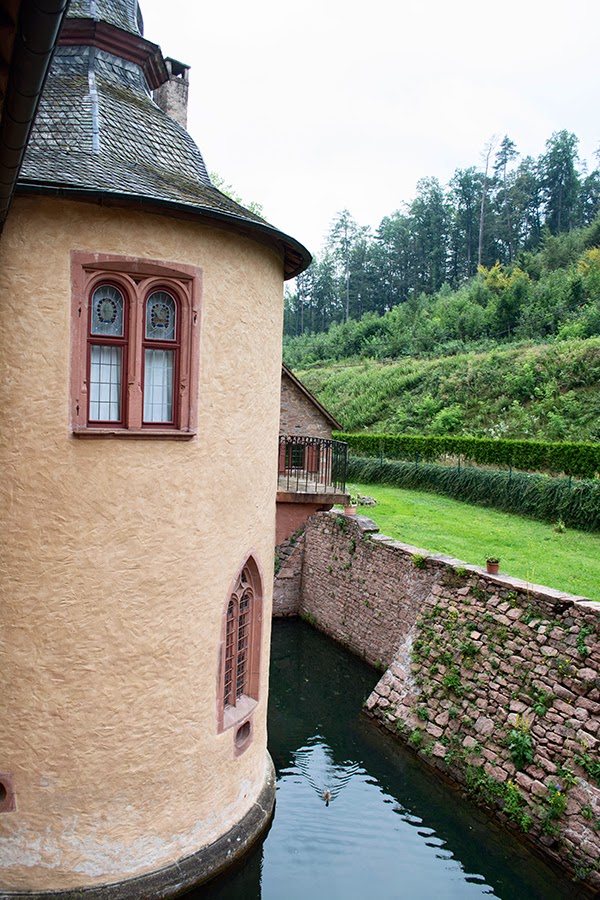 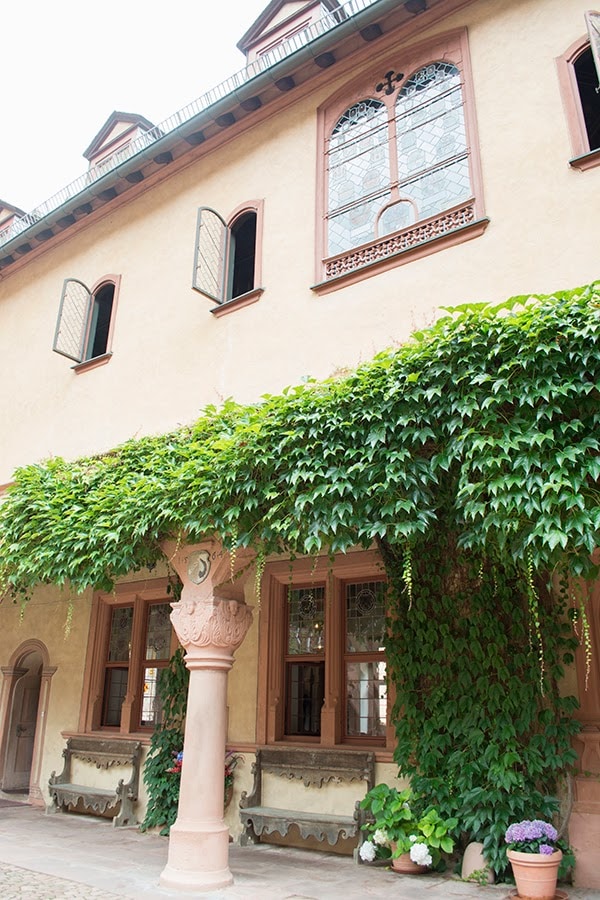 The below photo of the entrance leads to some of the upper rooms where you aren’t allowed to take any photos. I would have loved to though. Above the door are stones carved of Peter Echter and his wife Lady Adelsheim with the date 1564.
Half of the castle’s rooms are living quarters to the current countess. Her eldest daughter Marie-Antoinette Countess von Ingelheim is the current heiress to castle Mespelbrunn.
The rooms that you are able to see are still being used for special occasions like family weddings and birthdays. My kids think it’s so cool to be raised in a place like this.
Yup I’m still obsessed with doors as you can see in all of the below photos: 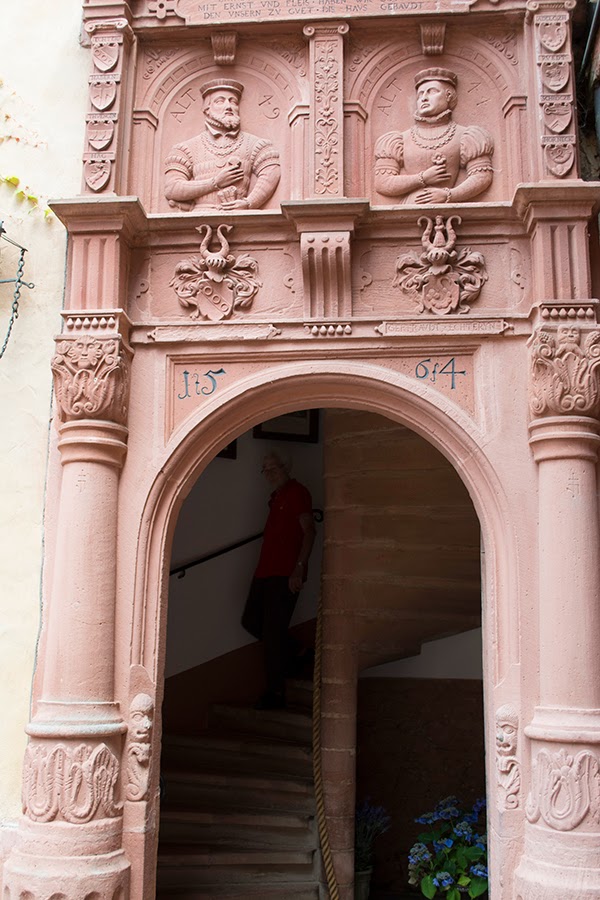 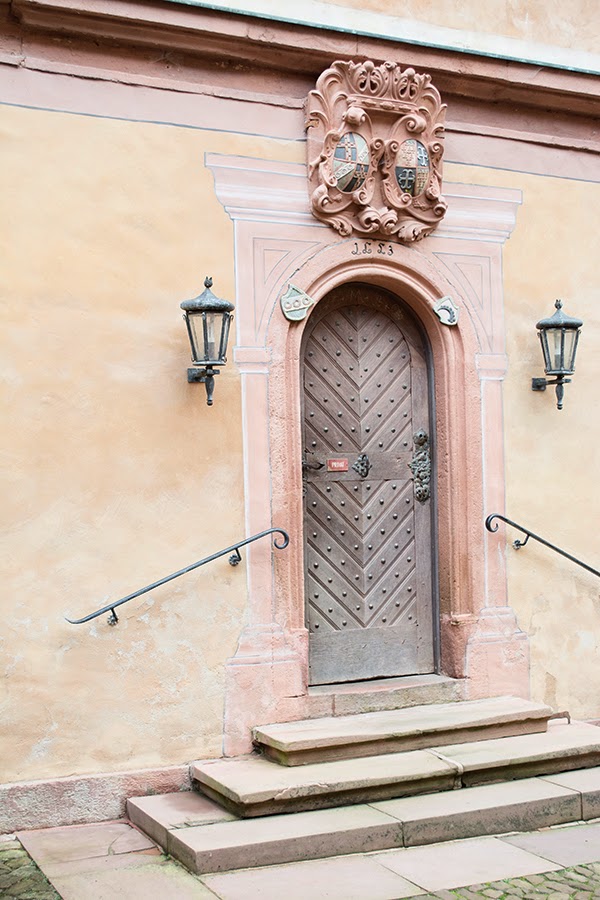 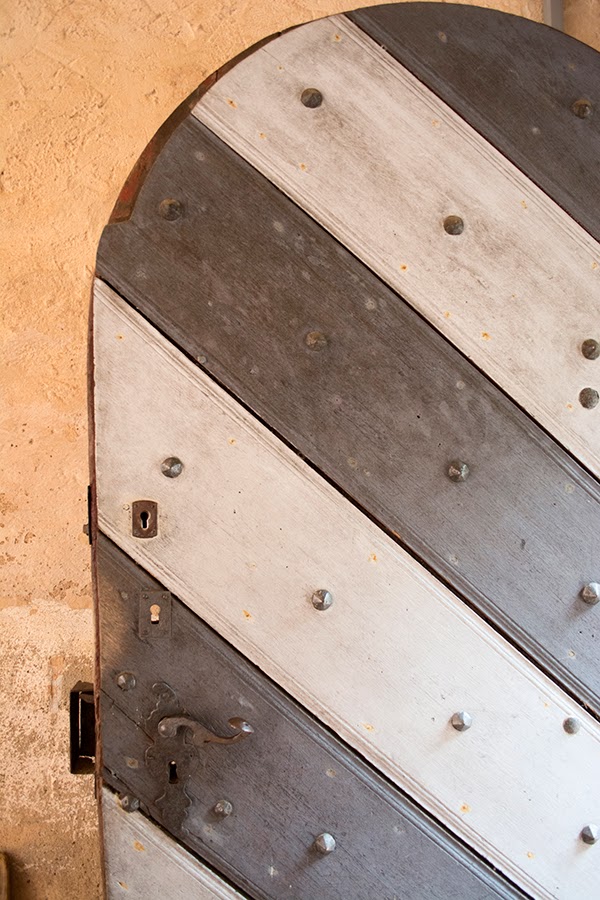 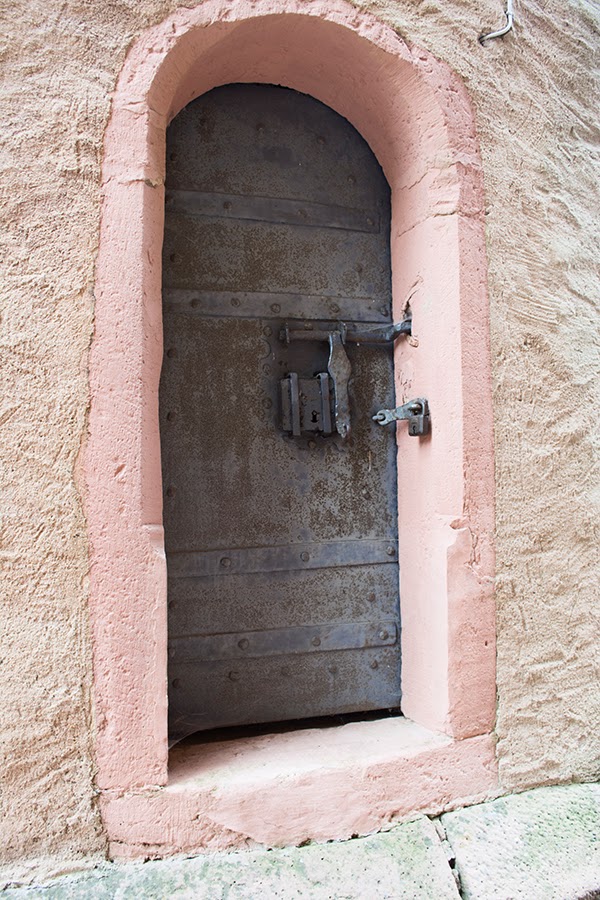 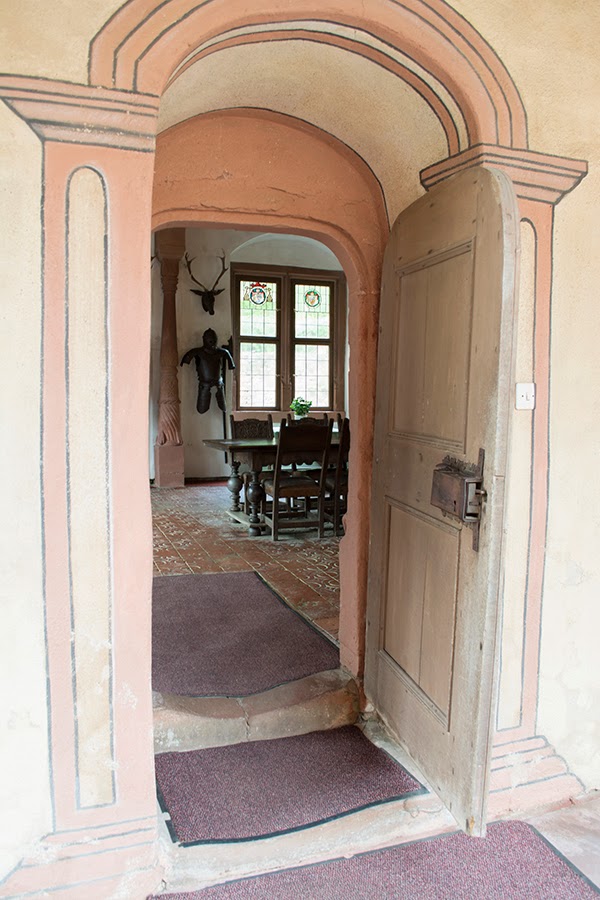 I was able to take some photos of the main floor: 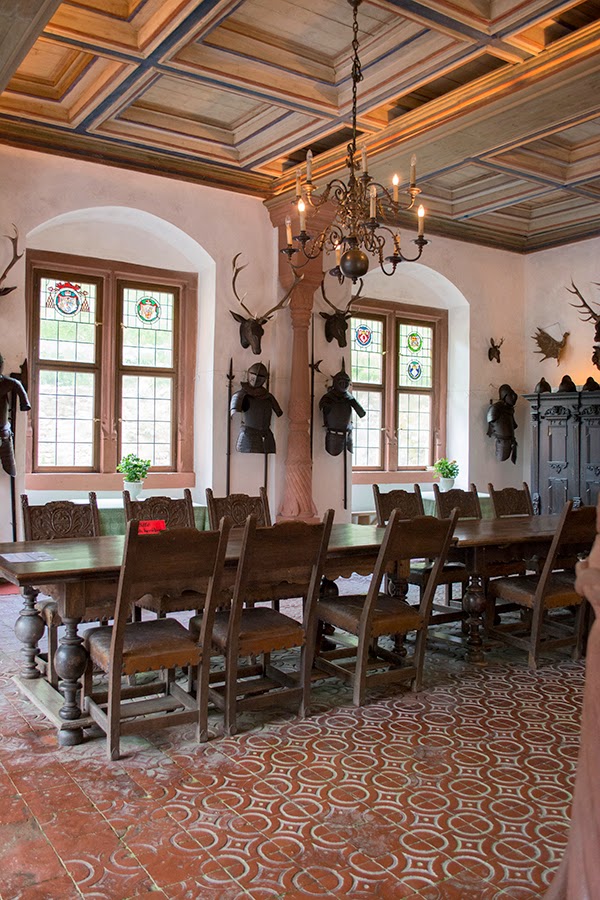 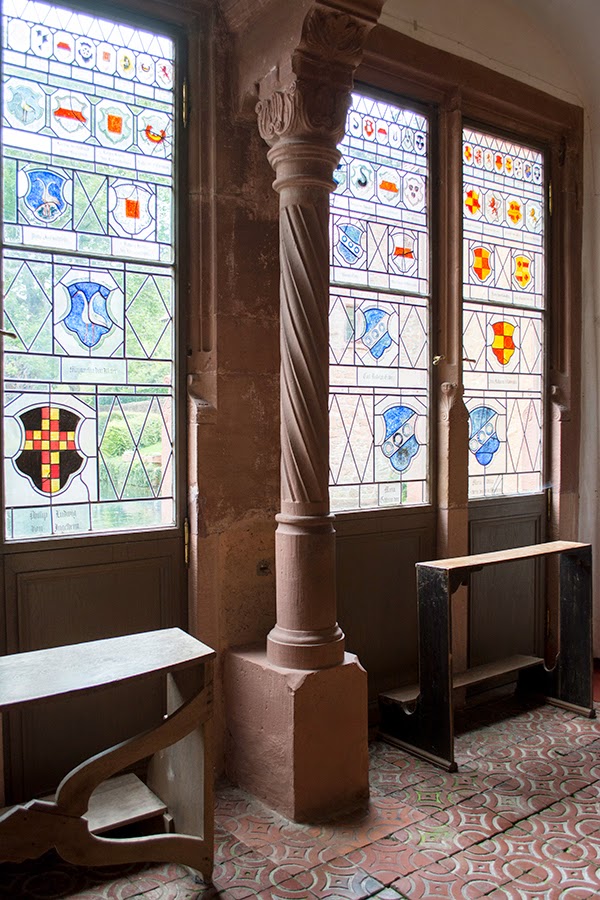 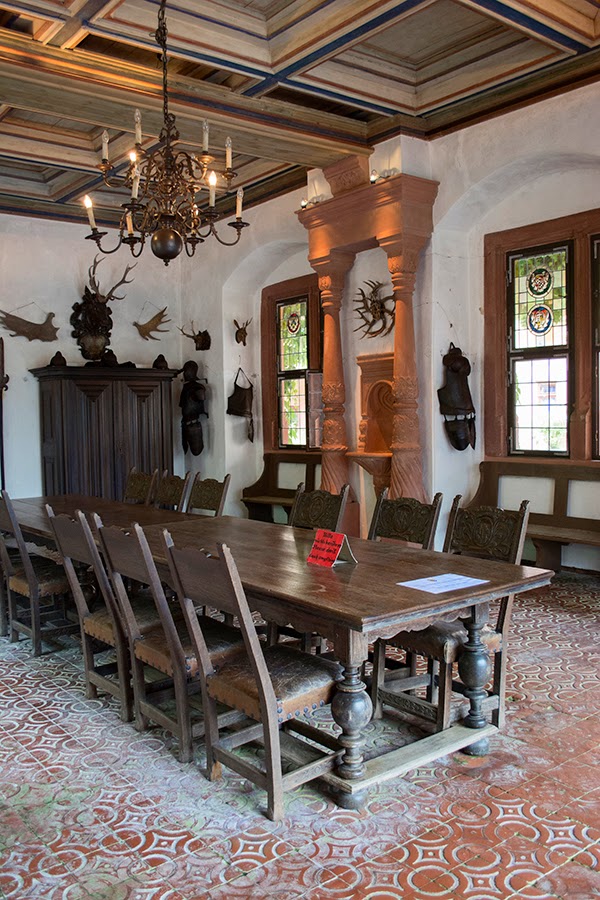 This place has completely enchanted my kids and I’m sure it won’t be the last time we visit.
One of the things that I remember the most as a chid and it really impressed my kiddos too is the authentic South American shrunken head that is for display in one of the cases. Creepy always wins children over, doesn’t it?
A German movie that was filmed there in 1958 made this castle famous as well. “Das Wirtshaus im Spessart” and I loved watching it many many times as a child.
I hope you enjoyed this little castle post.
More Germany posts:
2013
Windows to my past
Our Church Anniversary
Vintage Bjørn Wiinblad
Loving the local watchtower
Crashing my parents house
Where does the real Snow White come from?
Visit to Aschaffenburg
Chiemsee visit
Königssee visit
Sad History lesson
Visit to Praha written by my son
2012 posts:
Cuckoo 4 Würzburg!
Random photos from our trip
my brother’s old place part 1 and part 2

Germany posts:
2014
Baden Baden and Heidelberg
Visit to Bratislava and Mödling written by my son
Visit to Wien written by my son
My love for Würzburg
Crashing My Brother and Sister-in-Law’s New House
2013 posts:
Windows to my past
Our Church Anniversary
Vintage Bjørn Wiinblad
Loving the local watchtower
Crashing my parents house
Where does the real Snow White come from?
Visit to Aschaffenburg
Chiemsee visit
Königssee visit
Sad History lesson
Visit to Praha written by my son
2012 posts:
Cuckoo 4 Würzburg!
Random photos from our trip
my brother’s old place part 1 and part 2