My son has the second post to his trip yet for you guys. And if this isn’t your type of thing then pretty please hang in there for when I get back to more DIY and interior blogging at the end of the month.  Don’t leave me yet, I promise I’ll be back to my old self soon. Here he goes.

I’m back with another post! It’s the follow up/second post of my Hamburg trip (click HERE if you missed it). This year on our second day in Hamburg my dad and I decided to take a day trip to Schwerin and  Lübeck.  They are two towns all about 45 minutes away from Hamburg and each other.

The castle in Schwerin is considered the Neuschwanstein of the north. The castle was very beautiful and historical. The first records of a castle at this location date from AD 973. There was a fort of the Polabian Slav tribe of the Obotrites on an island in the large Lake of Schwerin. 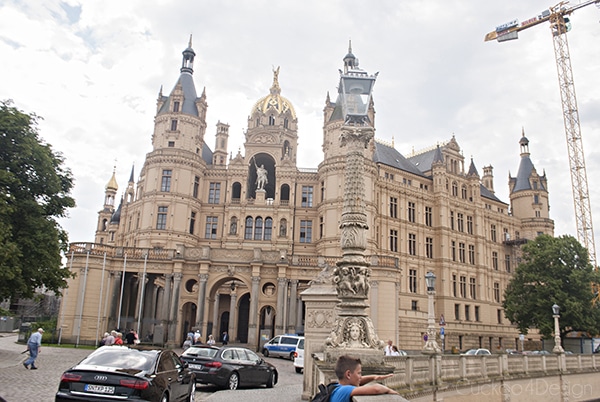 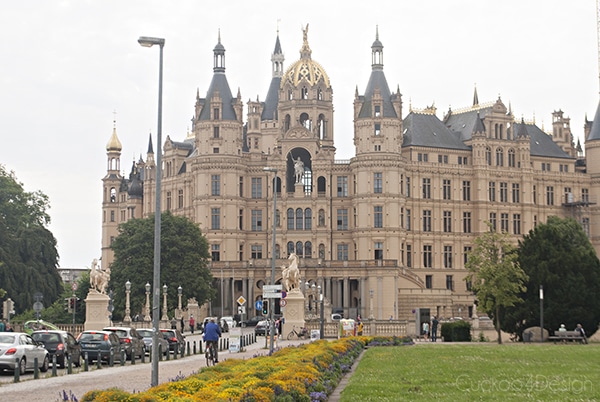 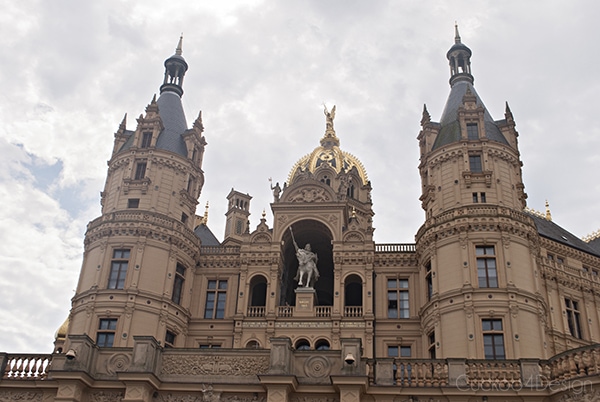 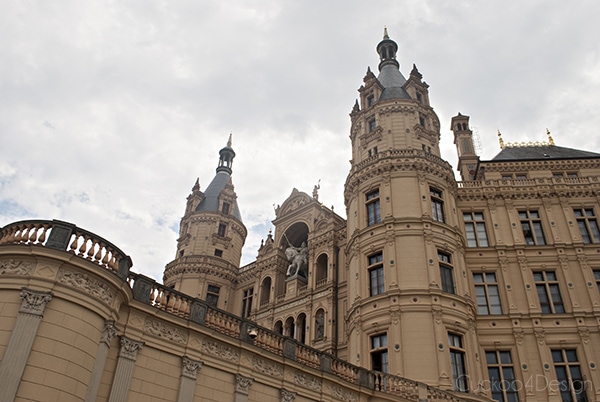 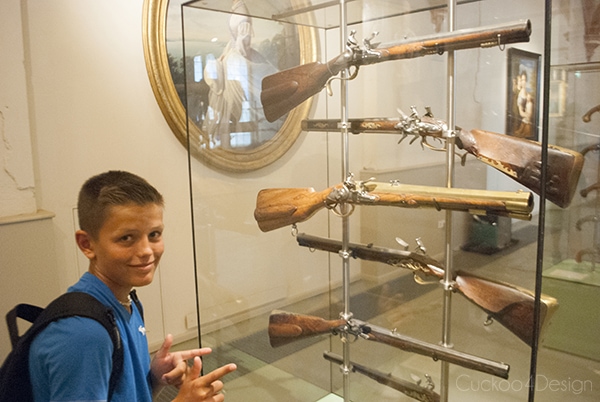 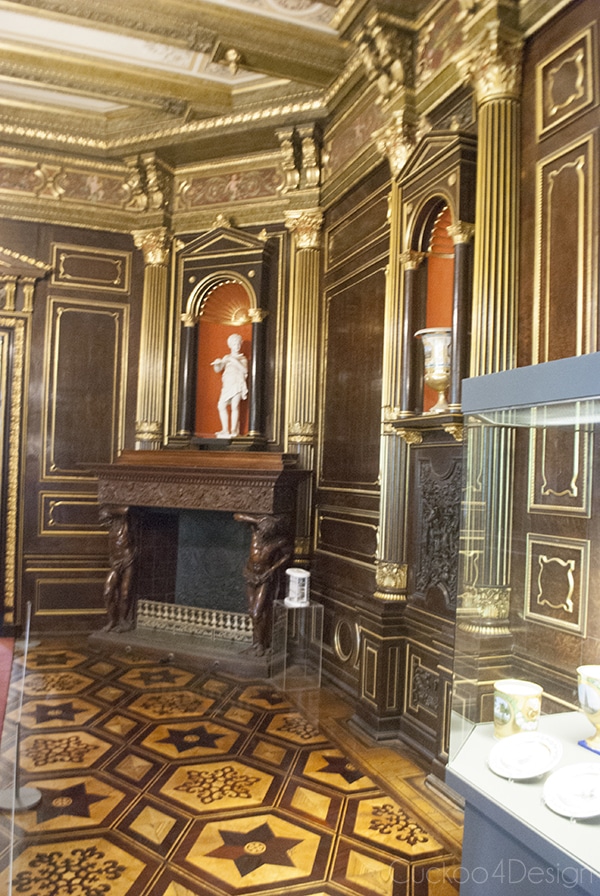 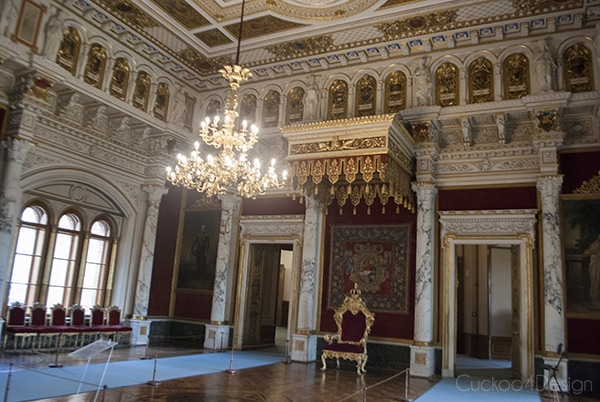 This was the throne room, definitely the most impressive room in the castle. 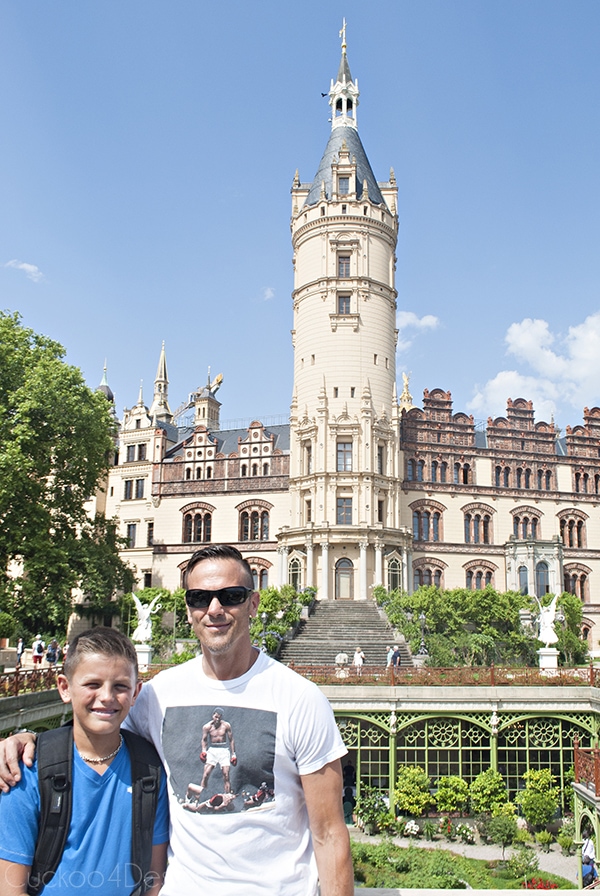 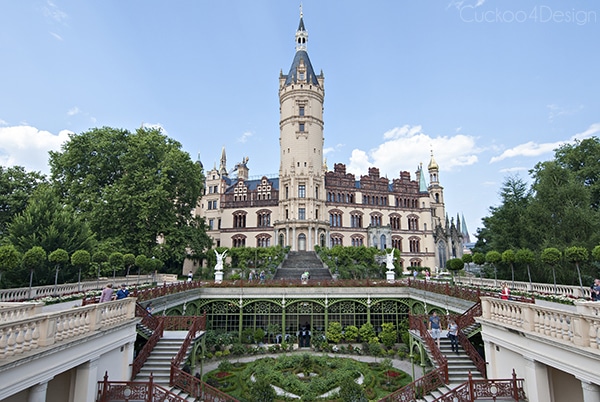 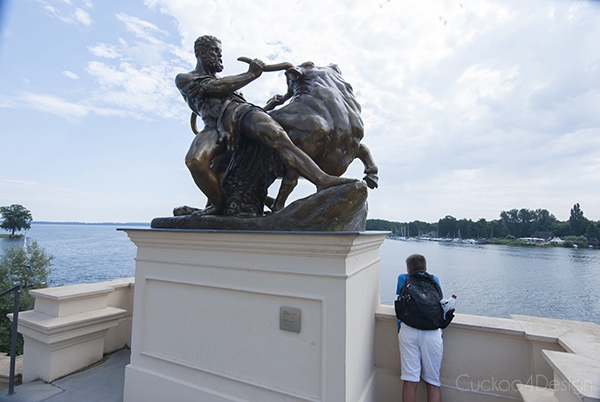 The Hercules statue in front of the castle 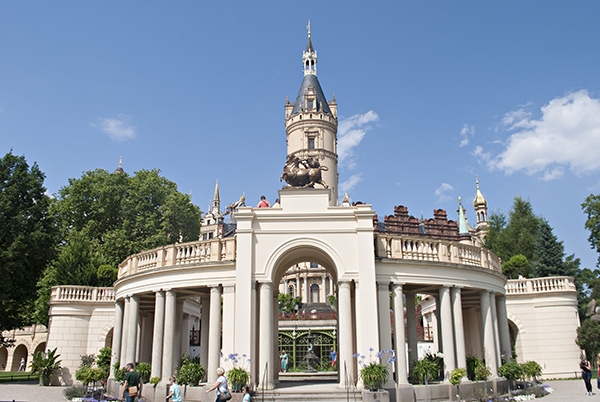 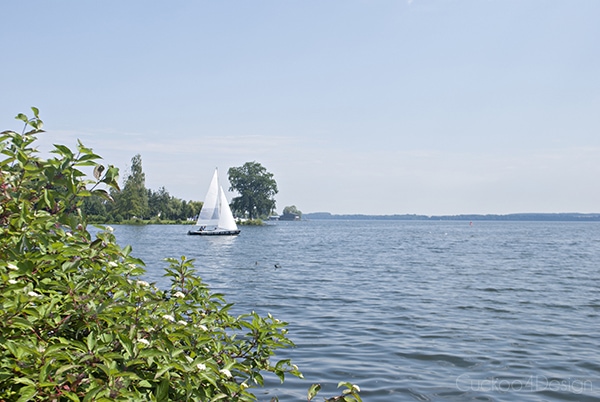 This lake reminds me of where we go on vacation in Virginia at Smith Mountain Lake. 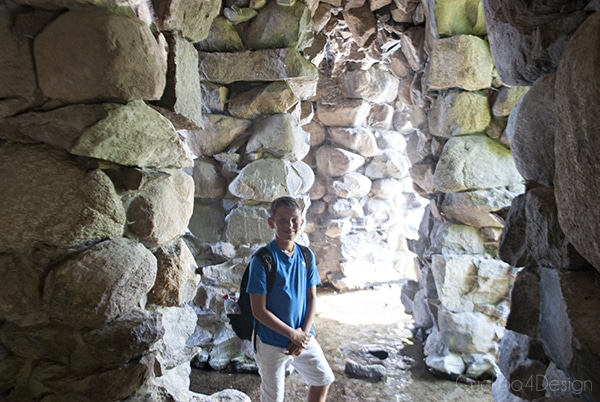 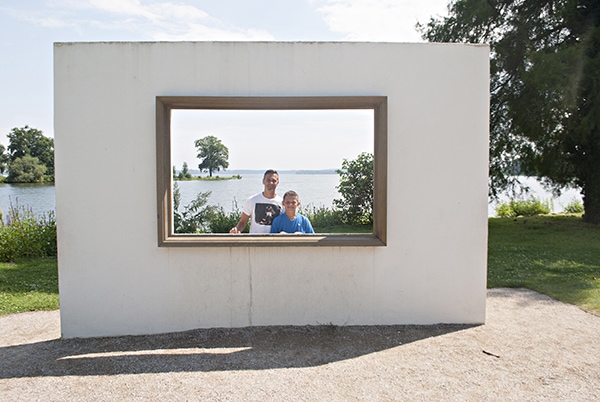 My dad and I stopped at a cafe in Schwerin to grab something to eat for lunch. I had Käse Spätzle casserole with meat in it. My dad had baked camembert with toast, Johannisbeer jelly, cream and of course a cold beer. We found a cozy spot by the town hall with a fabulous view of the Schwerin Cathedral whose foundation stone was laid in 1172. 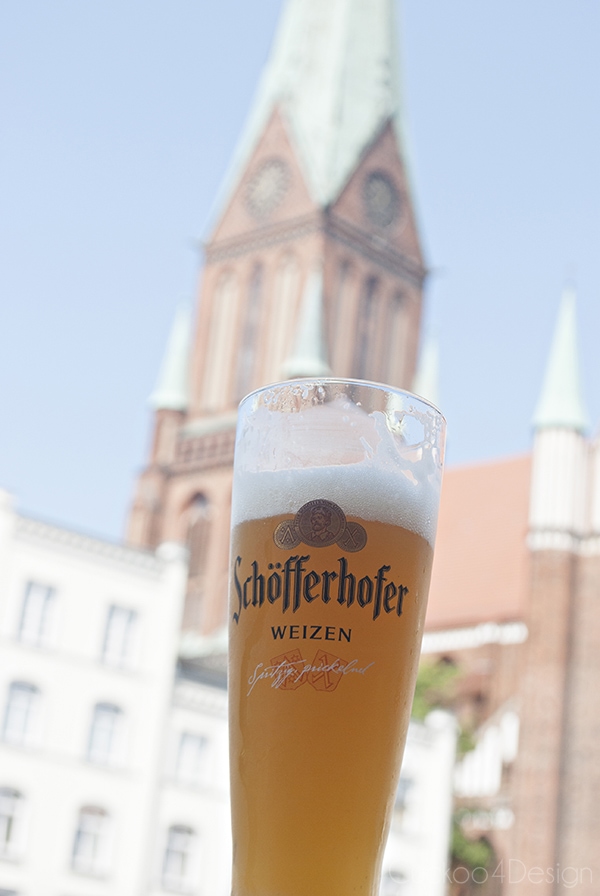 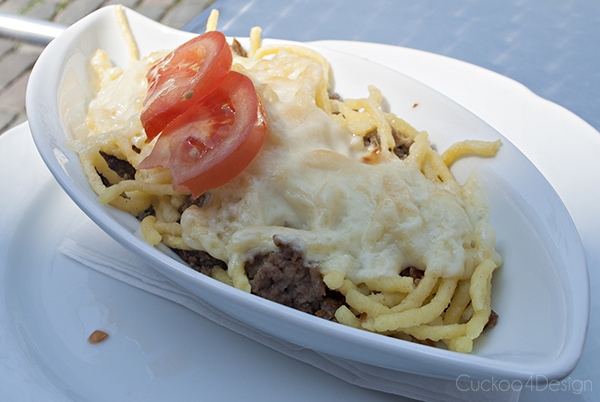 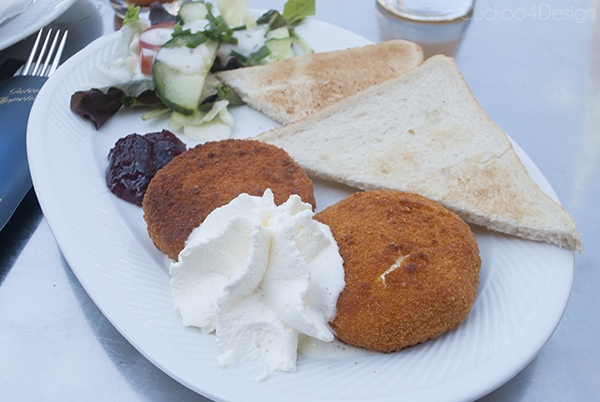 Lübeck was honestly a pain in the you know what, not the city but just getting there. My dad and I were heading there from Schwerin and the ticket counter didn’t tell us we had a connecting stop. So we had to get off the train in a town called Blankenberg. Blankenberg didn’t even have a building for their train station! So the next train was one to Lübeck and it was estimated to take 1 hour and 15 minutes. So we went to Lübeck and we only stayed for about half an hour because the next train to Hamburg was coming in 45 minutes. That all means we didn’t spend our time very well. 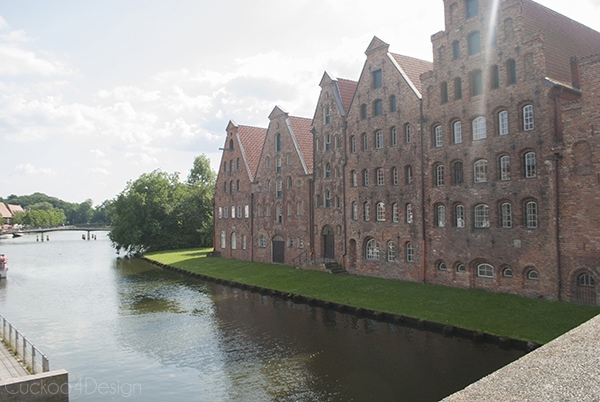 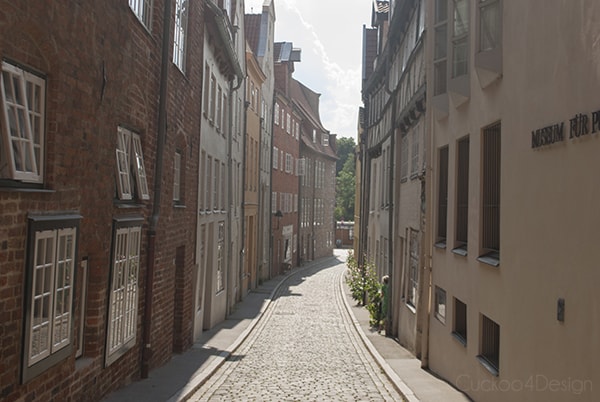 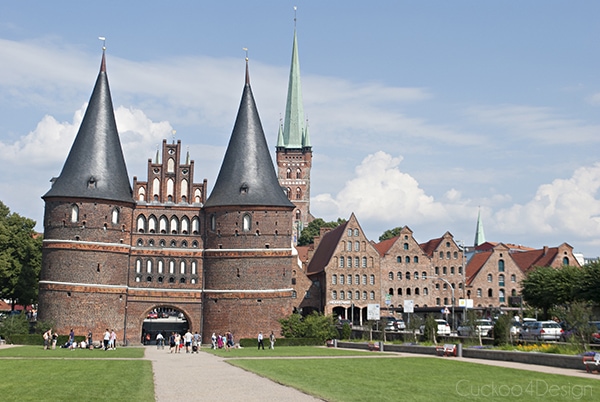 For me the “Holstentor” was definitely the sight to see in Lübeck.

The Holsten Gate (“Holstein Tor”, later “Holstentor”) is a city gate marking off the western boundary of the old center of the Hanseatic city of Lübeck. Both of these historic landmarks are Unesco World Heritage Sites. A World Heritage Site is a place (such as a building, city, complex, desert, forest, island, lake, monument, or mountain) that is listed by the United Nations Educational, Scientific and Cultural Organization (UNESCO) as being of special cultural or physical significance. And I got to also revisit Bamberg this summer again which is also part of the UNESCO work heritage list. My mom will write about that another day though. I think two posts are enough for me this year. It’s too much like having school work and I’m not ready for that yet, forgive me 🙂 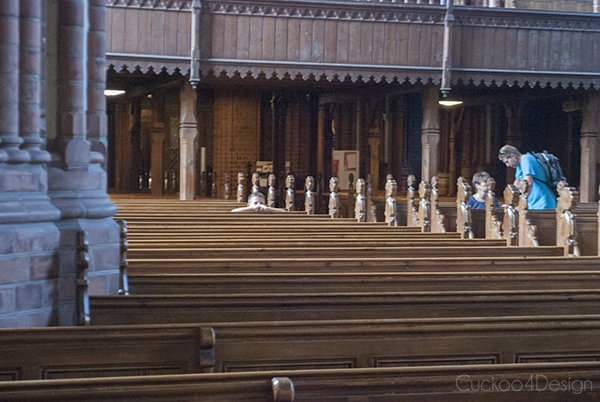 The following photos are more food eaten in Hamburg when we got back from our little day trip escapade. 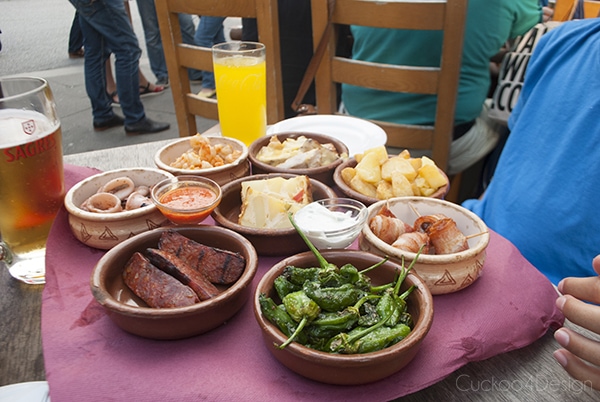 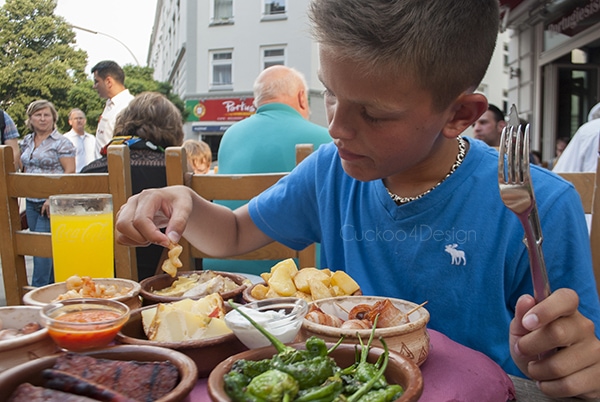 We had Portuguese tapas. which we found in the Portuguese district with all kinds of restaurants right outside the port. My dad and I had bacon wrapped dates, fried potatoes, chicken in an orange sauce, little North Sea shrimp, calamari, spicy Portuguese sausage and grilled jalapeños with a spicy sauce and I think a tartar sauce. Very tasty especially the spicy stuff, but I wasn’t a big fan of the chicken.

Below are also more tapas we had for lunch the next day at a different restaurant. We had fried squid, prosciutto ham, salami, cheese, jalapeños, shrimp, and black olives. I thought the best part was the salami and the squid. 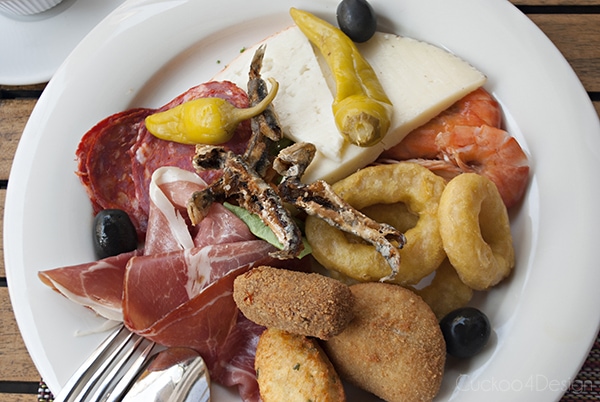 The following photos were our last dinner in Hamburg. From top to bottom my dad had Dutch herring with tartar sauce and potatoes. I had for appetizer a crab soup with shrimp. I had baked Scholle (aka flounder) with speck (bacon) and a potato salad! The crab soup was very fishy but I enjoyed it. The flounder was my least favorite dish, too many bones and overall didn’t taste like too much. 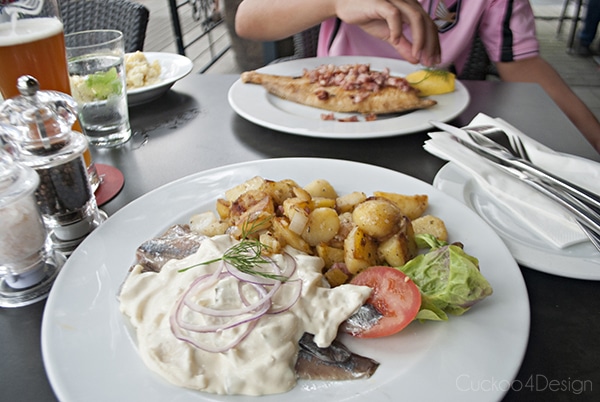 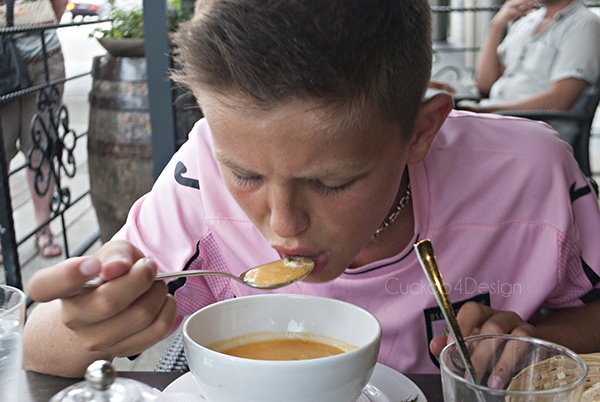 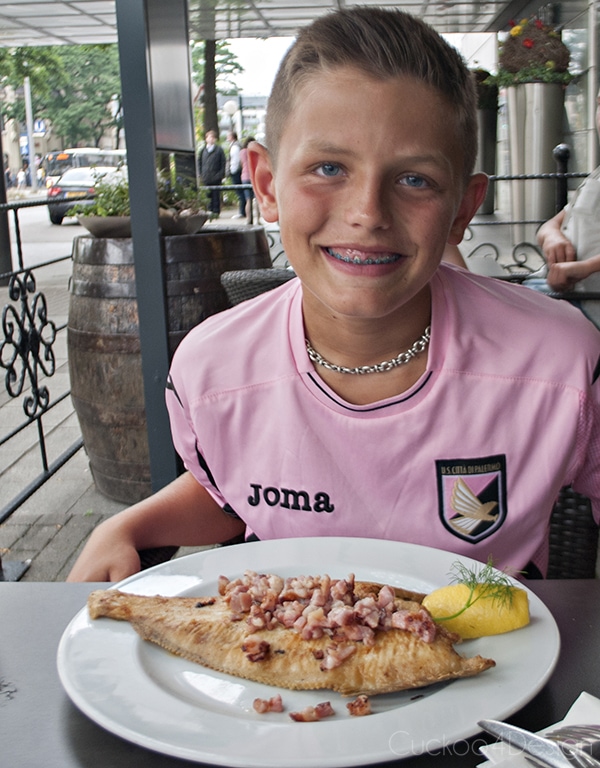 My entire day revolves around food and when I’m really hungry I even eat chicken Lo Main at 10 a.m. in the train station. Well I’d eat Asian noodles if you’d wake me up in the middle of the night to be honest because they are my favorite and since I had so much fish in Hamburg I had to get some more noodles too. Spätzle wasn’t enough dough for me. 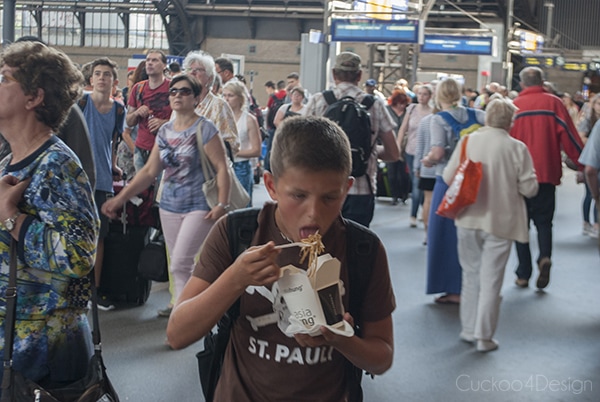 Maybe I should apologize for taking so many food pictures this time around but I love it and couldn’t help myself.

Talk to you next year. I hope I’ll be blessed again to take another amazing trip in Europe.

He’s taking the words right out of my mouth, that certainly would be nice and if you could vote and he wouldn’t know this without me telling him of course 😉 I mentioned it on Facebook already too and it would be so great to be shortlisted for an UK award, especially since I’m from Europe.

Thanks so much in advance if you find the time. It’s really quick and easy.

One more thing, I heard my son say that he is ready for school because he is sick of spending time with his sister LOL so when he says he isn’t ready for school yet that isn’t entirely true 😉

Here are more of our Germany posts:

2016
Bamberg
Toppels Upside-Down House
Schwerin and Lübeck
Hamburg – St. Pauli
2015
Ronneburg
Amsterdam (written by my son)
Switzerland: Küssnacht, Lucerne
Switzerland: Fürenalp Engelberg
2014
Baden Baden and Heidelberg
Visit to Bratislava and Mödling written by my son
Visit to Wien written by my son
My love for Würzburg
One of my all time favorite German castles
Crashing My Brother and Sister-in-Law’s New House
2013 posts:
Windows to my past
Our Church Anniversary
Vintage Bjørn Wiinblad
Loving the local watchtower
Crashing my parents house
Where does the real Snow White come from?
Visit to Aschaffenburg
Chiemsee visit
Königssee visit
Sad History lesson
Visit to Praha written by my son
2012 posts:
Cuckoo 4 Würzburg!
Random photos from our trip
my brother’s old place part 1 and part 2