It’s been a while again my friends. I’m glad only a week though but it feels much longer.
Today my son has another blog post for you that he is excited about. Got to love his enthusiasm about traveling!

Hi there my mom’s friends! It’s time for my annual blog post from my yearly trip with my dad! This time we visited Hamburg and St. Pauli. We also visited Lübeck and Schwerin but that is for another day 😉
I know I shouldn’t start a post like this but Hamburg isn’t even close to being my favorite city I’ve visited, but there were many beautiful sights and I had a great time. Even though it didn’t go too smoothly at times.

The first day after we got off our train at 11 a.m. and when we arrived at the hotel, the rooms weren’t ready. Then we saw signs that said there was a church nearby, so we went to see it but it was closed and we had no idea where we were. We started to walk aimlessly again and ended up in a middle eastern district but finally found our way back to the hotel again! At least the hotel was ready by then!

We had another problem, we had no idea where to go so we sat in the metro and figured out the metro system in ten minutes! We figured the town hall, aka Rathaus, would be where all the action is so we took the metro to the Rathaus. 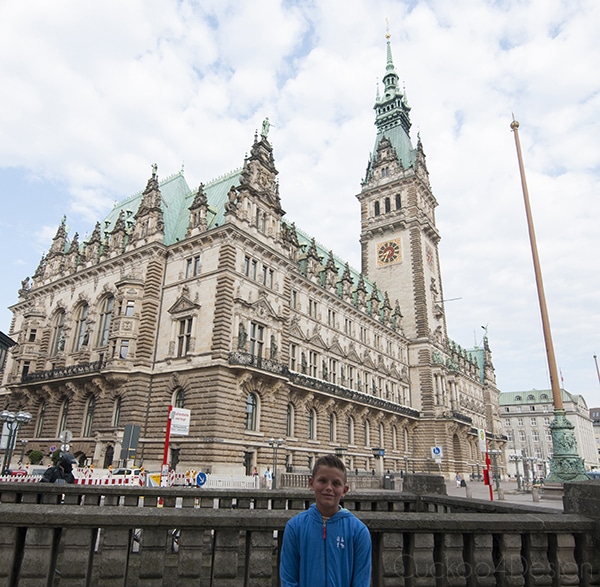 My mom’s new wide-angle lens really came in handy for taking our photos of all the huge pretty buildings. 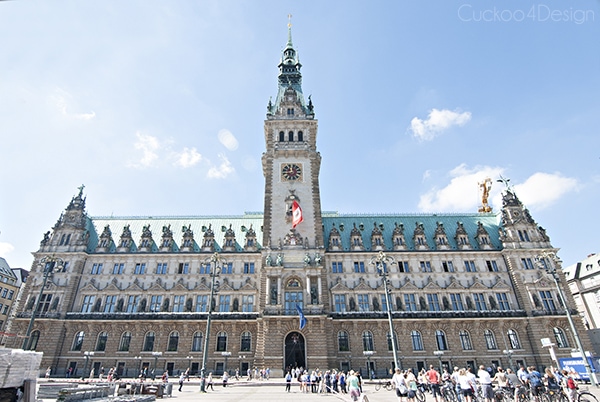 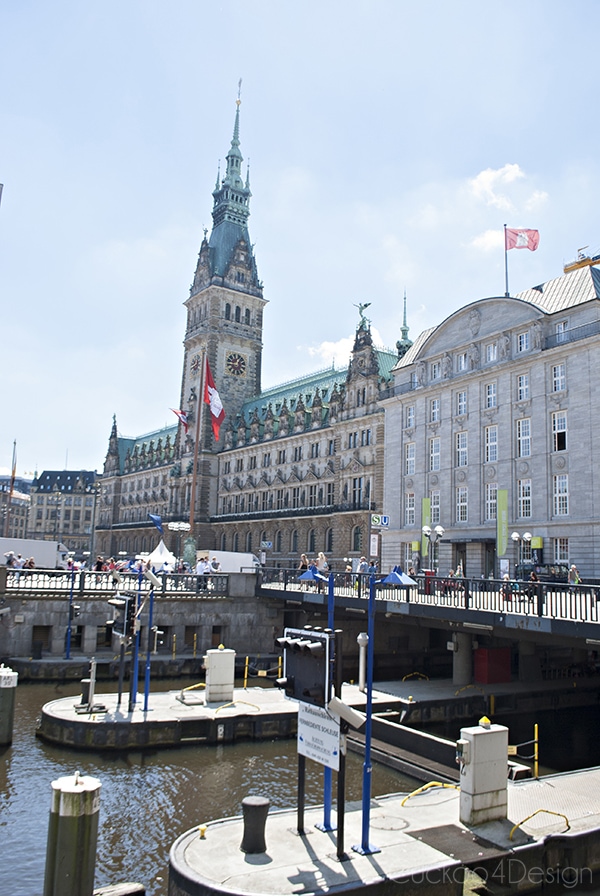 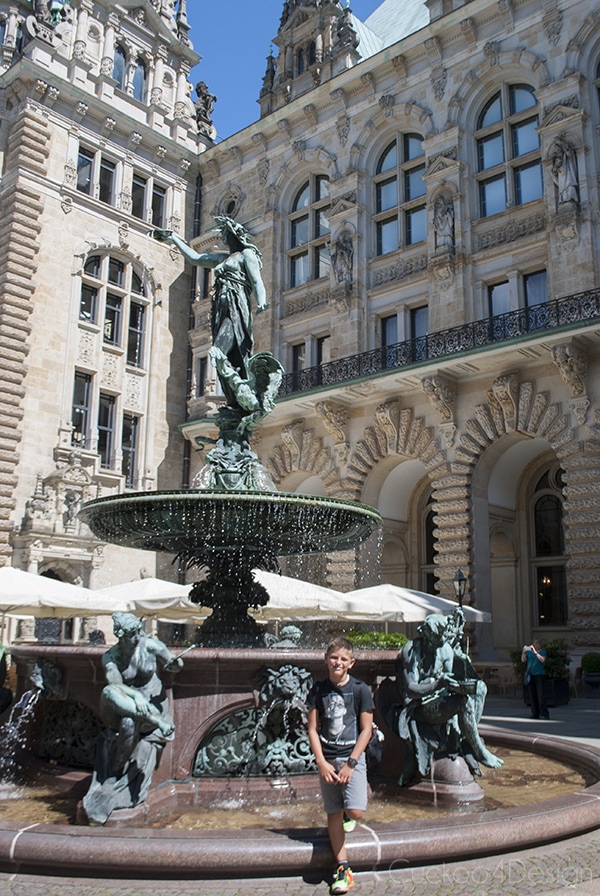 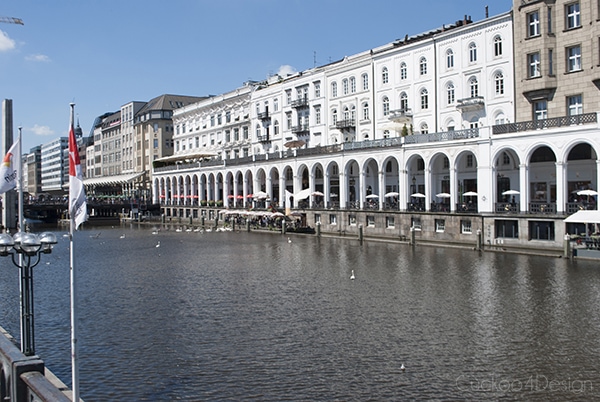 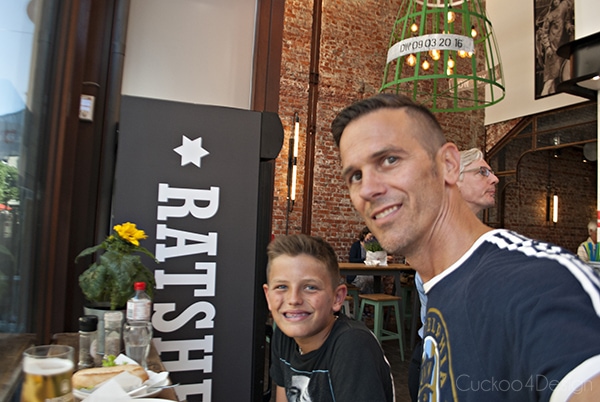 Then we walked around to find some lunch. There were only like five restaurants in the Rathaus area. Eventually we found a fish sandwich shop and it was amazing, especially since I hadn’t eaten since 6am and it was 2pm. 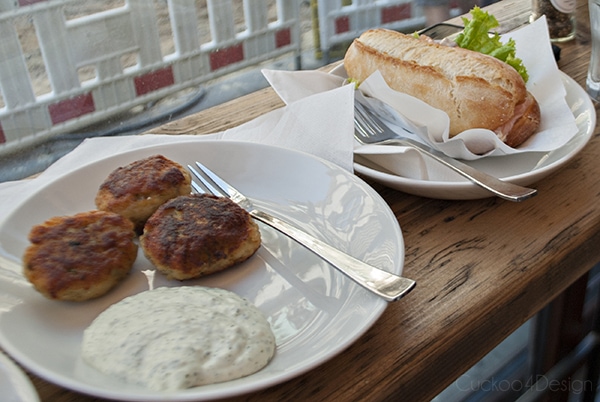 I had (from left to right) fishballs with tartar sauce (Remouladensauce in German) and a smoked salmon sandwich with lettuce and horseradish.

After lunch we explored the harbor and it was so interesting to see all the different sized ships. 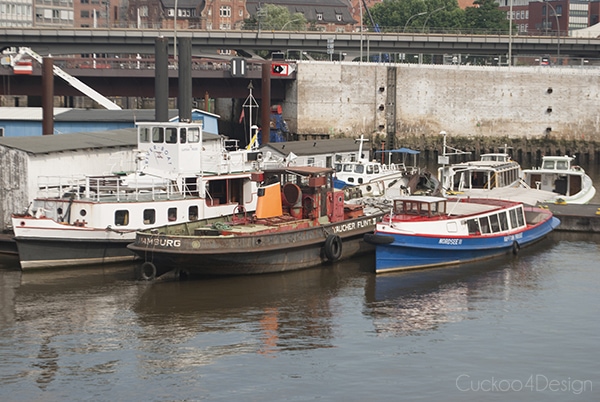 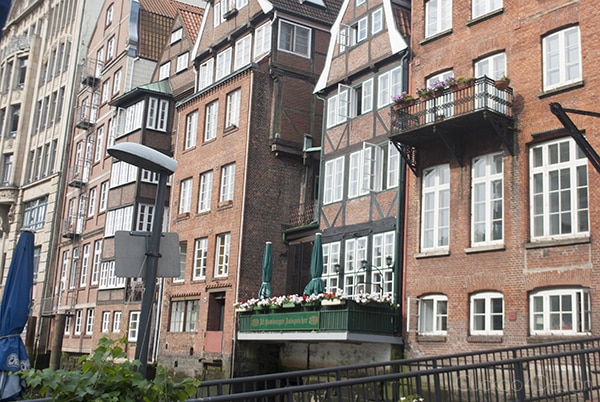 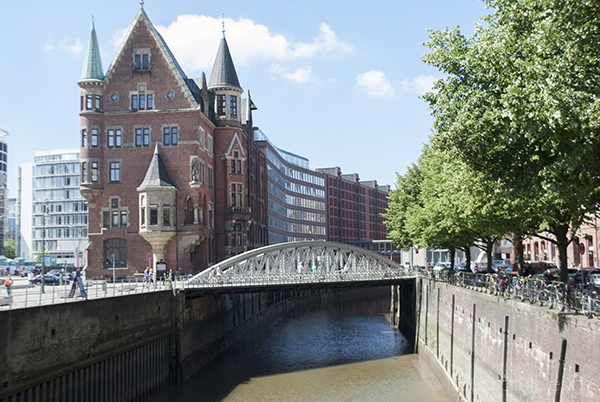 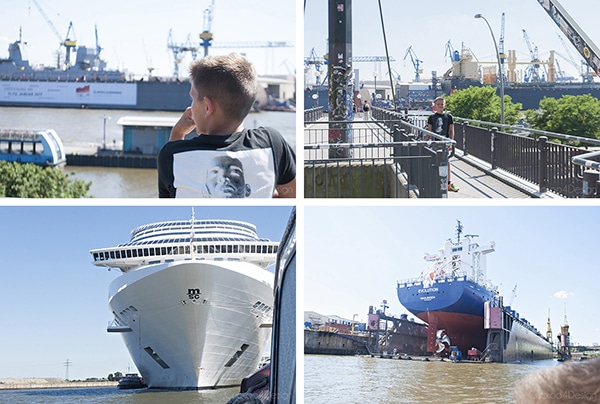 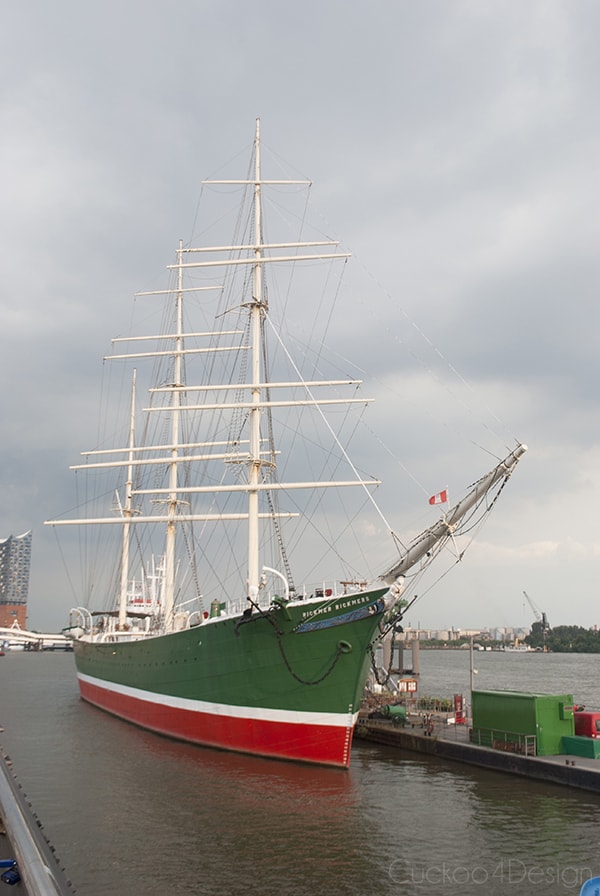 For dinner I had Hamburg-style Labskaus with fried eggs, gherkins, Rollmops, aka Bismarck herring and mashed beet root salad. My dad had a pulled beef sandwich served on a hempseed roll with barbecue sauce. His wasn’t really German at all. 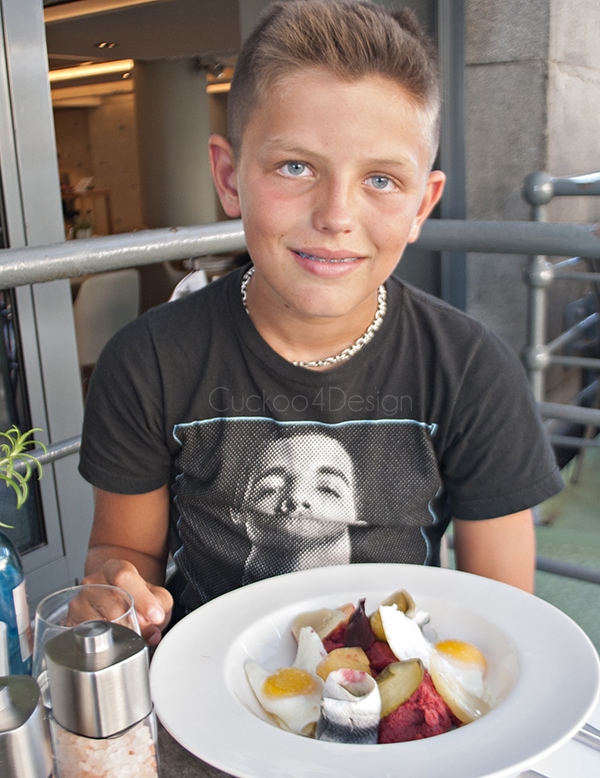 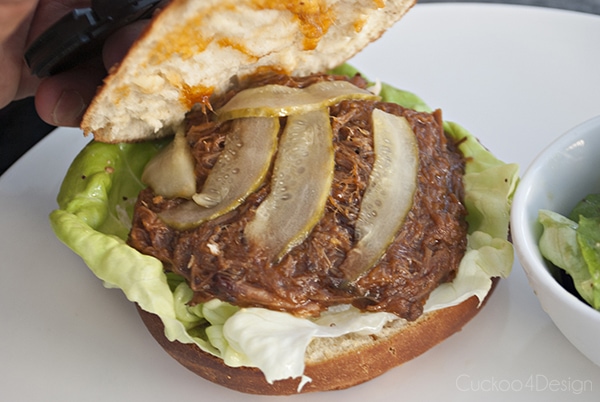 We ate at VLET an der Alster you can see a photo of the restaurant below: 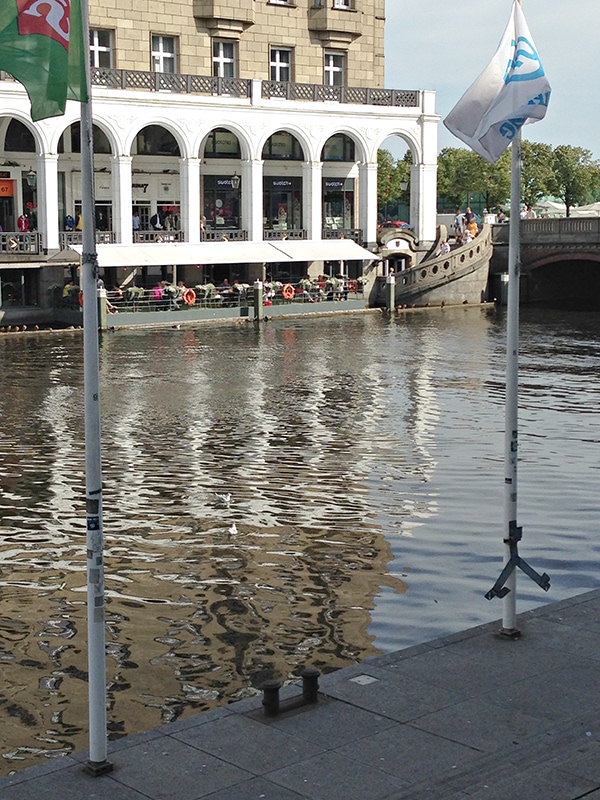 St. Pauli is in the middle of Hamburg and has a famous red light district called the Reeperbahn. I’m almost 14 and I know what that means but I don’t care, what I do care about is their soccer team and stadium though.

Seeing all the dirty buildings, party people, drug addicts and homeless people was interesting but it’s not why I didn’t like Hamburg. Germany is usually so clean! I can’t always just see the pretty parts. 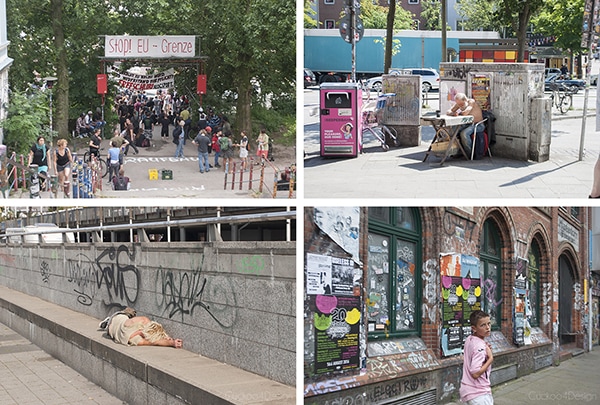 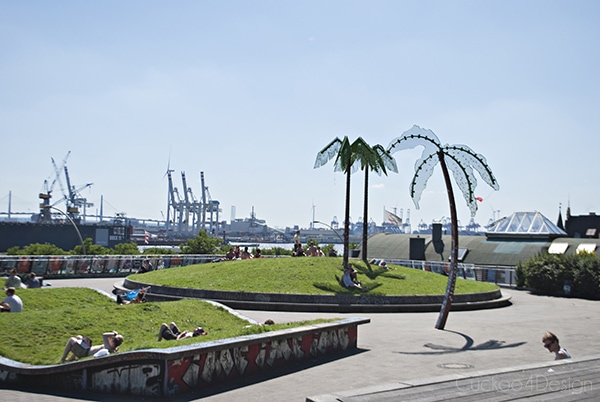 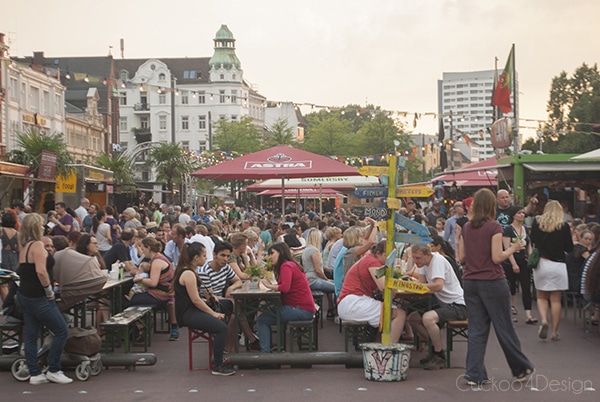 FC St. Pauli and their Millerntor-Stadium

St. Pauli is considered to have the best fans in all of German football (soccer). And seeing the people in St Pauli I can imagine how crazy their fans are. 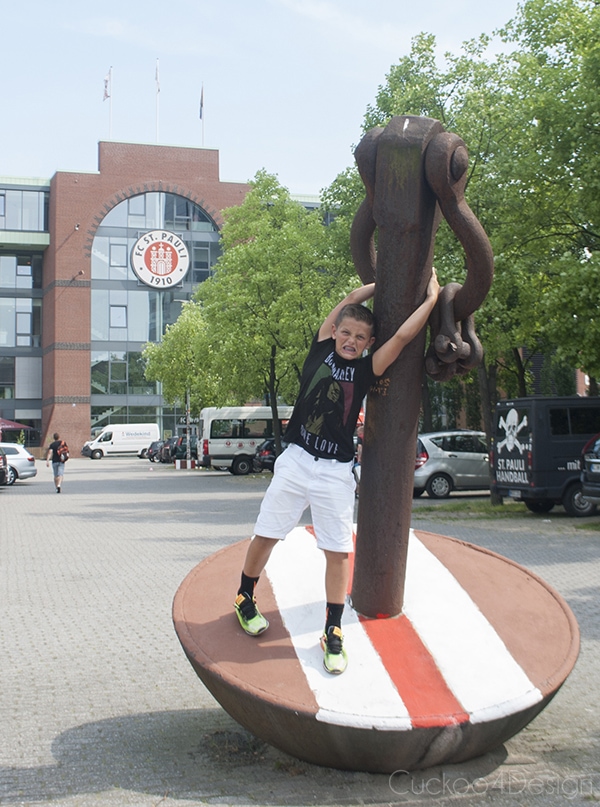 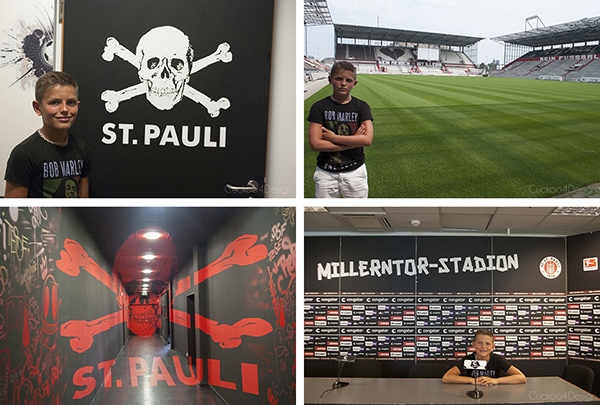 During the first week on vacation in Germany there were four attacks throughout Germany. The shooting in Munich was actually during our time in Hamburg. When this stuff happens I just try not think about it happening which is what my mom does sometimes. But it’s hard when your train to travel back home is late because of a “suspicious man” on the train tracks.

How about that Labskaus my son had for dinner? I’m pretty sure he wouldn’t eat that if I’d put that in front of him for dinner at home. Traveling sure makes him want to try all kinds of different things. I love seeing him explore like that and not shying away from eating strange local dishes.

We’ll be back soon with another one of my son’s post.

You can read more travel posts below:

2015
Ronneburg
Amsterdam (written by my son)
Switzerland: Küssnacht, Lucerne
Switzerland: Fürenalp Engelberg
2014
Baden Baden and Heidelberg
Visit to Bratislava and Mödling written by my son
Visit to Wien written by my son
My love for Würzburg
One of my all time favorite German castles
Crashing My Brother and Sister-in-Law’s New House
2013 posts:
Windows to my past
Our Church Anniversary
Vintage Bjørn Wiinblad
Loving the local watchtower
Crashing my parents house
Where does the real Snow White come from?
Visit to Aschaffenburg
Chiemsee visit
Königssee visit
Sad History lesson
Visit to Praha written by my son
2012 posts:
Cuckoo 4 Würzburg!
Random photos from our trip
my brother’s old place part 1 and part 2