Oh guys, where to begin. I have been struggling with writing this post. There are so many things I should explain, things that aren’t done yet and parts of the room I don’t like and might not ever be ok with but lets face it, it’s our family room… a room that serves so many purposes and I shouldn’t take it all that serious. At least I have come to the conclusion that I just shouldn’t. I get serious about my living room, so it feels good having a room that serves everyone in the family and it helps me putting into perspective what I have already gotten done when I feel like things aren’t working out the way I want them too.

I’ve also been feeling frustrated with my blog posts lately. I get the increased feeling that I’m talking to myself. I don’t want to sound miserable or anything, I know that’s not true because I see that you guys open my emails but I miss hearing from you in the comments. There are a lot of new people around that I’d love to hear from and I also miss hearing from my long time followers. You have no idea what it means to us bloggers to get the occasional “hey what’s up”. Social media has become so fast paced that I really miss a nice blog engagement.

Well anyways I don’t want to get sidetracked, or wait maybe I do because I don’t really like talking about our basement. It has frustrated me so much. Lets just begin somewhere at the beginning of my blog and what the basement looked like back then. A cluster of old outdated and unwanted furniture from the house. I never liked it but it was ok for the kids to play in and hang out. Let me refresh your memory. Have I mentioned how hard it is to take pictures in a completely dark basement? Well it is! 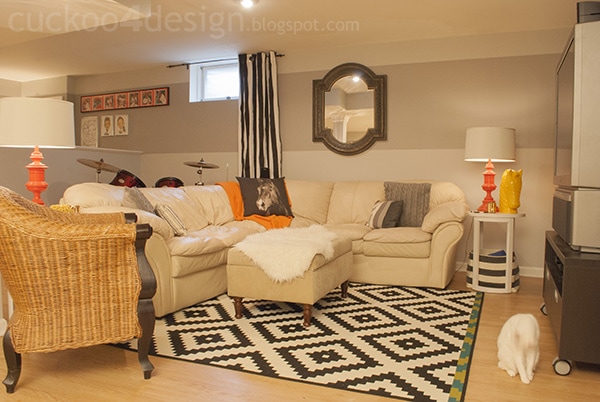 Ugh that hated couch. Remember I recently made tassels out of it’s old remnants? Click HERE to see. That was really satisfying.

The couch was small and was almost right under the ugly basement window.

We threw the couch out and brought in the new couch from American Signature Furniture (click HERE) which is much bigger and had to be moved to the other side of the room instead of the same location of the old small sectional. I like the layout like this so much better. So much cozier, don’t you think so? That’s not the part that frustrates me. It’s my favorite part. We all love hanging out on the couch.

My husband loves his favorite sports illustrated magazines above the new couch. 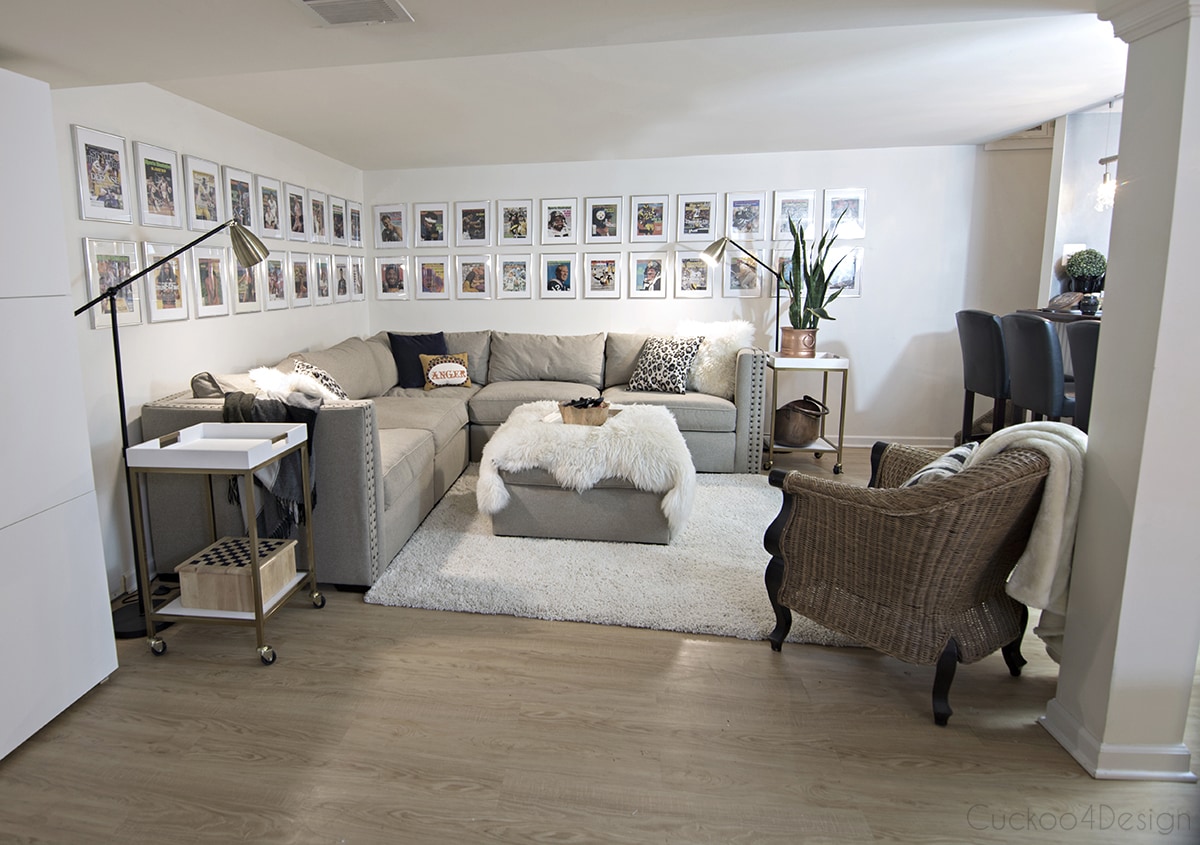 What frustrates me is the other side of the room. One part was the TV dilemma which I posted about HERE. If you are new around here you should read it! They still refused to give me a new TV and Geek Squad came and repaired it by giving me a new screen and taking all the parts out of the broken TV and putting it into the new screen shell. Makes no sense at all. And I should also mention that the LG repair service was angry that they also ordered a new screen but were a week late. Oh well at least I got a little satisfaction that they were also angry. Lets just not bring up the conversation I had with that lady on the phone. I did get a kick out of it though. 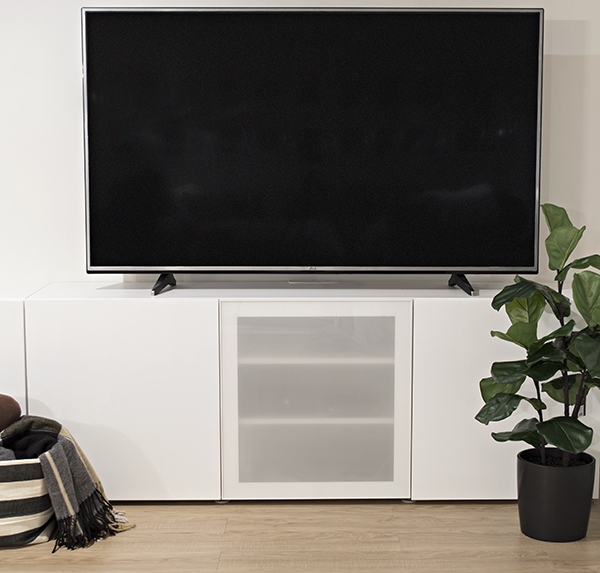 So when we moved the couch, we had to move the TV which you can see above. 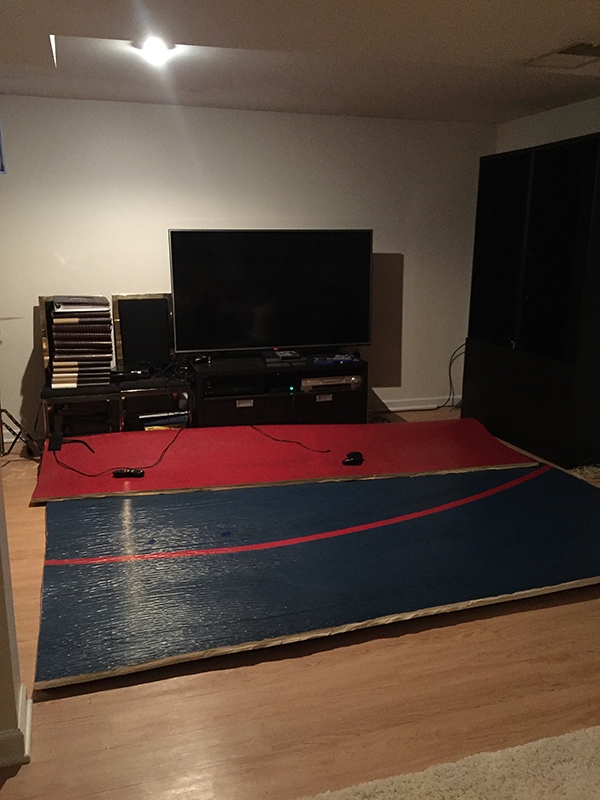 That ugly red and blue thing is my husband’s old and yucky wrestling mat that he is so attached to. Don’t ask… I know… I get bothered by it daily. He needs it to exercise!!! I wonder how he ever worked out at the gym before. I mean a regular floor and good sneakers just doesn’t do it for him. I guess it’s like his very own giant memory foam security blanket that he can’t let go of. Below you can see the old TV giant and the brown Ikea cabinets which I ended up hating. 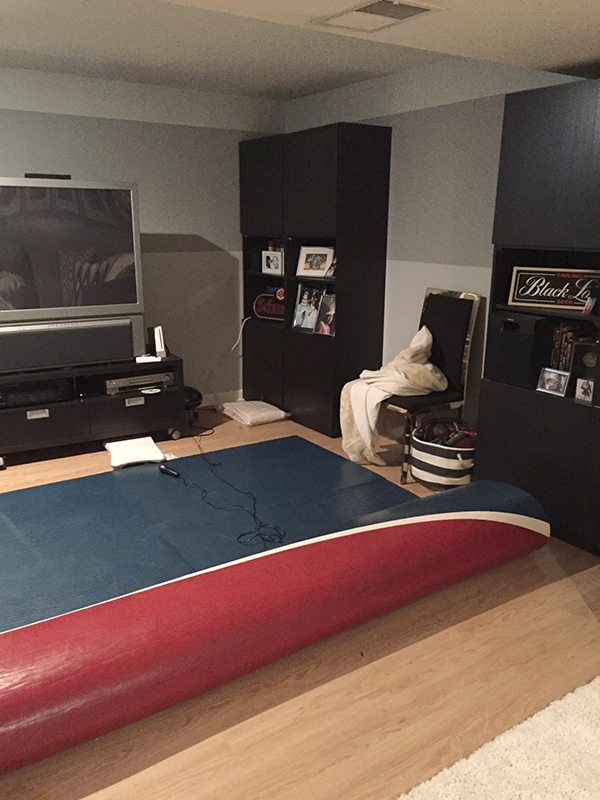 I originally had it in my mind that the Ikea Besta storage system was going to be best in dark brown which we also have in our son’s room. Let me tell you that I hate, hate, hate that dark color and the main reason is because it shows every single piece of dust and dirt. I thought it would be wonderful for my kids dirty fingers but no, it was just a dark and dingy hassle. 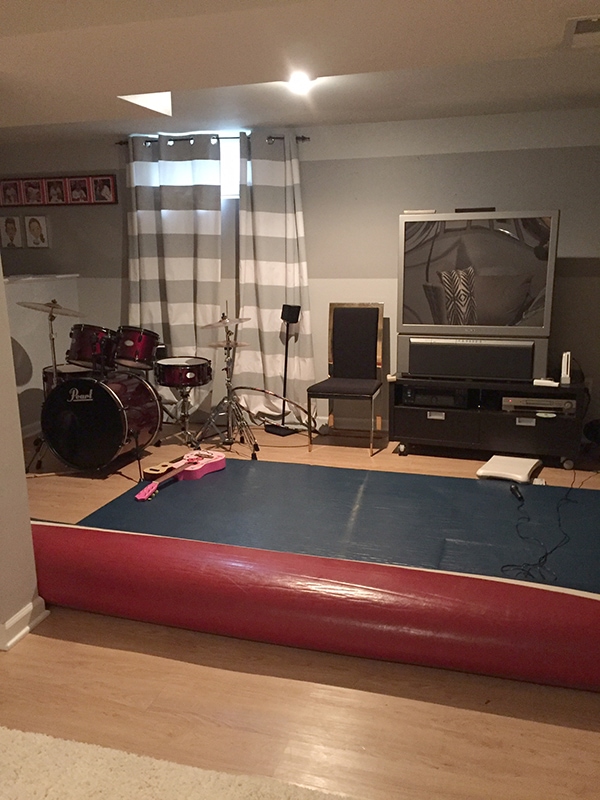 So I decided to paint the ones I had and buy additional storage for both sides. (If you are wondering where my son’s drum set ended up, it’s on the other side by the bar) I had it in my mind that I wanted this large pretty built in shelving unit with lighting, molding and pretty shelf styling. When I had painted the old parts, bought the new parts and bought the wood and molding for the top and base, I faced several obstacles that I hadn’t thought about.

That’s when I decided I was going to go with doors everywhere. Not for the looks but for the storage. I’m quite aware of the fact that it’s a sea of white but I really love it so much better than before.

It’s a pain to align all the doors. Not an easy task either. 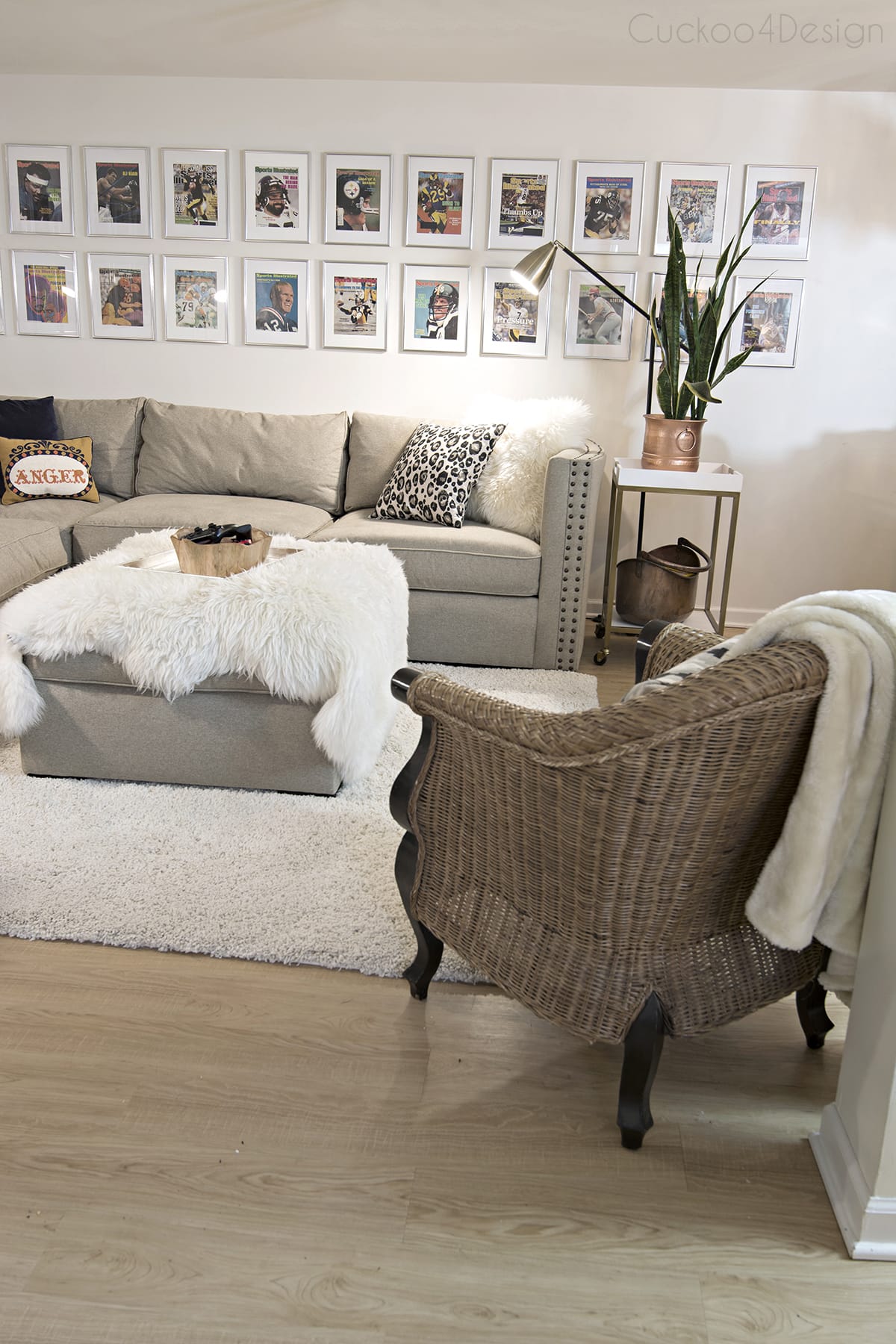 Here is what I’m still super frustrated with figuring out though. Do you see the bottom of the cabinet? (Oh and don’t mind the stars which mark the beginning of my Christmas decor) I can’t figure out how to handle the uneven parts of the floor or how to make the cabinets meet in the corner. The Ikea Besta system which I used, has these adjustable legs to make it level but our floor is so uneven that I have a quarter inch in some spaces and an inch in others which doesn’t make it easy for any type of small waterproof molding. It’s just too uneven. 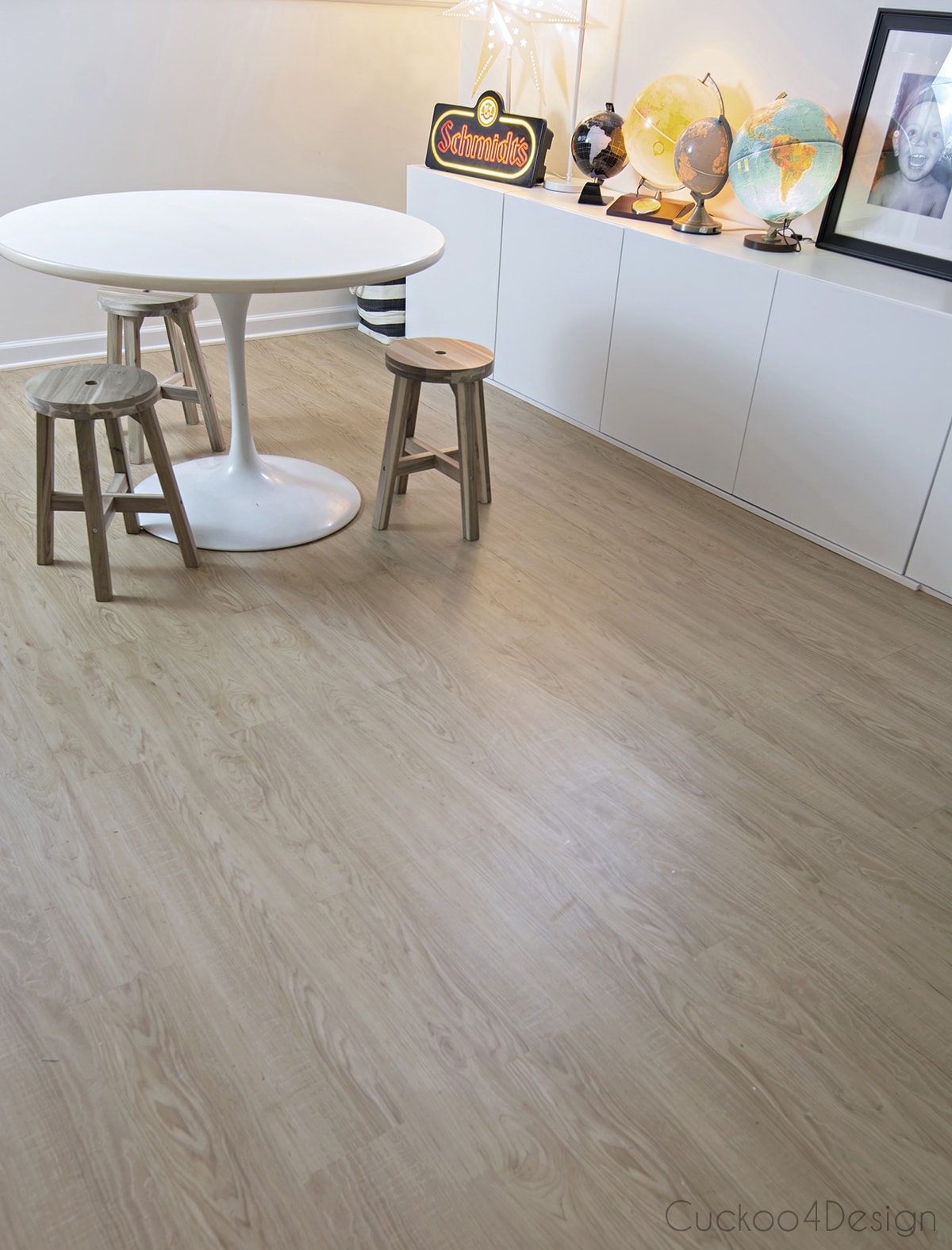 I placed some loose molding under it. You can see it if you look close above. That side isn’t all that bad though. The other side is way worse. 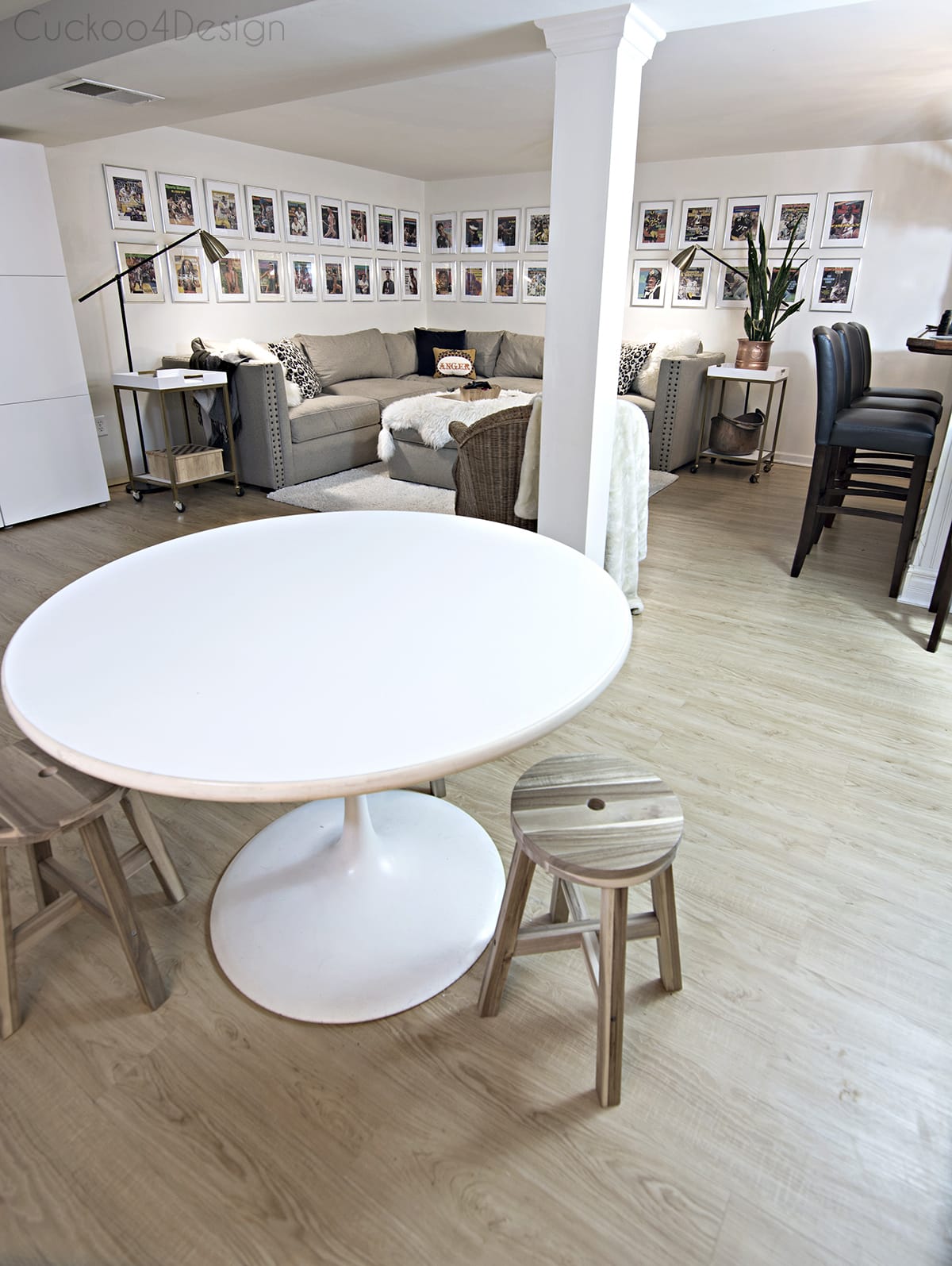 If you are wondering, the stools are from Ikea and I love the wood grain. 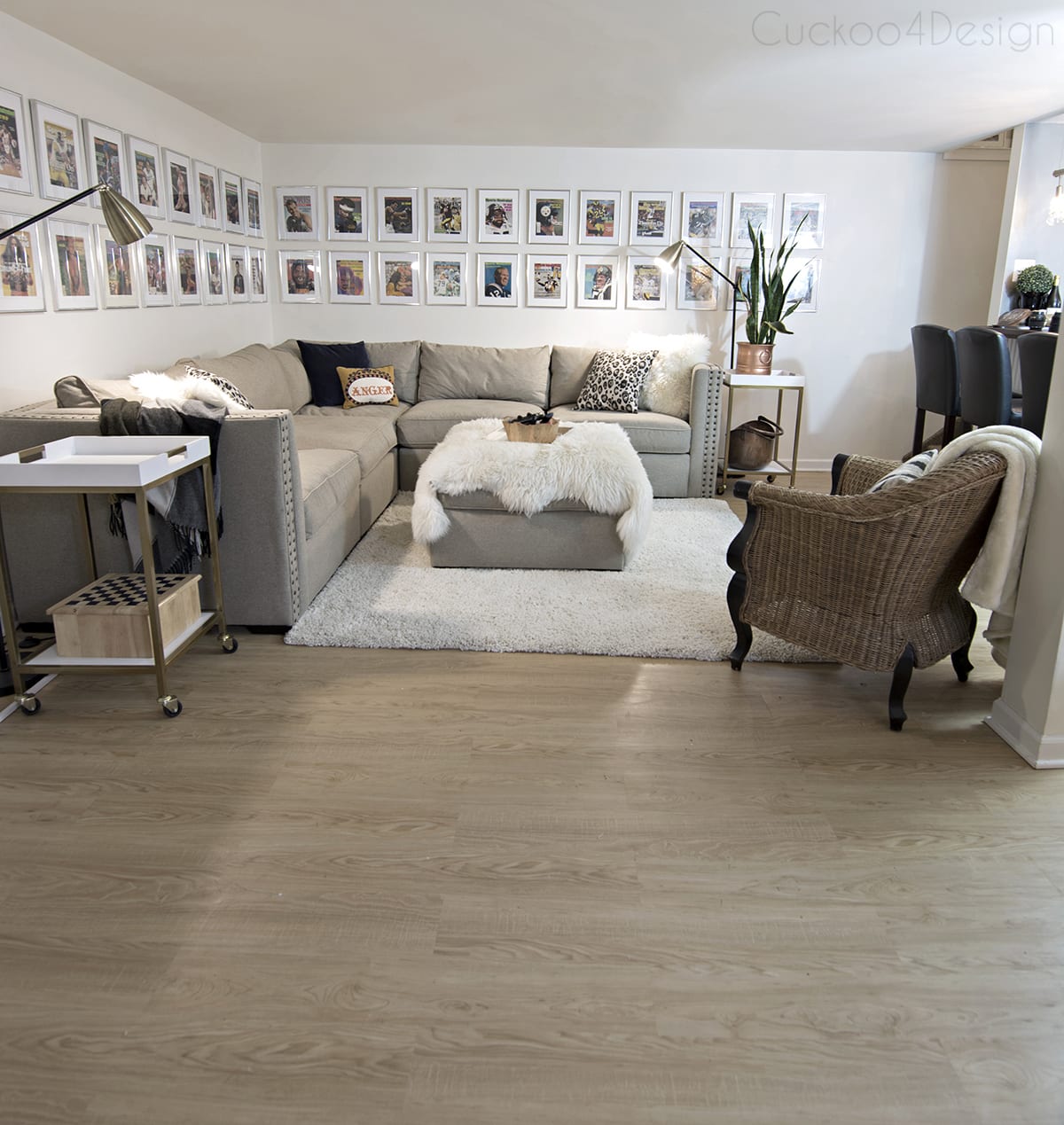 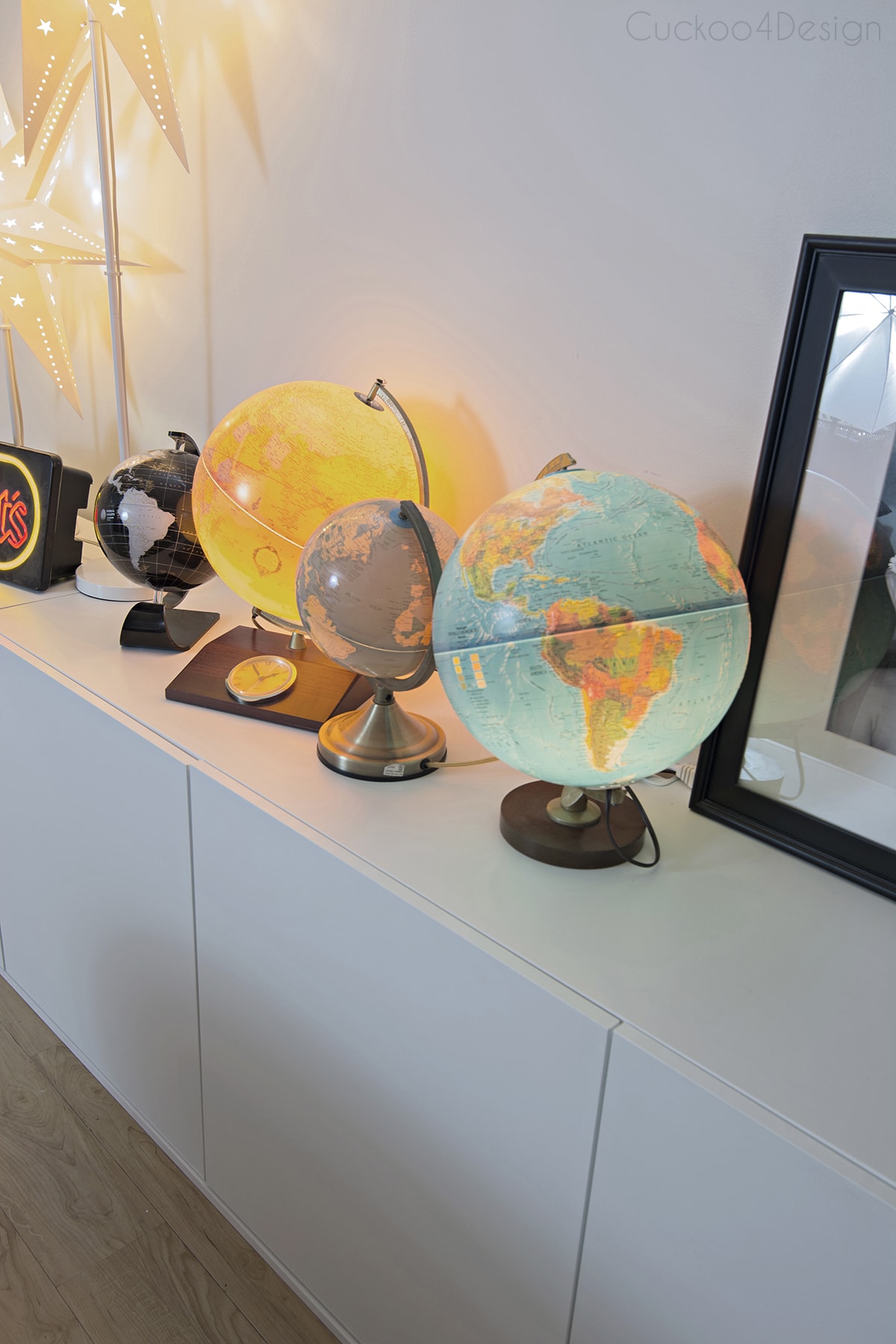 This is the bad side and part of the cabinet I can’t figure out exactly how to meet up right. Oh and the TV still needs to get mounted to the wall. Just look at the molding at the bottom. It doesn’t fit all the way to the left. Makes me so mad. 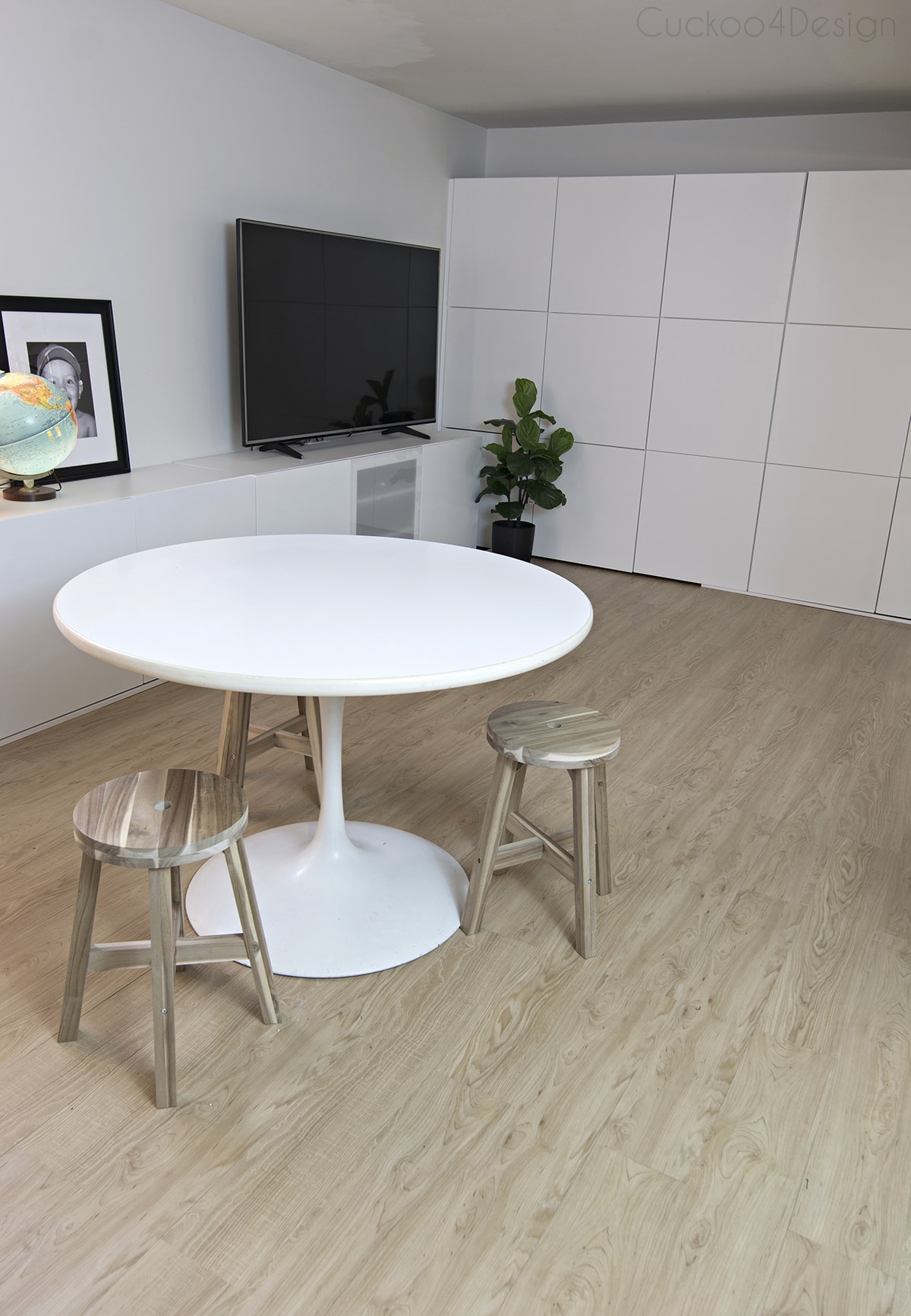 You can also see the air vent part on the right side of the cabinet which made it so hard to use nice molding or elevate the cabinet more. And the faux fiddle leaf fig tree I bought (click HERE) is now hiding the corner issue of how the cabinets meet which I still need to resolve. The tree also brakes up all the white which is a good thing. 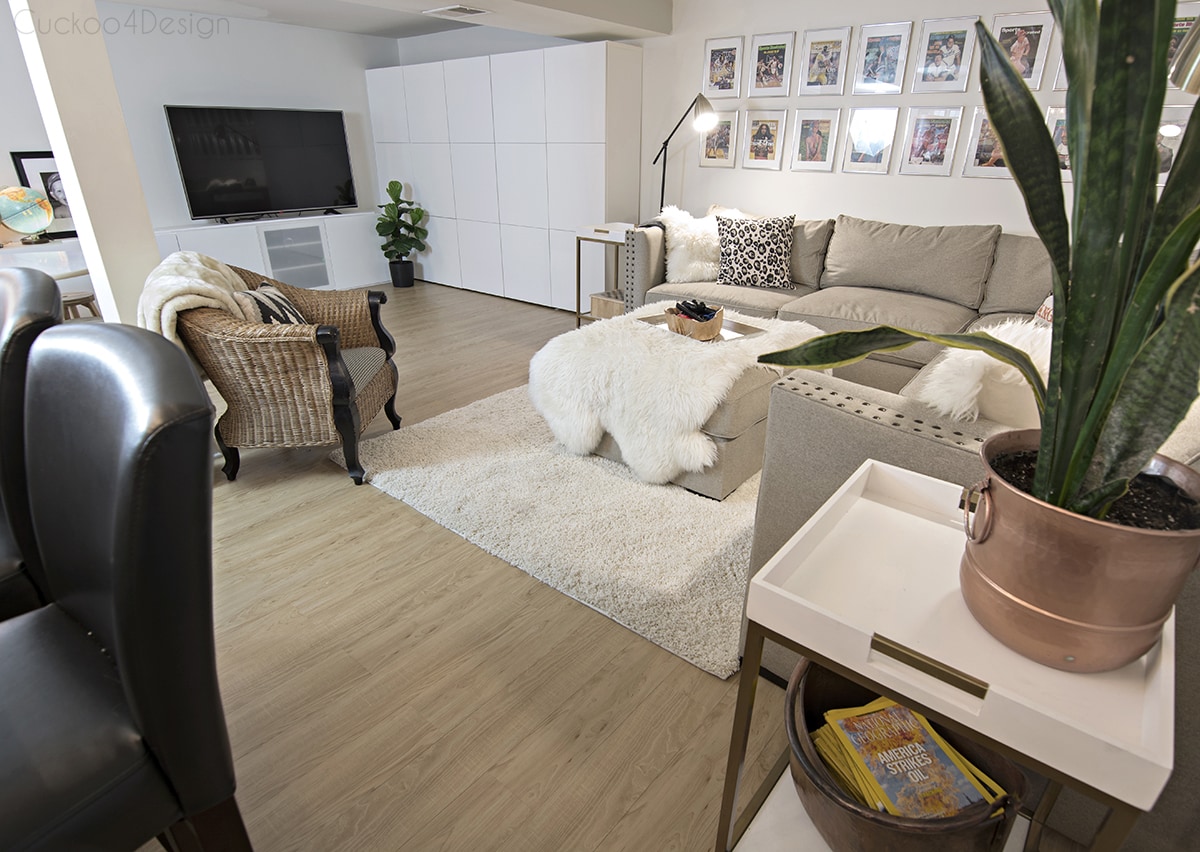 (The end tables are discontinued bar carts from Target and I love them. They are the perfect size! For more source info scroll to the bottom of the post) 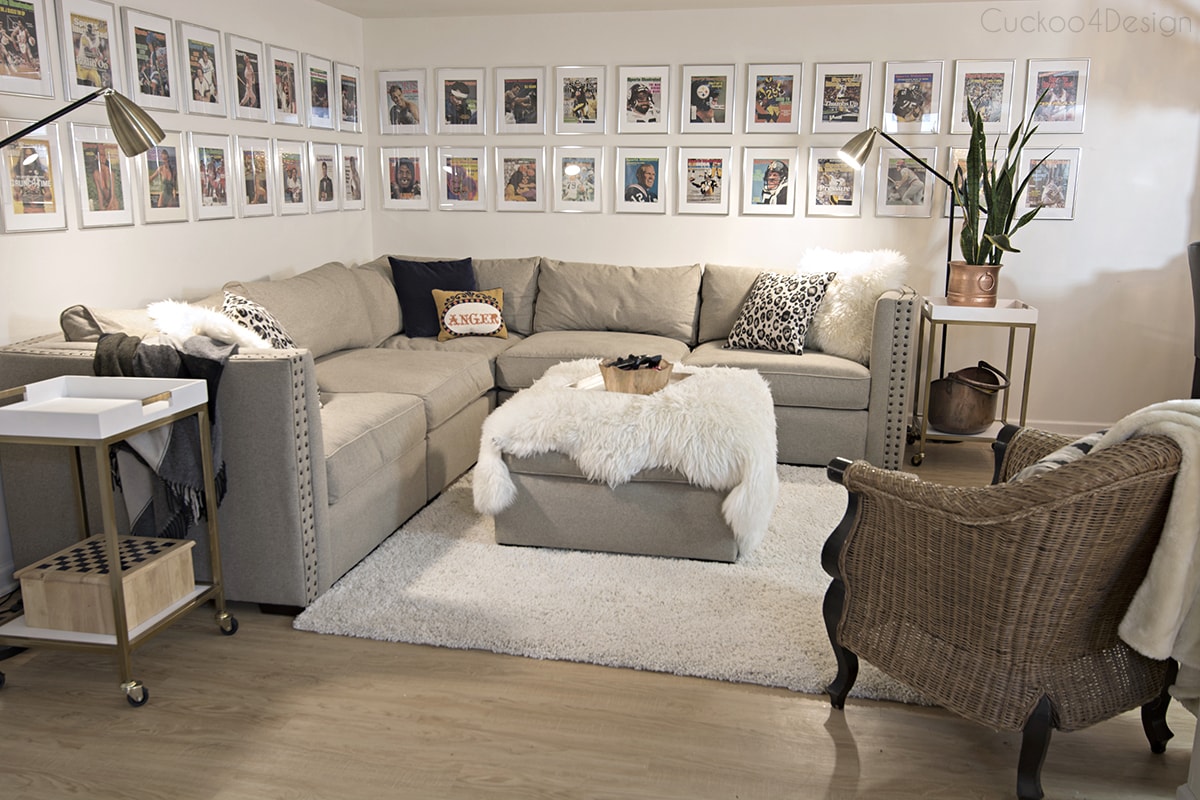 This other side of the basement is for the kids crafting and board games now which are stored in the cabinets. I know some of you hate all the white but I just love it. It’s fresh and all the dingy dark basement stuff is gone. And most of all the kids love it too.

If you are wondering where the mat is, it’s still there, I just shoved it out of the pictures.

Painting those shelves was not fun either. I had read several tutorials where people recommended to use Zinser shellac based primer for Ikea cabinets. In my opinion it doesn’t work all that great and the paint is already chipping off in some spots. I was bitching up a storm. I had planned on writing a tutorial about it but decided not to after I saw the chipping. Don’t get me wrong, the primer is good but It’s just not the best idea to paint laminated Ikea furniture. I wish I would have just bought them all new and sold the old ones on Craigslist.

Here is another ugly during and before photo. 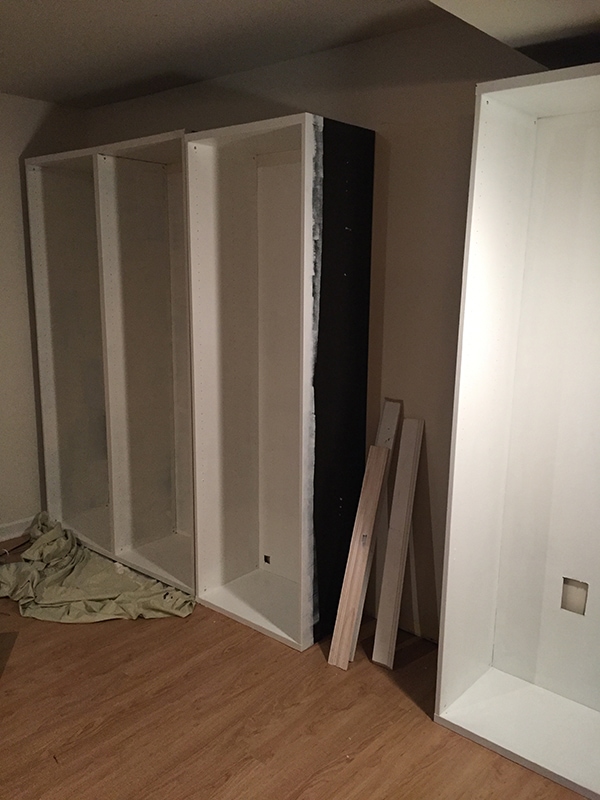 So what’s left to do? Here is a list:

I have come a long way to make this space more usable and functional and I need to keep telling myself that. And like I said earlier, I’d love to hear from you guys.