For those of you who aren’t into cat posts (click HERE if you missed Monday’s cat post), this will be the last one for a while. Next week is spring home tour time. So stick around for that. It kind of cracks me up that we are sharing spring tours because with all the snow we got yesterday it now looks nothing like spring.

The reason I have another cat post for you is because my husband and daughter did something really impulsive which I hinted to on Friday already and some of you (my mom included) might not understand how we could adopt another cat so soon after our beloved Heidi’s death.

So let me explain. For him it wasn’t that soon because my husband and my daughter wanted to adopt again after Monkey died a year ago (click HERE to read about Monkey). It’s almost silly because my husband didn’t want Monkey our former porch cat. He was so mad at me that I befriended her and ignored her completely. “We don’t need another cat…. I don’t want an indoor/outdoor cat… she’s wild…” you name it. He had all kinds of excuses. Then I went to Germany and told him that I’d be really mad if something happened to her and that he’d better be nice to her and take care of her.
When I returned they were friends and he had found a garden buddy in her. He actually ended up being just as upset as I was when she died of sudden kidney failure and we had both thought that we had a young cat that would be around when our old cats died. We never expected her to die so young.
He had thought about adopting a young cat right then and there but since Heidi started acting strange and her health was getting worse, I told him it wasn’t fair to her to be stressed out at such an old age and I didn’t want her to pee everywhere because of being stressed out.

Then he recently saw a cat he liked at the “egg lady’s house” where he goes to buy eggs from free range chickens. He said he really wanted to bring it home and I said no. A.) The cat is taken care of and one day we should get one from the shelter and B.) Heidi is doing even worse.

And on top of it our daughter had been asking for a guinea pig and I’ve always said no. Not because I don’t like them, I love them but I didn’t want an animal that sits in a cage. It would end up being my responsibility to take the poor animal out and play with it because the kids are in school all day. I just can’t commit to that. Then she begged for a kitten or cat she could play with since our old cats don’t want to anymore. I adore snuggling with them but they don’t want to have anything to do with our daughter.

So when Heidi died and we were upset, my daughter asked if they could maybe just look now and I said yes. I had asked them to just please not come home with a kitten.

She was brought to the rescue group as a 2 month old kitten. I guess it’s not always true that kittens get adopted out easier because nobody wanted her. 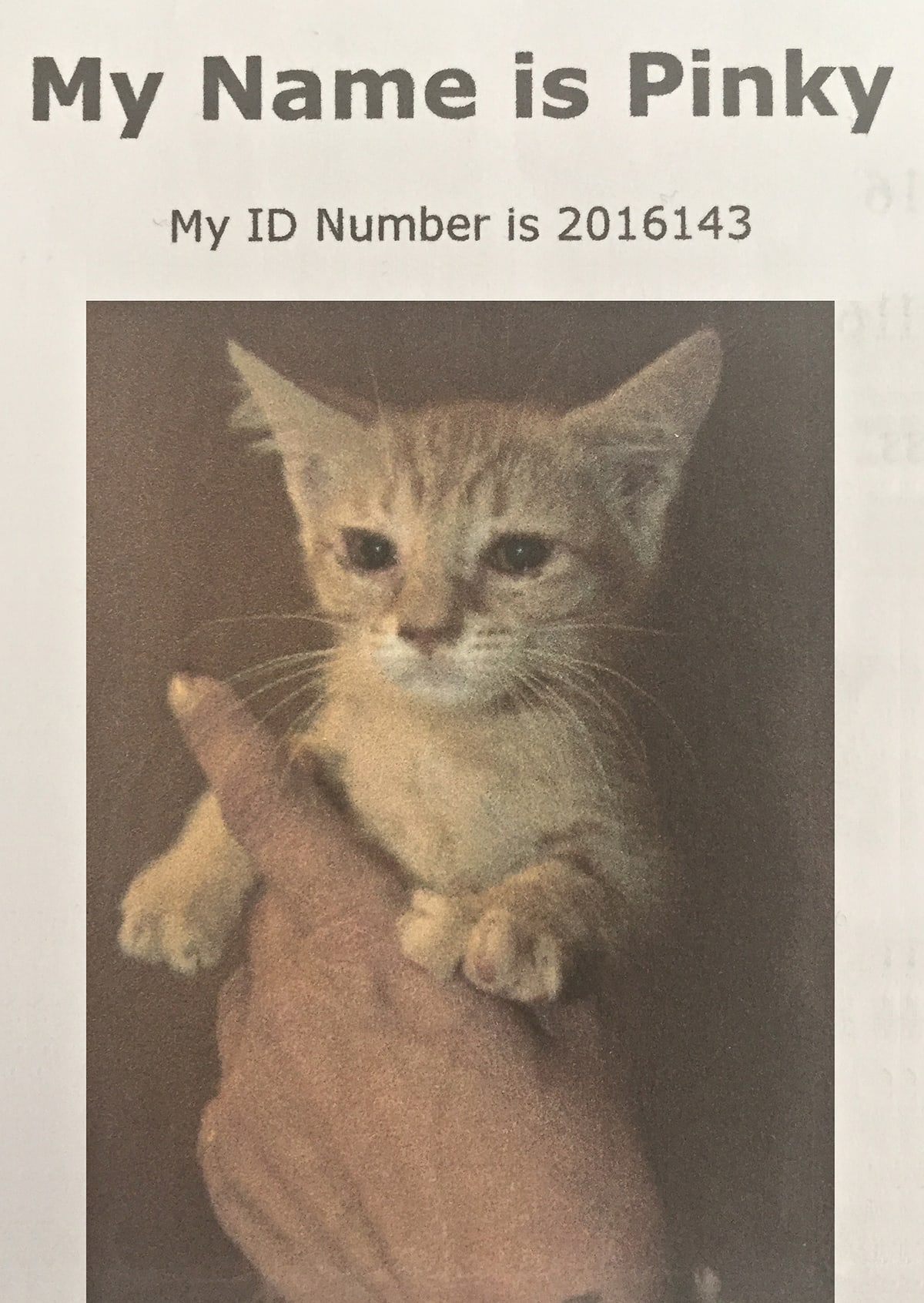 She pretty much spent her entire short life so far in a smelly windowless room with about 25 other cats at the rescue house. At least we knew she’d get along with other cats but that’s about the only thing she knows besides thankfully using the litter box.
It’s complete sensory overload for her at our house. We are keeping her confined to our bedroom and bathroom for now and she is so amazed and interested in everything. The snow falling outside, the shower, sink faucet, toilet, toys, wet food, kids, playing… you name it. She loves it.

I took her to the vet on Monday. Look at her riding in the car with me on the way home from the vet. 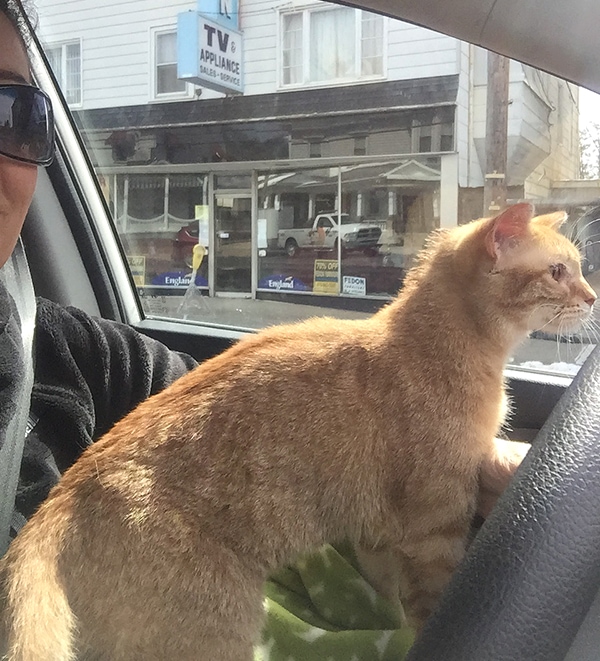 According to the vet she needs to still be confined for at least another two weeks if not longer since she has a cold and she might have some parasites but I didn’t get the results for that yet and don’t want to risk my other cats’ health. She also hasn’t had the right nutrition a kitten needs while growing up at the rescue which causes some health concerns now. I hope getting her regulated on some good age appropriate food will help her now.

So lets see. She’s getting really antsy in the room though and wants to see what is behind that door where we disappear all the time.

My daughter named her Maya in honor of one of my favorite childhood characters as a child. I loved Biene Maja (the bee Maya). She even has only three toes just like the bee. 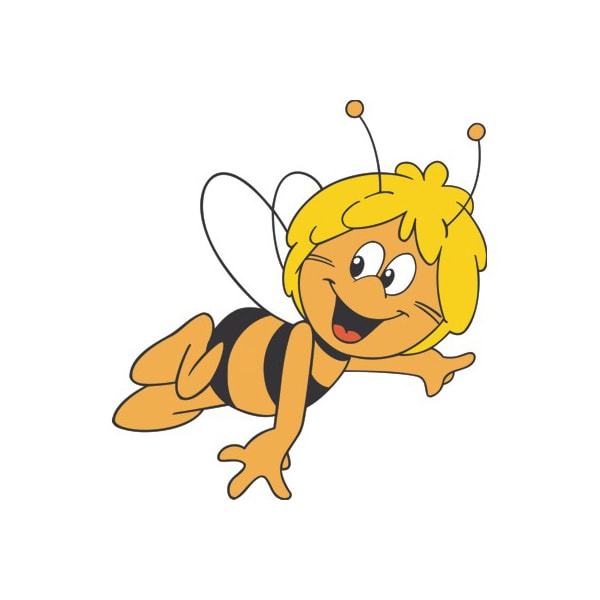 She’s also discovered modeling for the camera and her permanent concerned and sad look is just adorable. 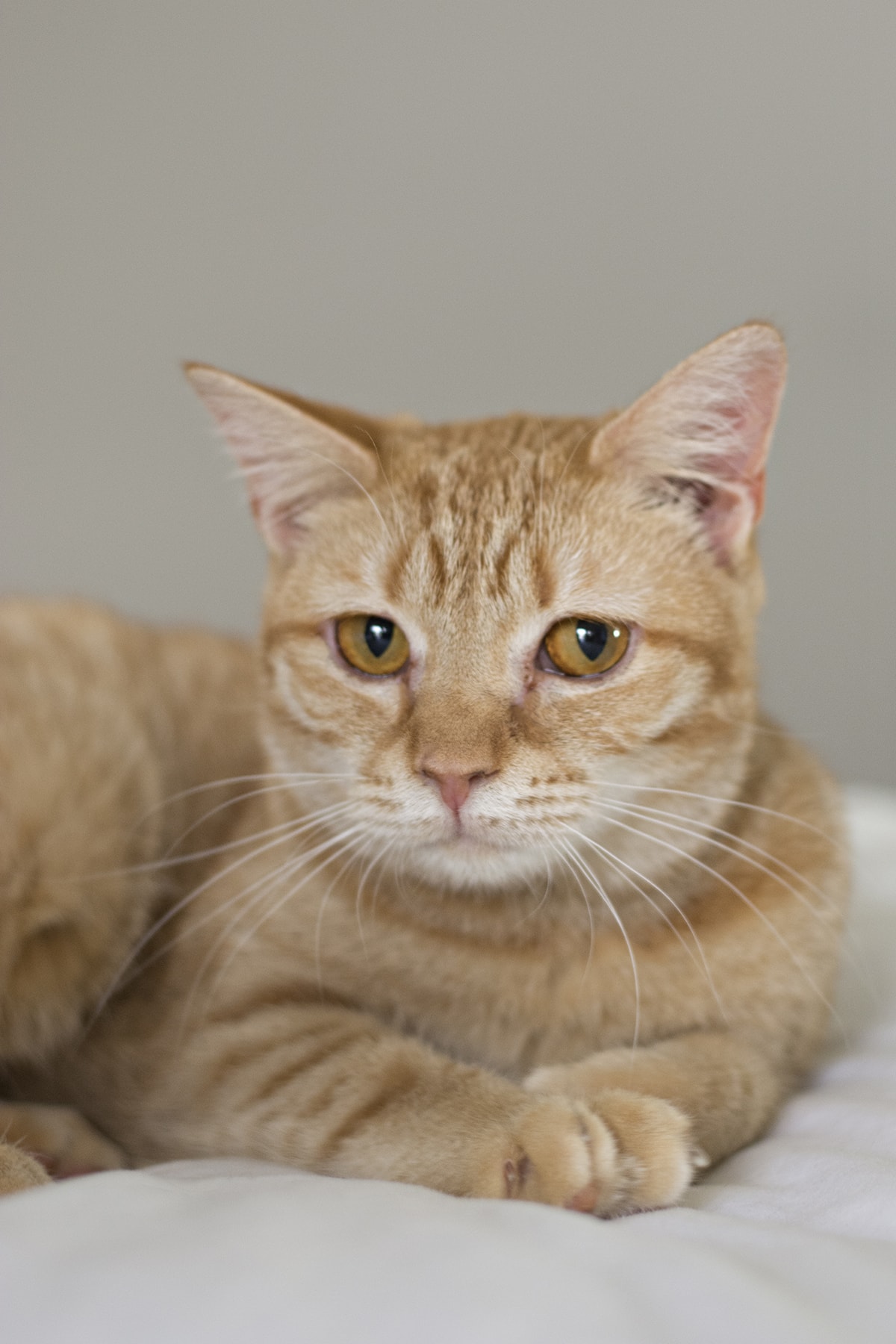 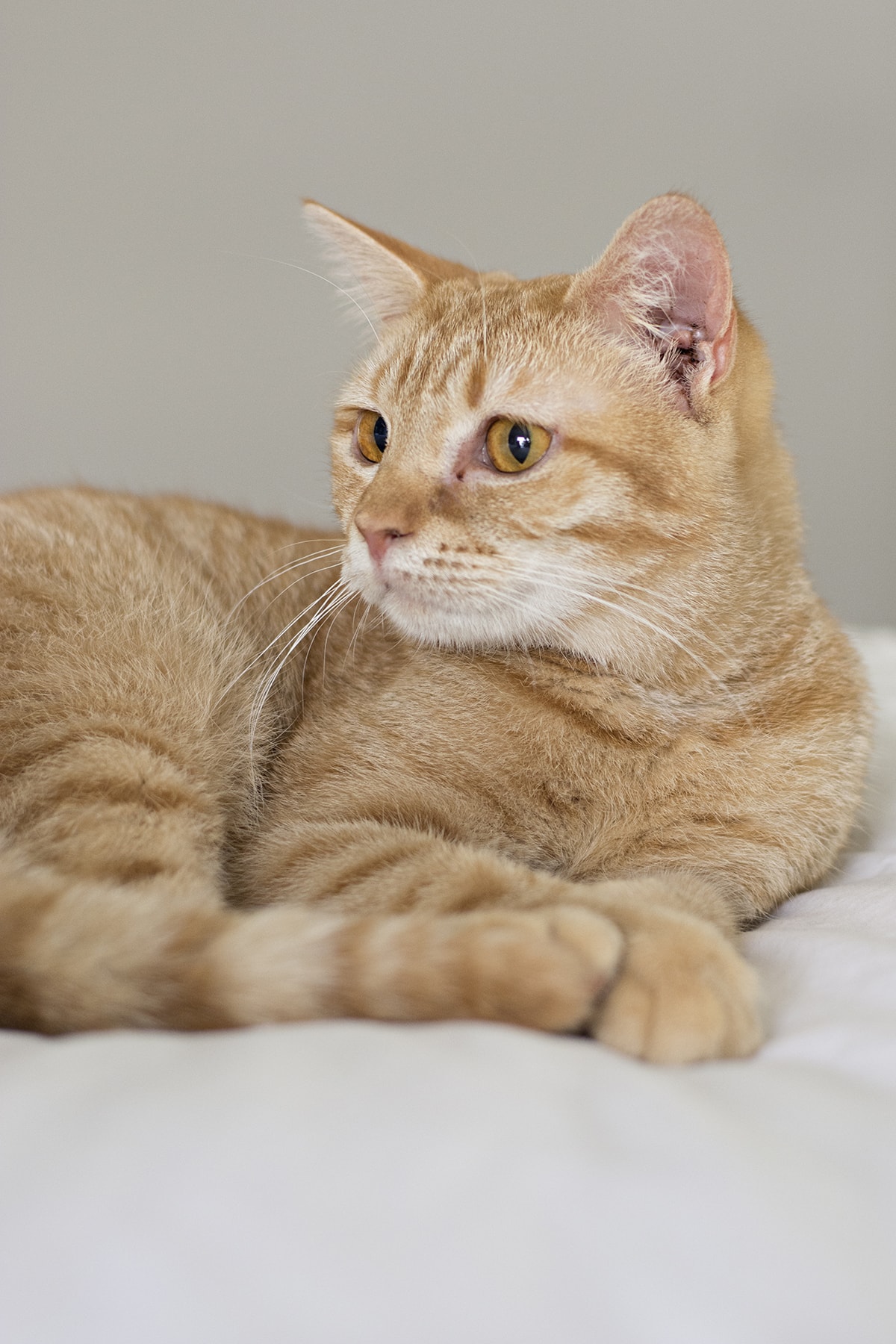 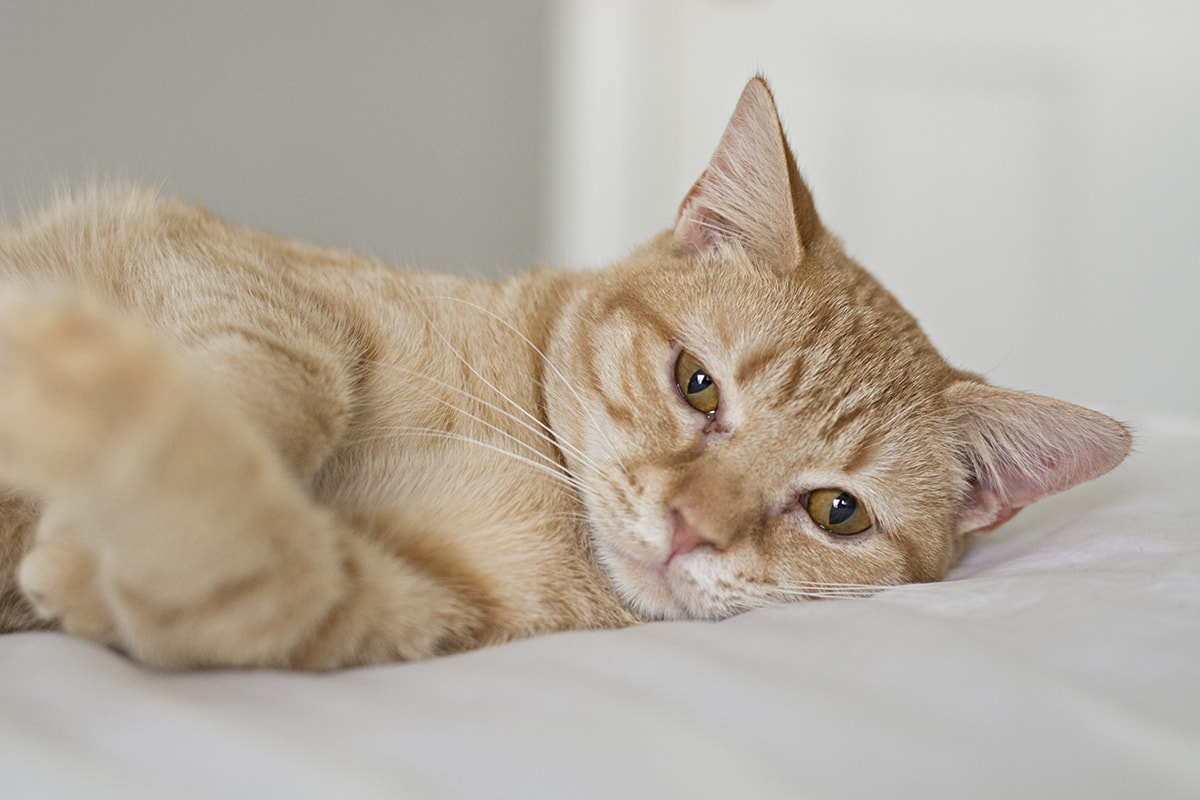 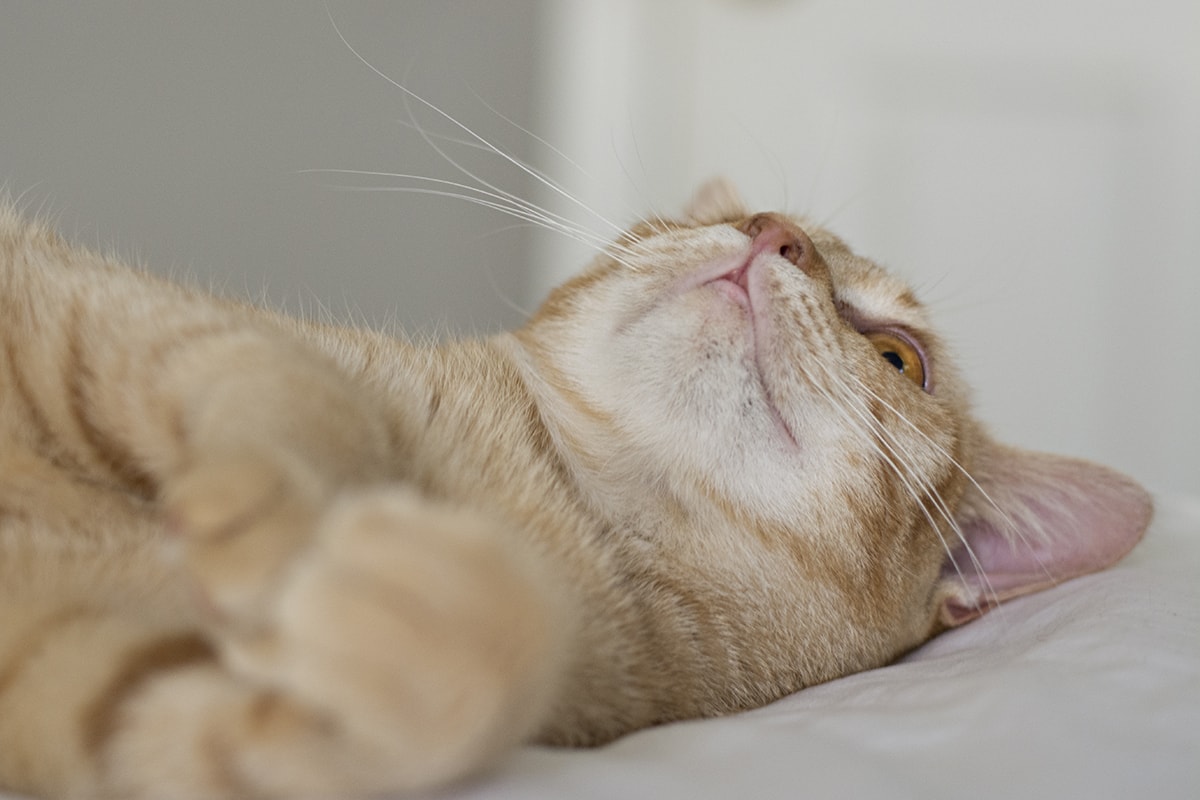 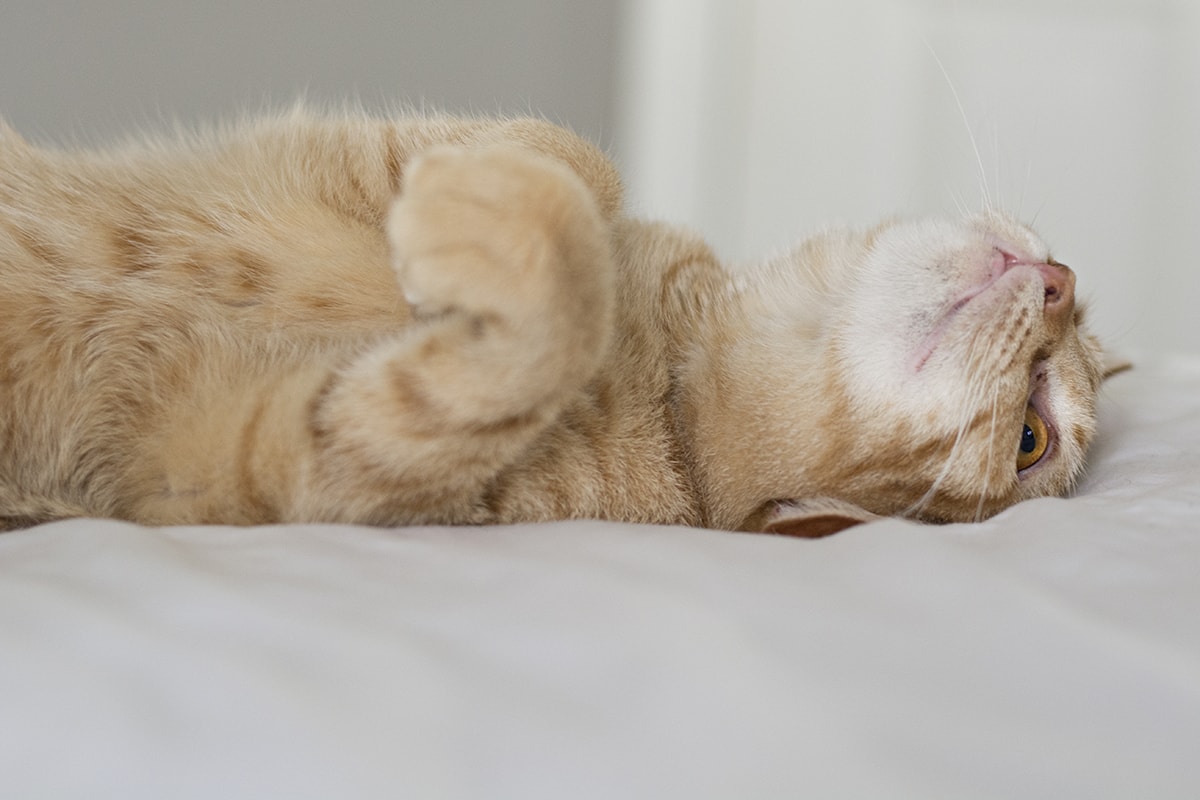 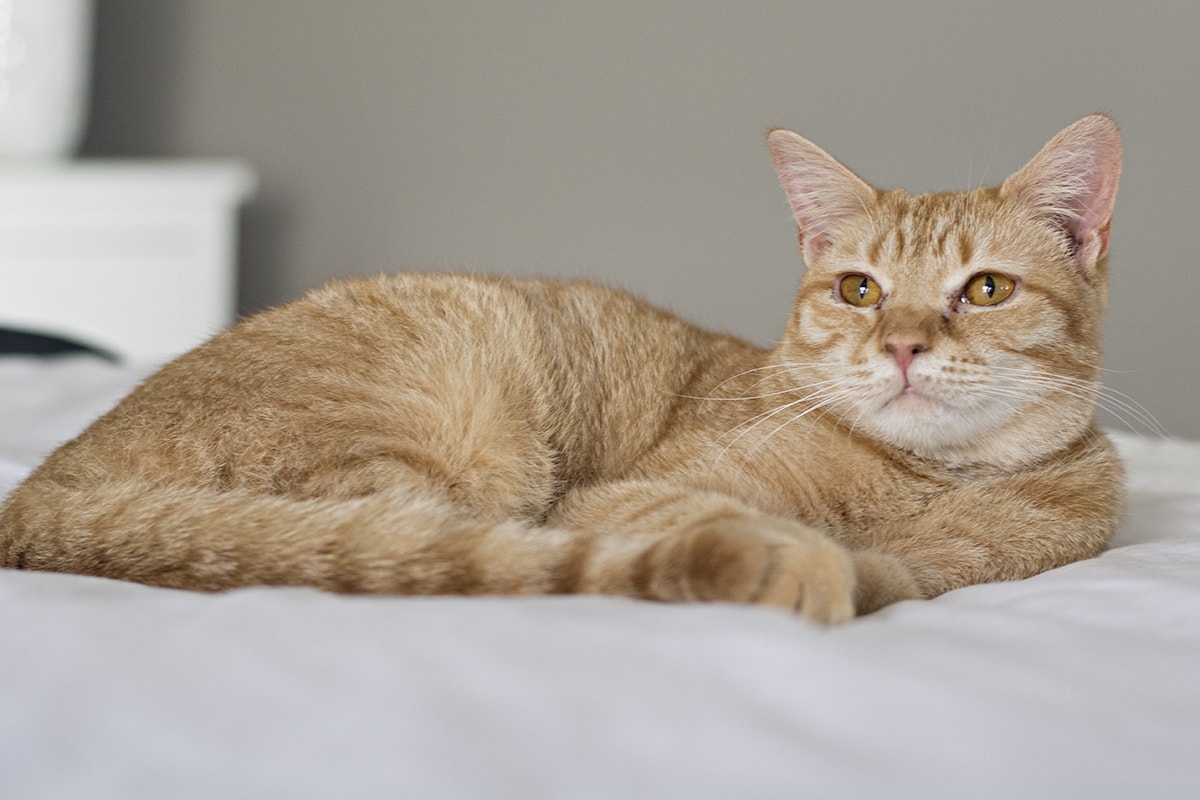 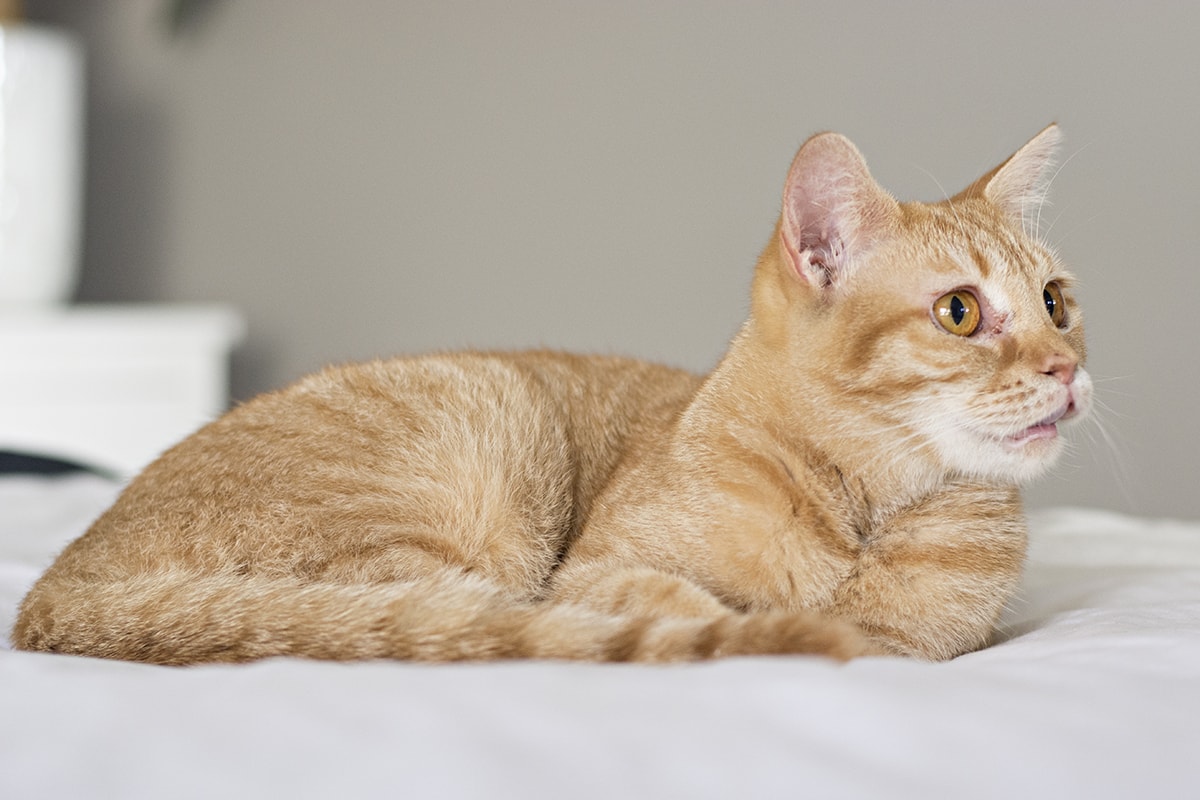 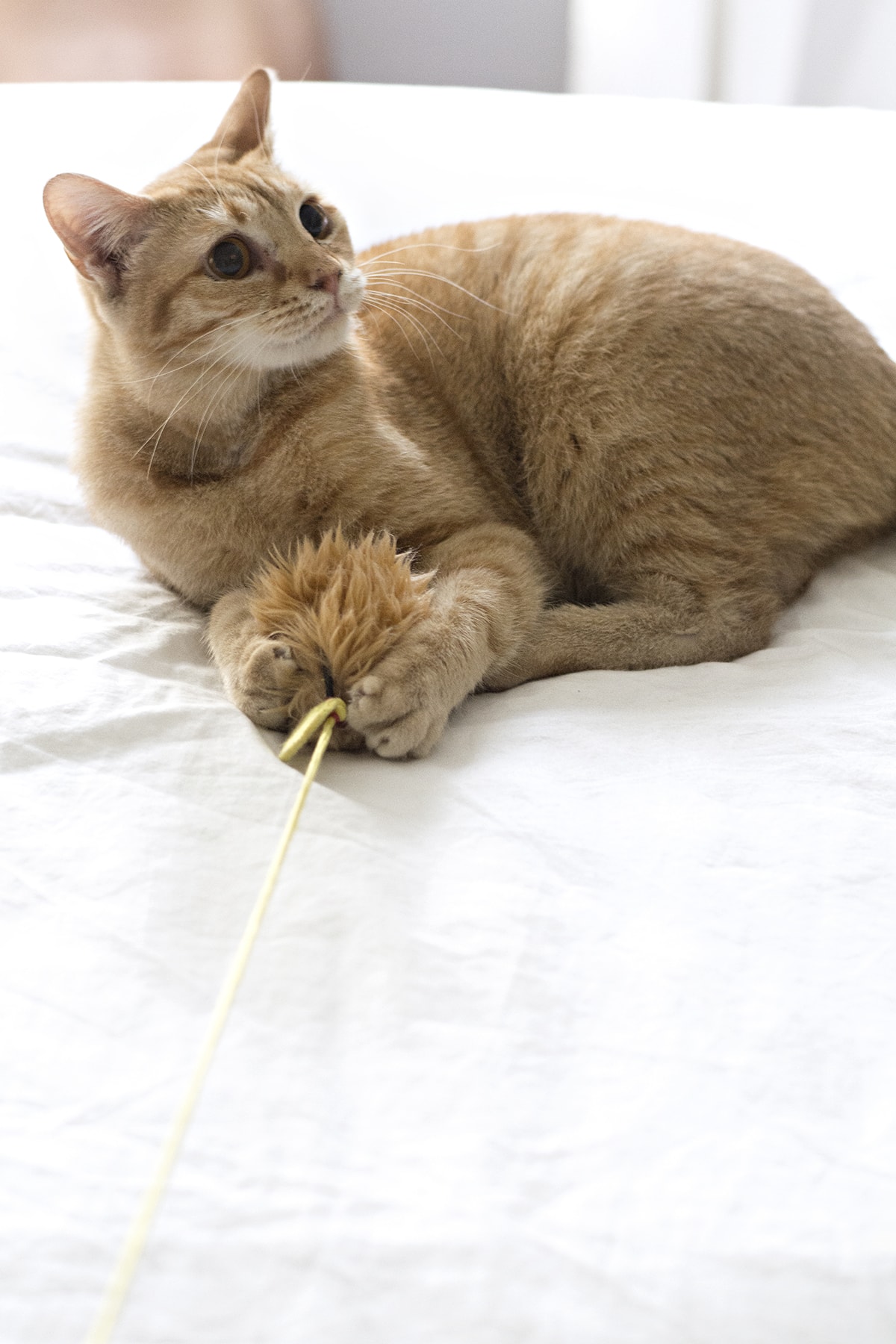 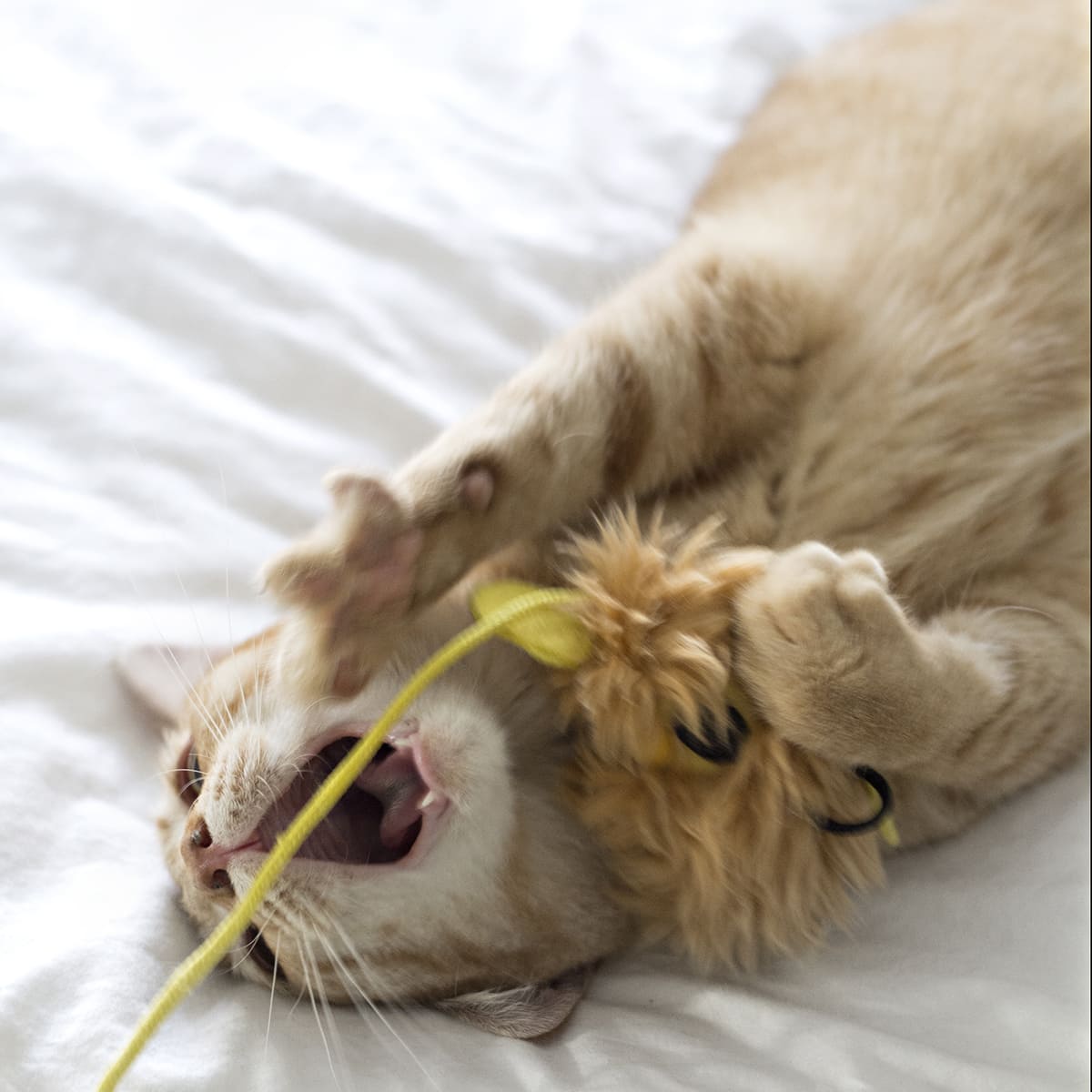 I think my other two girls will be fine since we are introducing her so slowly and keeping her separate for so long. It’s the same way we introduced Monkey to them and it worked out well.

My daughter had said that it was the saddest thing having to leave all the other friendly cats behind in that room and I agree with her. My husband has a couple he can’t stop thinking about as well.