Hi friends! I know I usually don’t post on Thursdays but yesterdays post (click HERE) would have just been way too long, so I decided to split it into two. 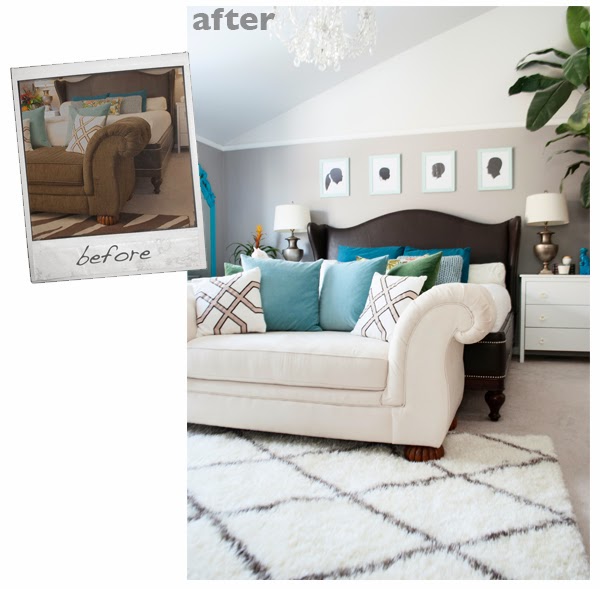 I would not call this a tutorial since most upholstery pieces are slightly different in some way and I learned along the way.

I had many mishaps during this project.

One of my most nosy cats got stuck in the frame while exploring and she was really panicking too. It took me a while to get her out: 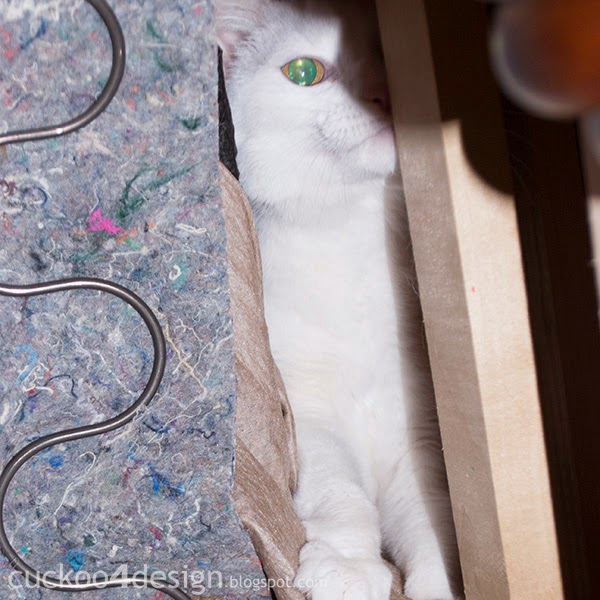 And my knuckles looked like this after removing all the staples with the upholstery pliers:

I was glad to have my little sketch to show me what to do when it was time to put it back together. And it is my biggest advice to anyone who wants to attempt to upholster anything: PAY ATTENTION TO THE DISASSEMBLY PROCESS. 🙂 Ok?

And I’m trying to share some of the details of what I actually did.

I had to learn several things along the way and I’m glad my blog friends were there to share their experiences with me. My first issue was trying to find a sewing machine foot to sew the piping. I’m glad I listened to my friends who told me that a zipper foot would work too and it sure did:

Another one was finding sturdy upholstery buttons. The ones you can find at the craft and fabric store are made out of plastic and I didn’t want that. I know I was going to have to put a lot of pressure on them and was afraid that plastic couldn’t handle it. So I asked around and my friend Jennifer from “Dimples & Tangles” told me to just have them made at a local upholstery shop since they have the large metal button presses.
I was lucky to find a local upholstery shop in town. I could have stuck around there for days to acquire some knowledge from the nice owner who does some amazing work.
He made me the buttons:

And after attempting to sew my seating cushion and realizing that my sewing machine couldn’t handle the multiple layers I decided to have him make that for me as well.
And I’m so glad I did. The buttons and seat cushion were the only thing I didn’t make myself and I’m really glad. At $85 for the cushion and buttons I’m really happy.
This is a way for anyone to make an upholstery project doable and affordable. Have you ever gotten an estimate for an upholstery job? It’s so expensive! But after doing this myself I have to say the price is so justified. It’s so much work!
I also had to rebuild one of the arms since it had collapsed and the wood had to be repaired and attached again:

When it was time to start with the upholstering, I started with the arms. One of the arms had to be redone because I accidentally poked a hole into the fabric. Yikes, can you hear me use bad language?! I wasn’t happy at all.

I worked my way from the center out with the tufts:

And I used pliers to pull the button strings tight.

I used two types of staple guns for the job. One electrical one and one hand held one because it was easier to get into tight spaces with.
The diamond shape of the tufting falls into place pretty naturally. When the arms were done, I went over the tufting again and actually used fabric glue to seal the pleats. The original diamond upholstery of this chaise had been sewn but I wasn’t going to attempt that and I learned that fabric glue is my new best friend. 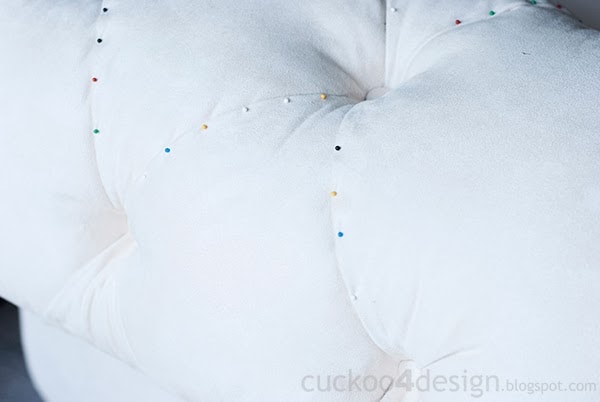 I held the seams in place with needles while the glue was drying. You have to be so careful not to make a mess with the glue.
Then I moved on to the sides.

I could barely hold the stapler with my tiny hands. I wear ring size 4.5! Yup they are small!

Then it was time to attach the front of the chaise:

Some of the staples didn’t go in so nicely. Can you tell?
But after this last step the chaise was all done.

I don’t like how I wasn’t able to match the seams on the front the same way it had been before but I did the best I could.
I’m really happy with the microsuede from OnlineFabricStore too. It was great to work with and is beautiful.
I would still love to replace the feet with some brass furniture wheels like you can see on some Chesterfield sofas. Wouldn’t that look cool? But I don’t want to spend around $100 for them 😉

Click HERE to see more bedroom photos in yesterday’s post.
If you expected a full blown tutorial, then I’m sorry but it was hard trying to concentrate on what I was doing an trying to come up with a tutorial.
There are some more small changes to come in our bedroom so stay tuned.
Talk to you tomorrow.

I am a participant in several affiliate programs which includes the Amazon Services LLC Associates Program, an affiliate advertising program designed to provide a means for me to earn fees by linking to Amazon.com and affiliated sites. To read more about this please check out my full disclosure statement HERE.
897Shares