It’s been a tough week in our house and with a very very heavy heart I have to tell you that we had to say our final goodbyes to our Monkey yesterday. She went down hill fast, looked like a skeleton and was barely able to walk. My husband’s cousin who is our vet came over to put her to sleep. She went peacefully without ever having to fear a car ride and vet appointment. 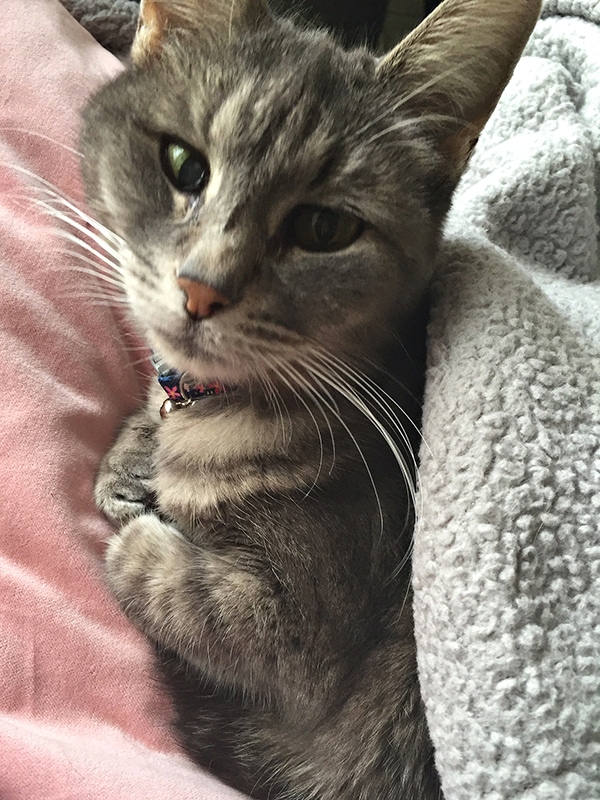 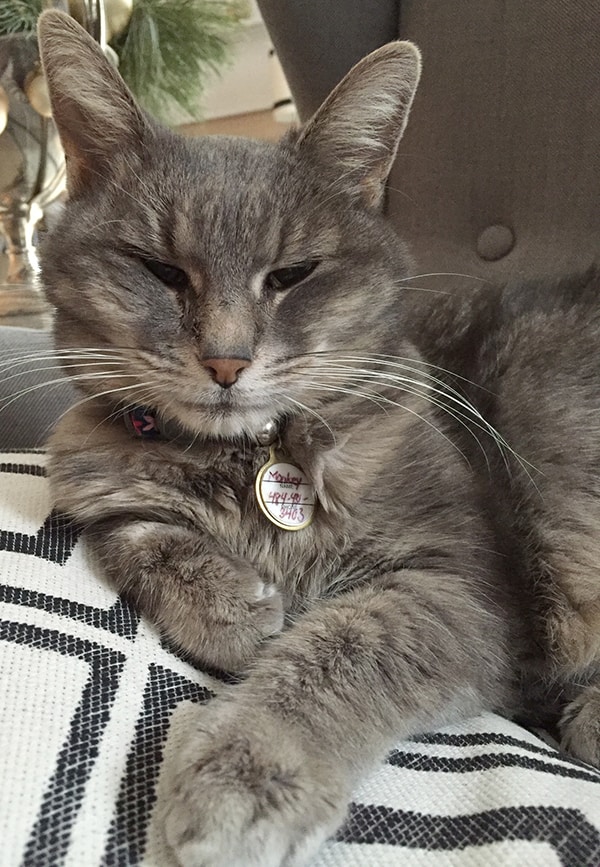 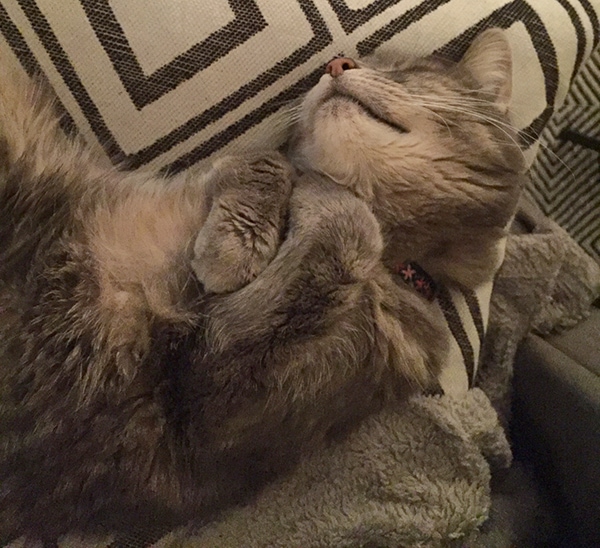 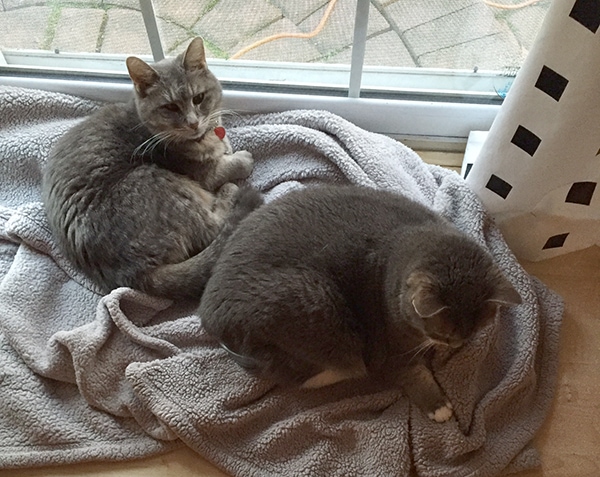 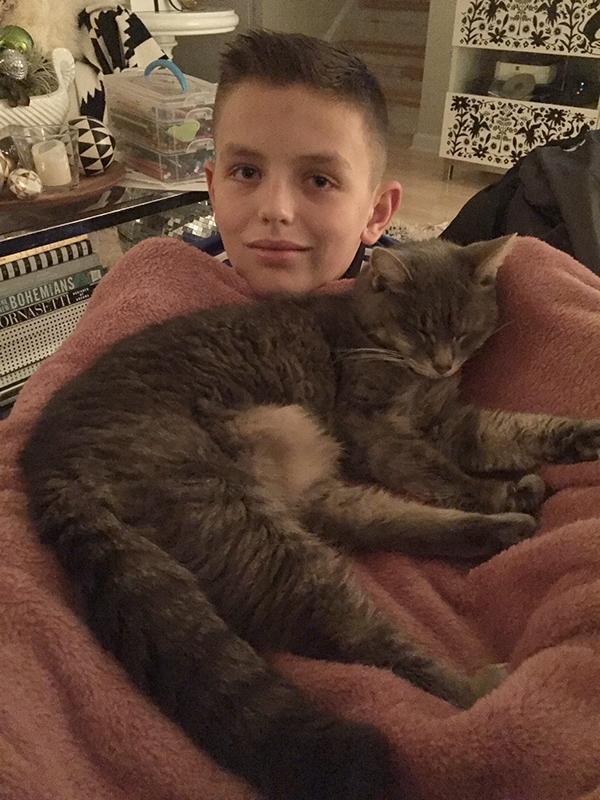 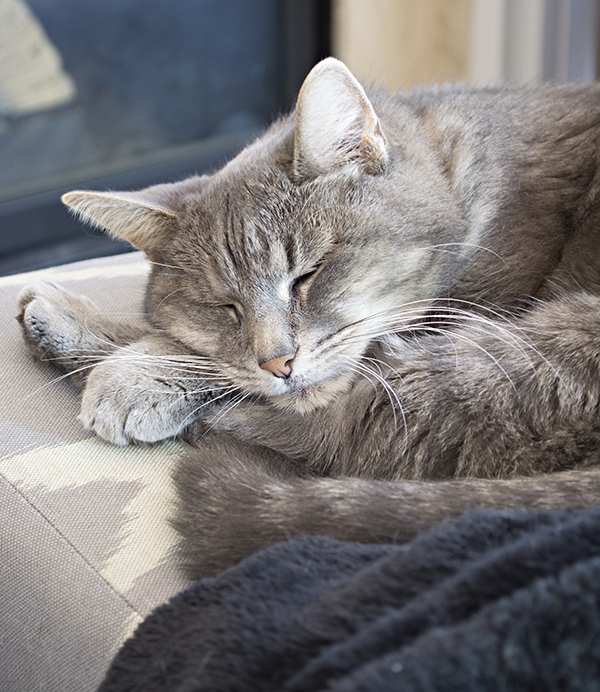 Sorry for some of the bad cellphone photos but I just snapped the last week of her.

It was very hard for me to write this post and it is certainly written with lots of tears running down my face but I just want to write down how I want to remember her. 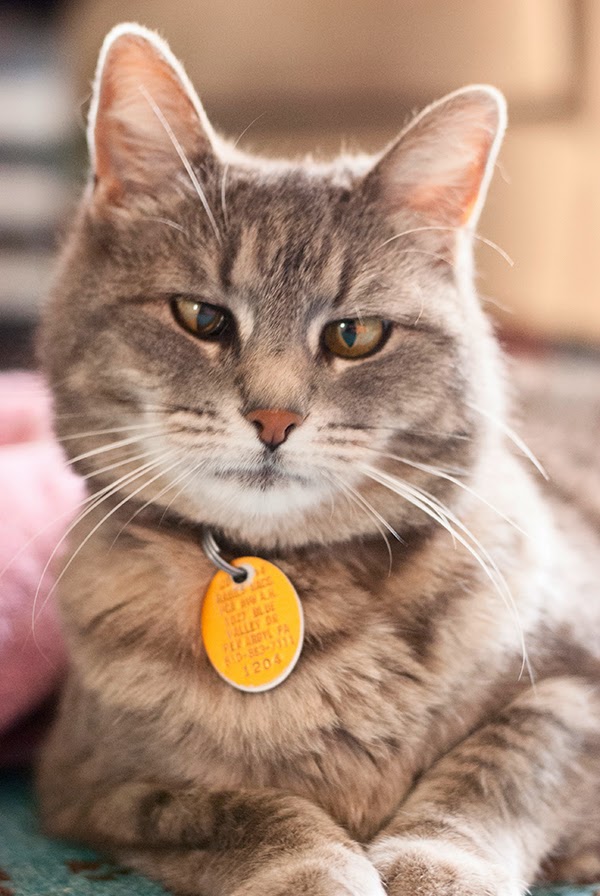 It had been such a long road to get her to trust me and then my family. When she showed up in our neighborhood years ago, I wasn’t even able to look at her through the window because the minute she saw my face behind the glass she would run. I started to put out food for her and the other stray cats during the first cold winter and I sometimes saw her sleeping on a neighbor’s front porch chair or drinking from our bird bath.
She was terrified for about 3.5 years but things changed when our male cat Harry died of a long battle with kidney disease. I feel like she sensed that the territorial male was gone. When he died she started sticking around the yard more and more. Hid in the bushes and meowed for food. I talked to her more from a distance and I started to be sure that she was around at all times. Then I had to leave for our annual 5 week trip to Germany and started being afraid that something would happen to her but my neighbor’s kept reassuring that she stayed around and sure enough when I came back, she was still hanging around the bushes.

I sat outside with her in the evenings and she kept coming up to the porch. After a while she would finally jump up on the bench next to me and then she let me start petting her. Those little gestures of trust just melted my heart and I knew that I just couldn’t turn away from her anymore. We’ve had strays before in our yard and I’ve found homes for them but this was just different. It was the long drawn out process of trust and friendship that I just couldn’t discard by trying to catch her and give her to someone else. At that point I didn’t even know if she was a boy or a girl yet and when I started to call her Monkey. She sounded like a monkey when she meowed. It was the funniest sound ever.

Then a horrible winter rolled in and the temperatures dropped with lots of snowstorms. That’s when I bought her a heated pad and built her a styrofoam igloo (click HERE) on our bench since my husband refused to accept another fourth cat and I refused to just ignore her. And yes we fought about it plenty of times.

But when the temperatures started being well below -10 (Do you remember the polar vortex of 2013/14?), I went against my husband and brought her into our spare bathroom at night. I actually spent some nights sleeping in the bathtub with her on top of me. I was afraid of letting her get closed to our cats in case she was sick. When she started hating being in the bathroom and scratching at the doors at night I ended up taking her to the vet (click HERE) where I found out that she was a little girl around 4-5 years old that had been spayed and was blind in her one eye due to an old injury.
I finally let her out into our house and the other three girls just accepted her. There wasn’t one cat fight which sealed the deal for me once and for all that she was mine.
My husband still wasn’t on board and actually completely ignored her and was mad at me but I ignored him.

She finally won him over when I went to Germany again and she would be his garden buddy every day. He likes to work in the garden and she would follow him around. He was scared that something would happen to her while I was gone and that I would blame him so he eventually started talking to her and taking care of her. 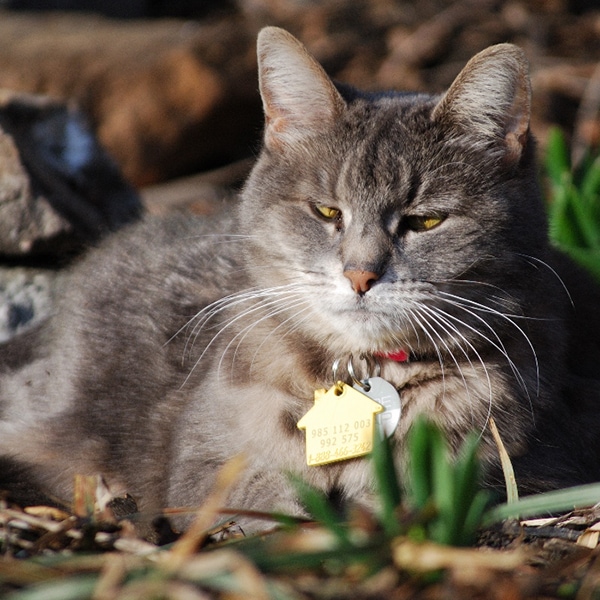 Her healthy garden days and you can see how full her face was.

Now he admitted to the fact that he will miss her too since the other cats don’t go outside of their enclosure (click HERE to read more about it) and he won’t have a garden buddy anymore.
She loved lying under our huge lilac bush in the summer and that is where we will put her ashes. It was her favorite spot.

After facing the possibility that she probably got into something toxic outside that caused her kidneys to fail, I’m sure that I never want a cat again that goes outside the way she did. Remember I built her the cat door (click HERE) that scanned her microchip so no other animals could come and go.

If you read my post on Friday (click HERE) then you know that I ordered a custom plate of Monkey and I can’t wait to get it. Rachel gave me a sneak peek and I just adore it. Smiling and laughing is the best way to remember someone and this plate will do just that. 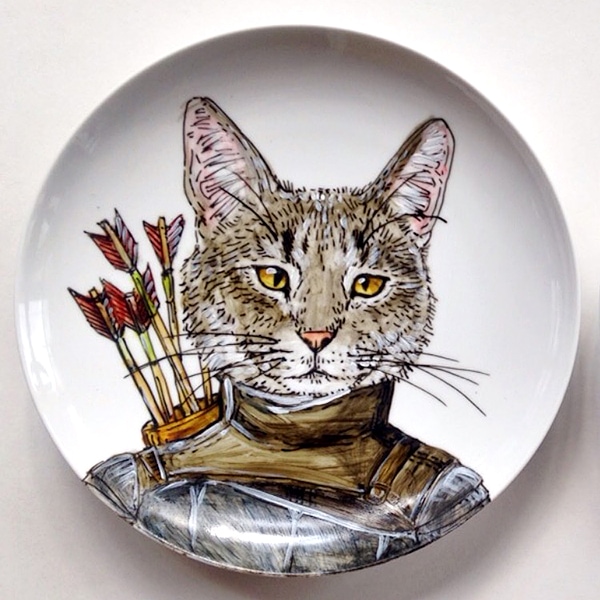 She certainly was a little hunter like Katniss Everdeen who snuck out at night to hunt. And she brought me lots of disgusting dead presents. And I’m so thankful that she crossed my path and gave me the gift of her love and trust. Other humans had failed her and she decided to trust me again and accept us as her family.

I’m kind of drained and not really enthusiastic about blogging right now. I’m hoping to post once or twice yet before the year is over and start a little break which will hopefully get me in the mood again to tackle all the unfinished projects around the house.

Have a good weekend my friends.