I have dreaded this post for a very long time but I knew it was near and unfortunately the time has come today. So if you don’t like cats or pets (but I know that a lot of you are here because you do) then this post isn’t for you.

We had to say goodbye to our beloved little Harry. This post is just to remember him and celebrate his life. So this weeks posts might not be for everyone.

I remember going to PetSmart with my son when he was 2 years old for some cat food but it was adoption day. There were cages and cages stacked on top of each other and all the way on the top was Harry sitting regally in his cage like a king.  I don’t know what it was, I just fell in love with him. At that point we already had three cats (girls) and we certainly didn’t need another one but I just couldn’t let it go. After sticking around and calling my hubby, I decided to adopt him. They told me he was 8 years old and the oldest cat up for adoption that day. The ladies cried when they put him in a cardboard box (horrible cat carrier). They asked me to take good care of him because he was a very special guy. He cried all the way home in his box. I kept him in the spare bedroom for 2 days so the girls and he could get to know and sniff each other under the door.

When I finally let him out the first thing he did is this: 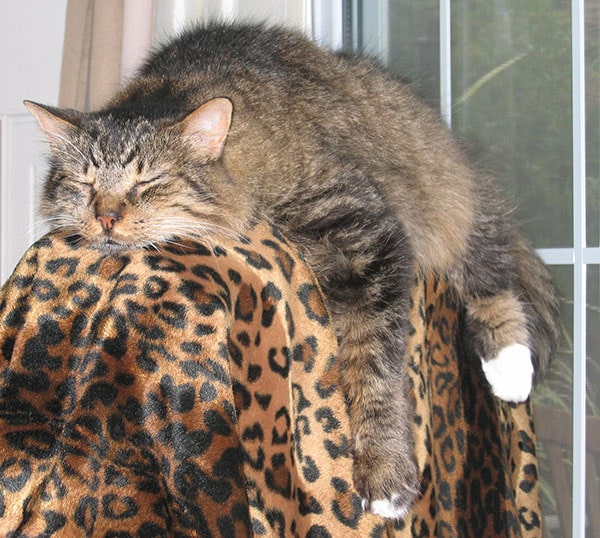 And it is one of my favorite pictures of him. He looks so comfortable and content.

A few days later the vet informed me that he had a horrible heart murmur and that is where our journey with his health started. I took him to a cardiologist at a clinic and he had been on meds for his  cardiomyopathy until the end. He took his pills like a champ. His papers at the adoption said nothing about his health, they only stated that he was kept in the basement. Poor little fella. I still think people gave him up because of his health problems. He had about 15 bladder infections, a blocked urinary tract, numerous teeth removals and a couple of other issues. He was by far the worst financial decision we ever made, but we loved him. 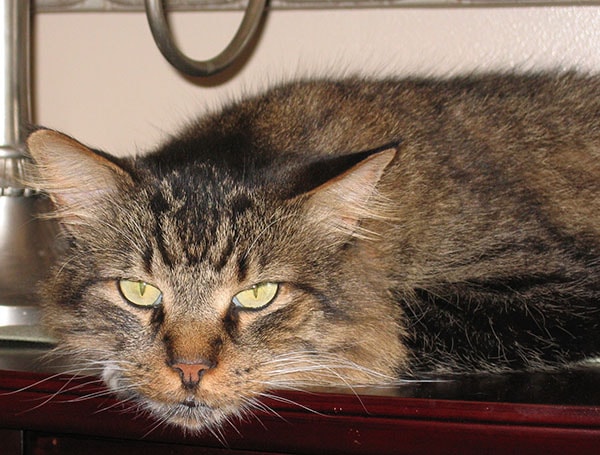 Like the ladies said at adoption day he was a special character. He was no scaredy cat. He didn’t run away from anybody like our other cats do, not even the vacuum cleaner would make him move from his spot. He had to be everywhere and was very social. He loved it when we had friends over and we sat at our bar in the basement. He’d sit on his own barstool or he’d love to watch the guys play darts. He went crazy over the darts. He’d talk to people. He’d follow me everywhere and sleep with me. He was territorial and a bully but in his own charming way. (If he’d been a human man, he’d probably been a partying macho man with a bad boy persona. Sporting his tattoos and charming the ladies while bullying every other man in his sight. That’s probably why he liked hanging out on a bar stool in the bar.) And yes I called him a douche bag on occasion (which is my favorite name calling word).
He’d go and sit on the kids homework or toys and wouldn’t move. The kids would come running to me because they were scared to move him. They knew if they would, he’d hiss. All my other cats would run and hide the minute they’d see or hear the kids but not him. I’d have to go and pick him up, so the kids could take their things. He would steal food and oh, did he love food. His favorite were shrimp!
He hated wind! Every time when he was outside in their “lion’s den” and there would be strong winds, he’d come running inside like the devil. He also loved catnip, which we’d bake in bushels in the oven. The whole house would smell and they’d have a party.
He loved lying under the Christmas tree.
He hated men, LOL, and yes I can laugh about him peeing on my brother’s dirty laundry when he visited from Germany. But that’s definitely where I called him a douche bag.
And when we were out, he’d wait for us by the door, no exceptions. 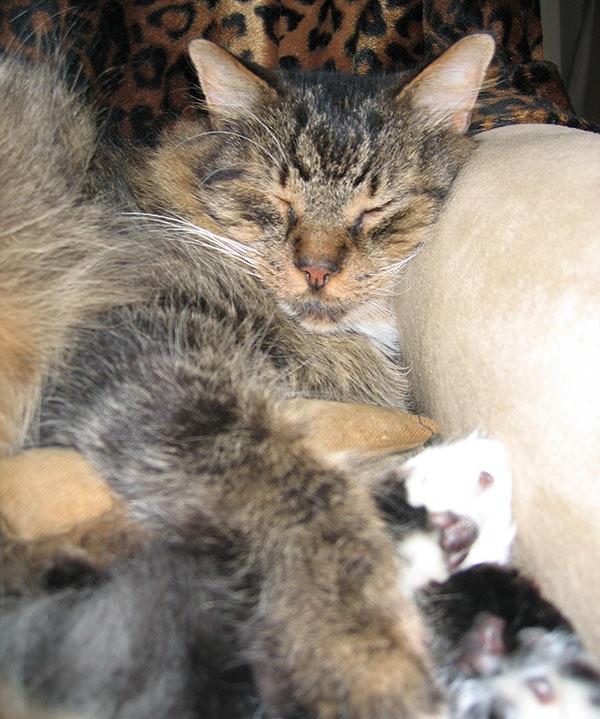 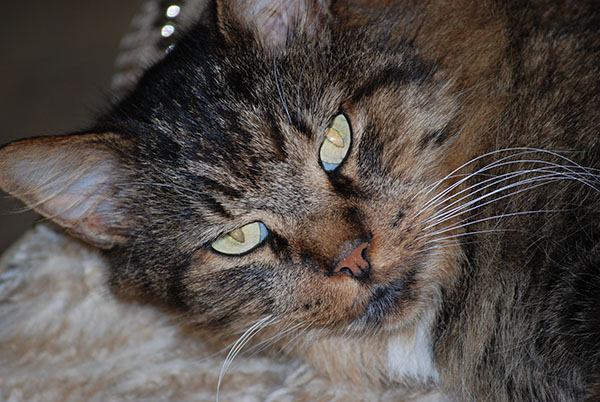 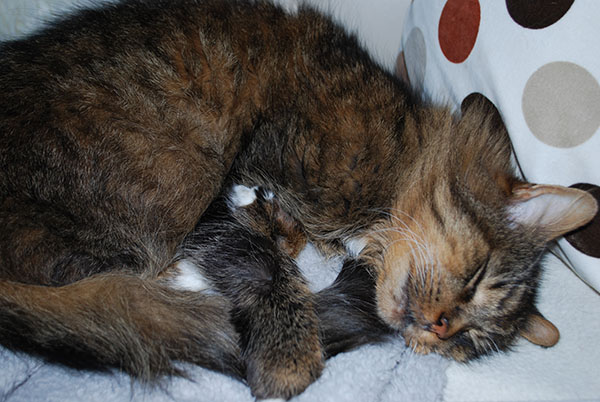 Like you can see he also loved the grass and catnip in the lion’s den (if you’ve never seen the enclosure then click HERE): 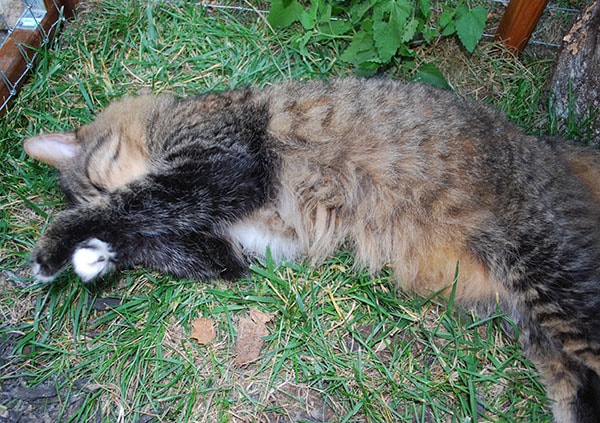 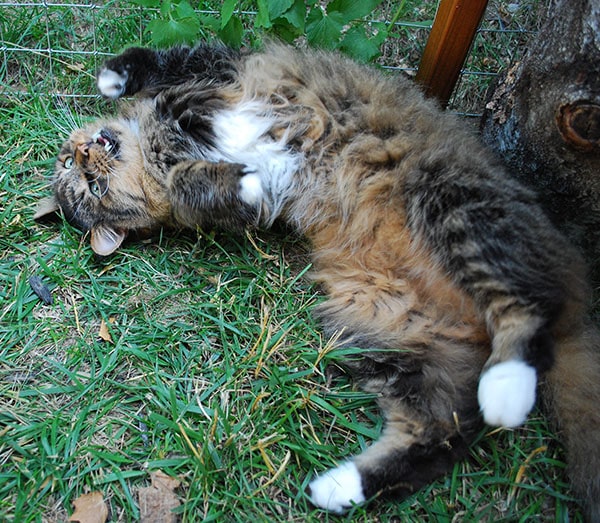 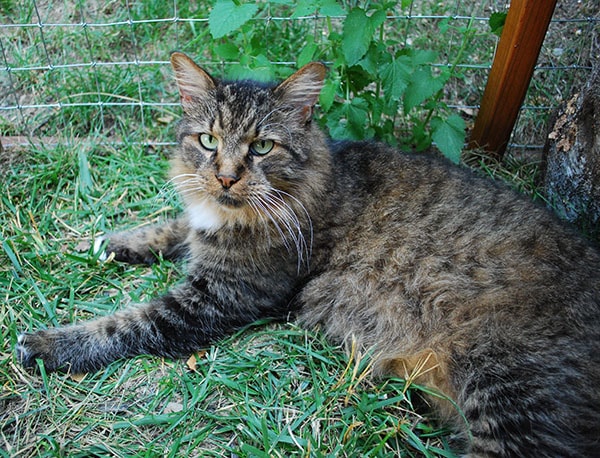 He lived with us for 8 years and was diagnosed with kidney failure last year before we left for Germany and it went down hill from there.   {click HERE to read my pet mess cleaning tips}

The last couple of days of his life I made him his shrimp, tuna, chicken and cheese. I sat with him as much as I could on the couch and scratched his chin. We even took him out into our fenced in back yard which freaked him out a little. 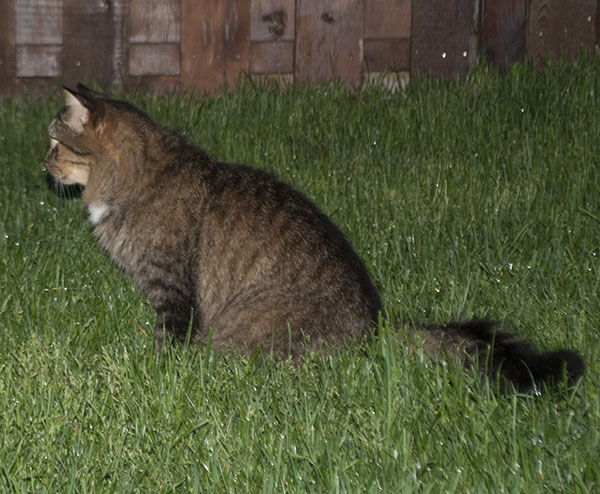 We are so lucky to have a vet (thank you Liz) in the family who came to our house. He didn’t have to endure a scary ride to the vet. He went peacefully without ever even sensing anything or being scared and now he is resting at my mother-in-law’s pet cemetery. 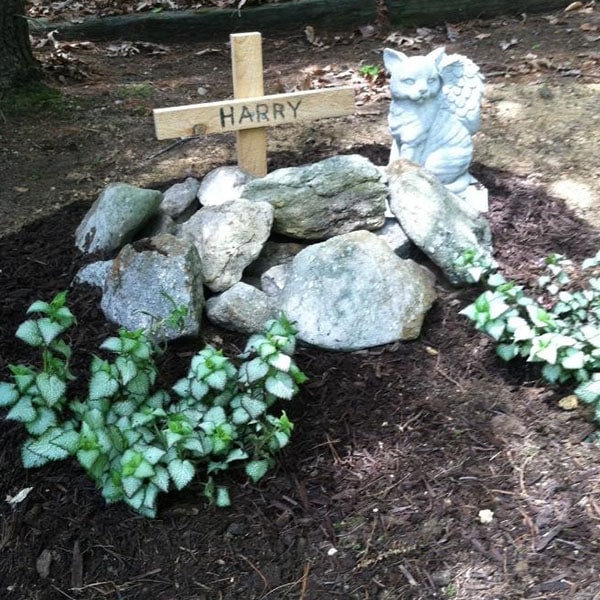 One of the hardest things was seeing how difficult it was for my 10 year old son. Who cried for 2 days straight. He is a very kindhearted boy. He was never a toddler/child who would pull their fur and tails or mistreat them in any way. Kindness comes natural to him and he is having a hard time dealing with the first loss of a pet.
My 6 year old daughter is having an easier time since she said that he isn’t really gone. “Mom, he is sitting in heaven and now all we need is a mailbox to his cloud so we can send him messages.” Love her way of thinking 😉

I know that it will take me a long time to not expect him to sit by the door waiting for me, to bug me for a sip of water from the sink when I’m in the bathroom and to not sit next to me on my sofa while I’m blogging. Right now my Lucy filled that space next to me and I love them all just as much.

We will forever remember him for the great cat and spirit he was and I hope that we gave him the best life he could have had.

I promise I’ll be back to my DIYing self next week. I’m kind of sick of looking like this in the morning from crying too much. Yup that’s my eye, lovely, right? On top it I got a rash from rubbing it too much. 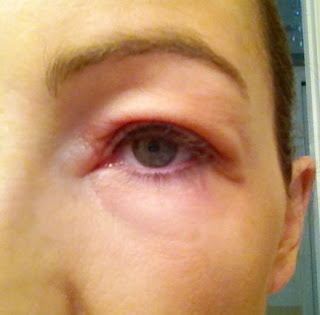 And why the heck is it that when I look like this that I run into people that I haven’t seen in 10 years (that so happened)? And then I feel the need to tell them that I haven’t been drinking for days and that my husband is NOT hitting me? LOL, I’m getting my humor back.

So on Friday I want to write a post about how we dealt with his sickness. I have become a specialist at cleaning up pet messes and dealing with cat behavior issues because it sure was messy at times. I call it our dark secret in the basement. And I hope that I can maybe help someone who is dealing with the same issues as we were.

So if you are interested, then stop back, ok?
And I’m sorry if I haven’t been my usual blog-visiting and commenting self but it’s been a rough week.