This weather is throwing me for a loop this week. Kids are home from school, delays and just a lot of unexpected schedule changes. I’m like a child and function the best on a regular schedule, who is with me?

That said I have made some progress in my daughter’s room (click HERE to see the plans). I took a quick trip to Ikea last week and was able to get some things on our list, like a new shade to replace her broken one, some frames and a picture ledge. But I do have to go again because I need another picture ledge and some more storage containers for her craft items.
We really purged a lot in her room. She opted for just storying some of her dolls and stuffed animals away instead of getting rid of them. I did the same as a child and am now glad I kept certain pricier items. Are you someone who trows everything out when not really needed anymore or do you tend to keep some things. It can be a double edged sword because at times I really do feel like a hoarder.

My daughter has discovered learning how to be more organized and told me last night that she loves organization. It’s in complete contrast to some of her other chaotic storage solutions but I do love that she is interested. She is actually so into it that she ordered a label maker and some storage containers for her slime collection on Amazon with her own piggy bank money. And she told me that she will dream at night of making labels and keeping it all clean. It makes me smile with contentment. She also wants a rolling craft cart for her slime making.
I certainly love how involved she is with the process and that she loves it as much as I do.

I also discovered that she is just as much in love with throw pillows as I am and I had to tell her that she already has enough on her bed. I mean 8 decorative pillows on your bed are enough right?

Then I ordered her soccer quote and a different lama print (this one HERE) at Staples. I was in a rush and picked it up yesterday but didn’t check the bag at the store which I really should have. I was fuming when I opened it at home. I ordered engineering prints of the quote for $1.69 which is a great price but for the lama print I wanted something a little bit better and ordered a presentation graphic for $14.99. I discovered thought that they are all printed on the same flimsy paper and look pretty much the same. Now I have to go back and complain and tell them I want my money back. They also enlarged the quote on the engineering print and now it doesn’t fit inside the frame. Seriously folks!!!

We managed to hang the new hanging macrame hammock chair and she is totally obsessed with it and so is every other child coming to our house. It really is a pretty chair. I originally wanted to write a tutorial about how to hang a hanging chair but while I was doing it I got a little scared that it would possibly fail for some people and I would get blamed. The biggest thing is finding the studs in the ceiling with a stud finder and then anchoring the mounting hardware to that stud with long heavy duty screws or bolts but it is something I really don’t want to take responsibility for in someone else’s home. 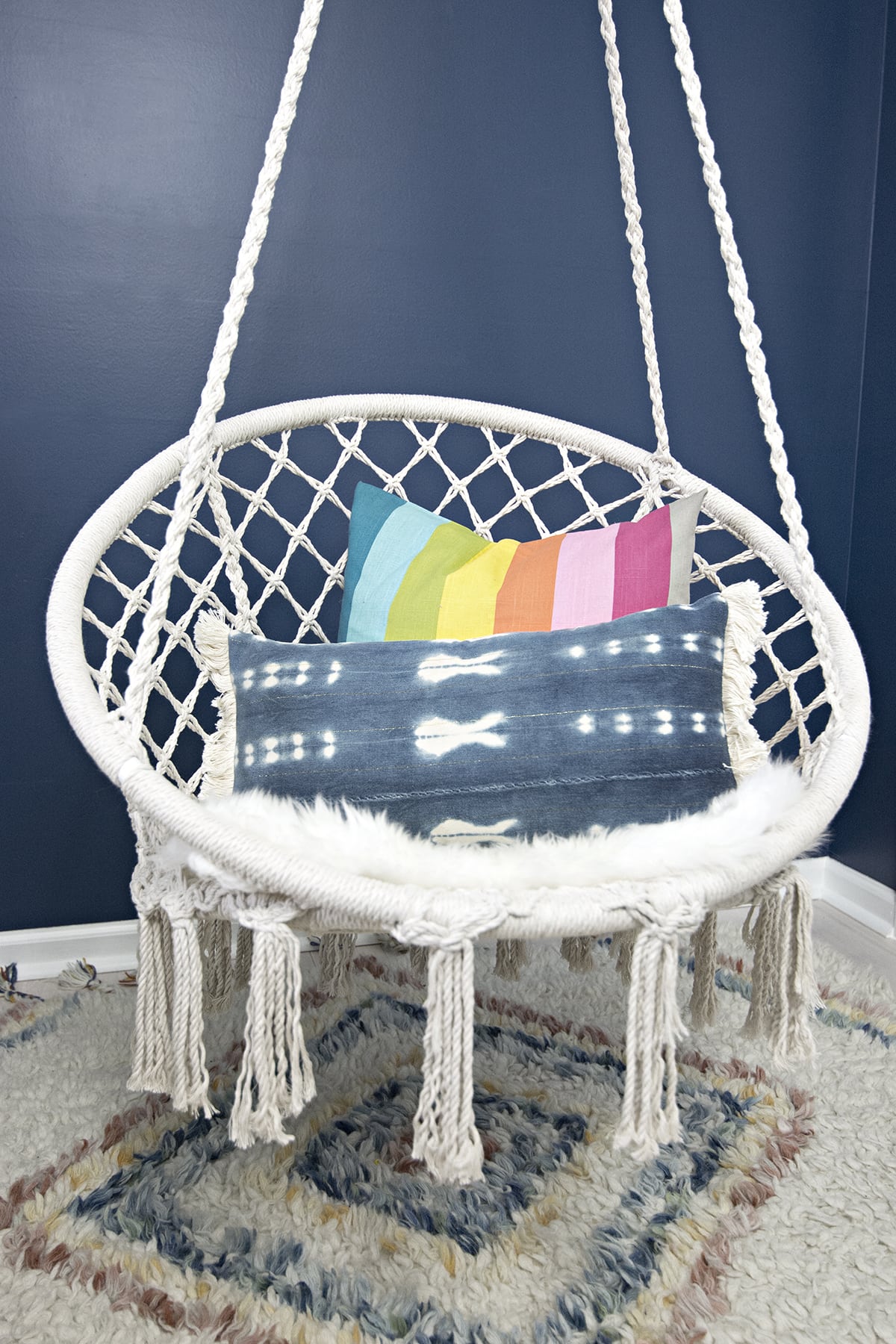 It was hard to take photos in her room and the lighting is glaring off the walls which makes them look shiny and lighter than they are. 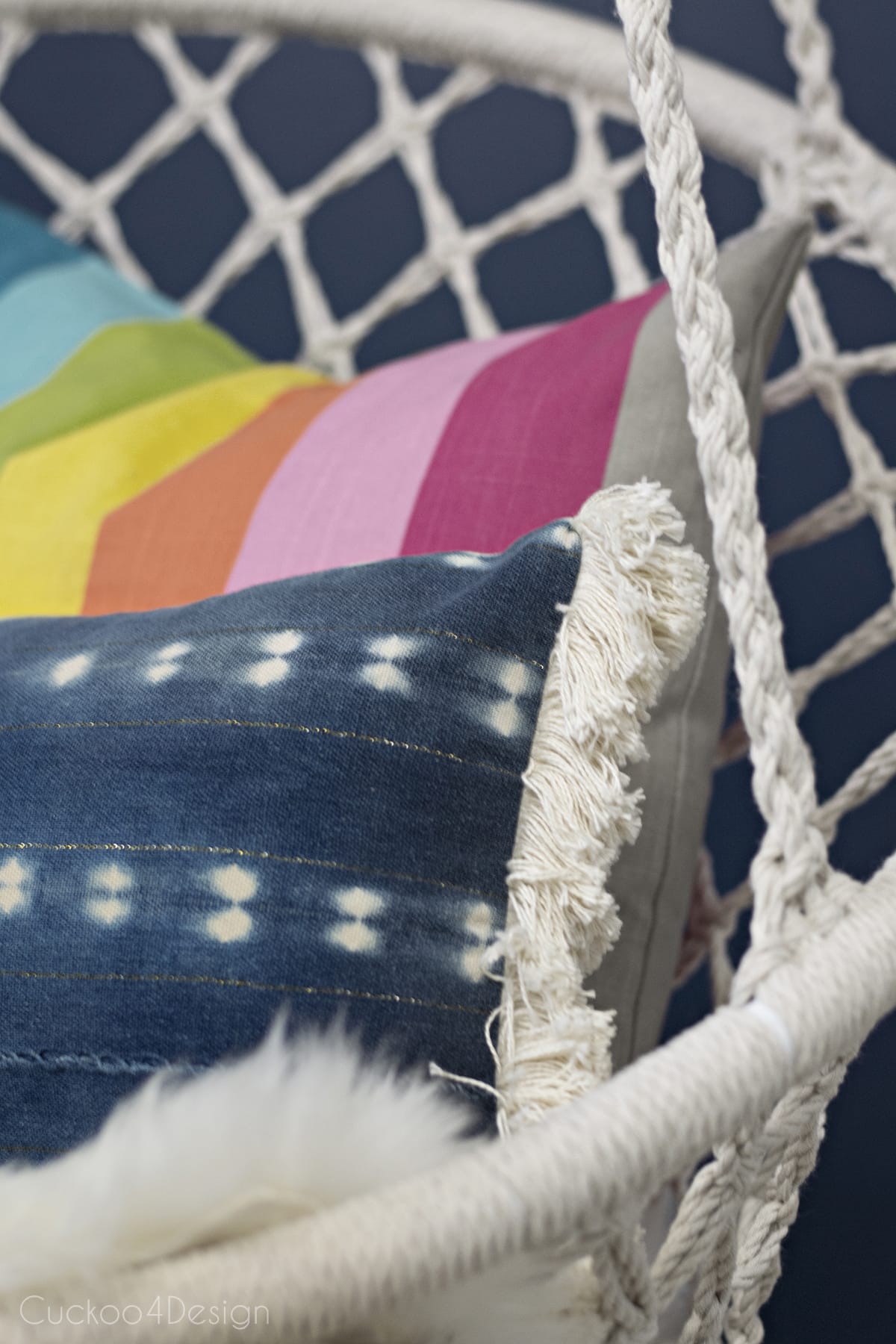 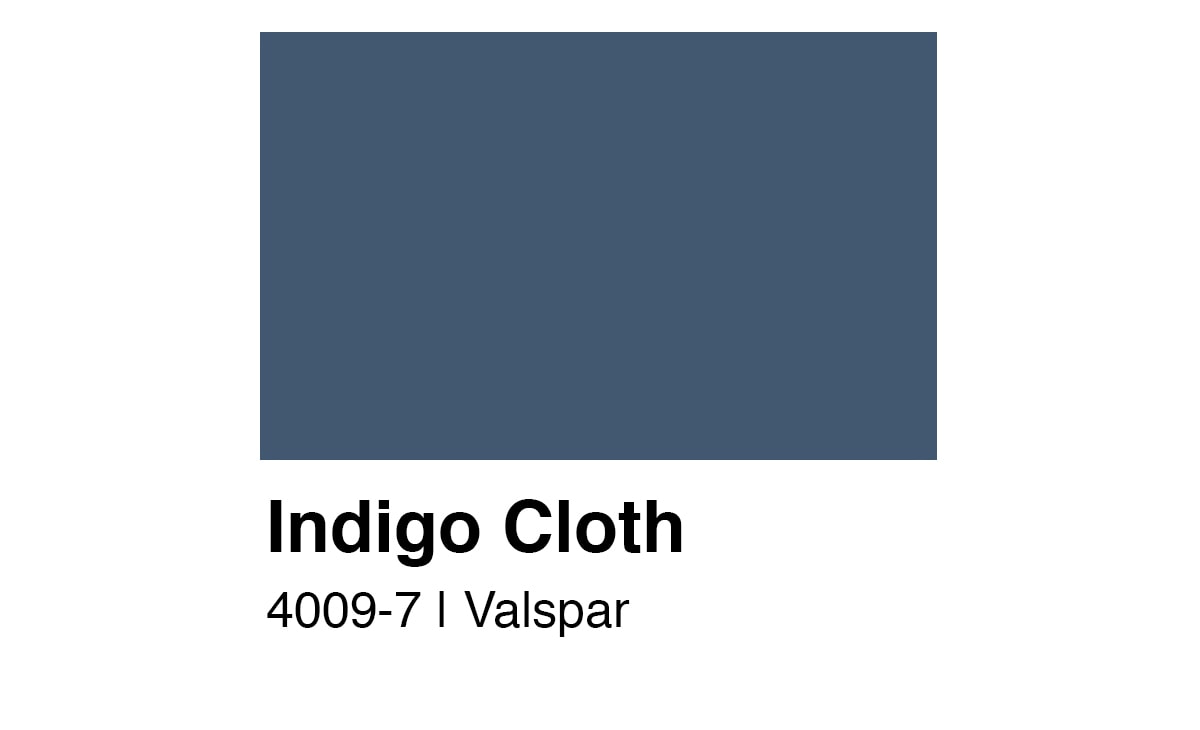 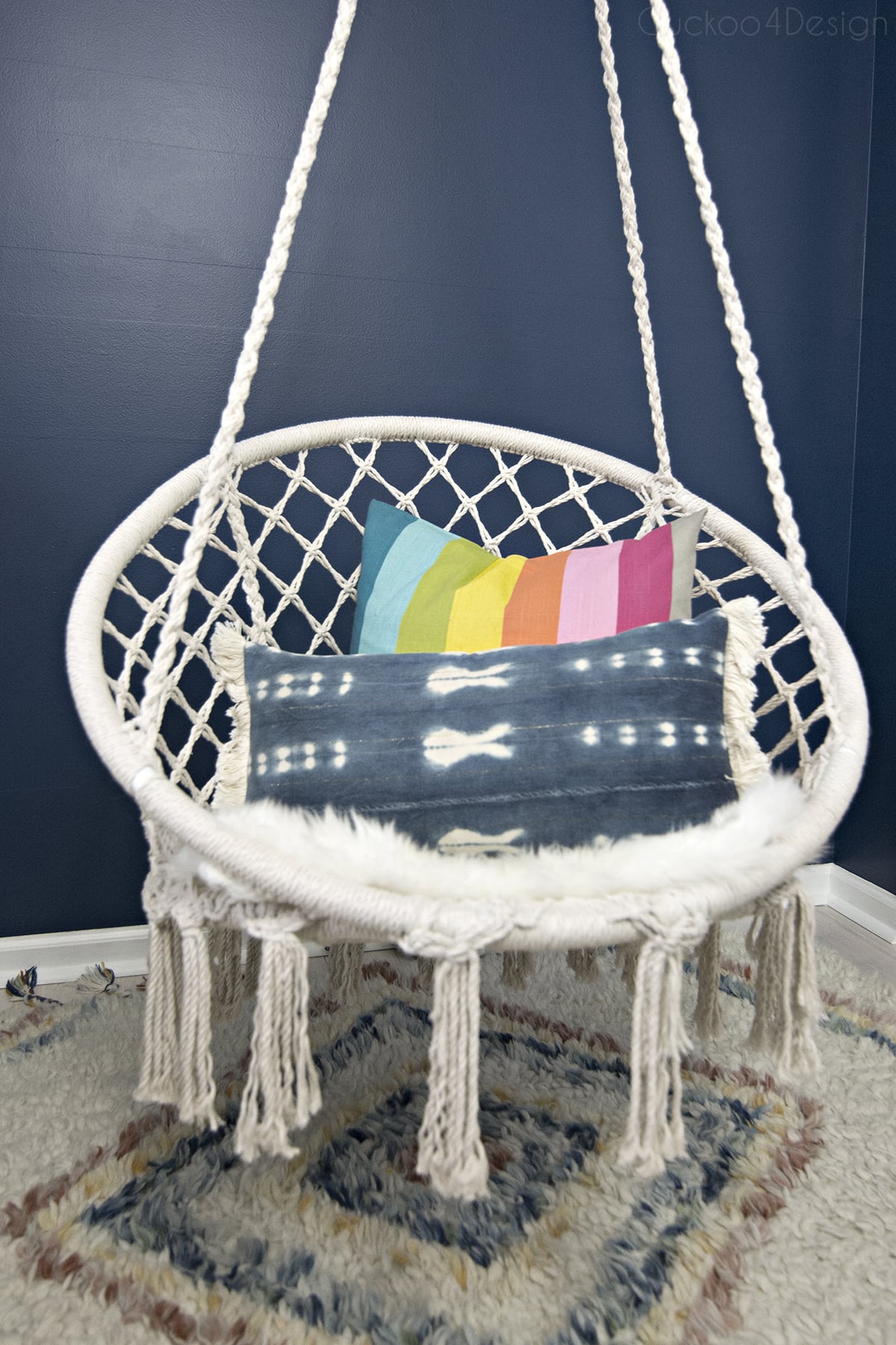 I got an Etsy gift card for Christmas and bought two mudcloth  fringe pillows which I originally wanted for the chaise in our living room. But since that was returned, they have for now found a new home in my daughter’s room and the blue looks so good with her walls. I bought them from this shop HERE. 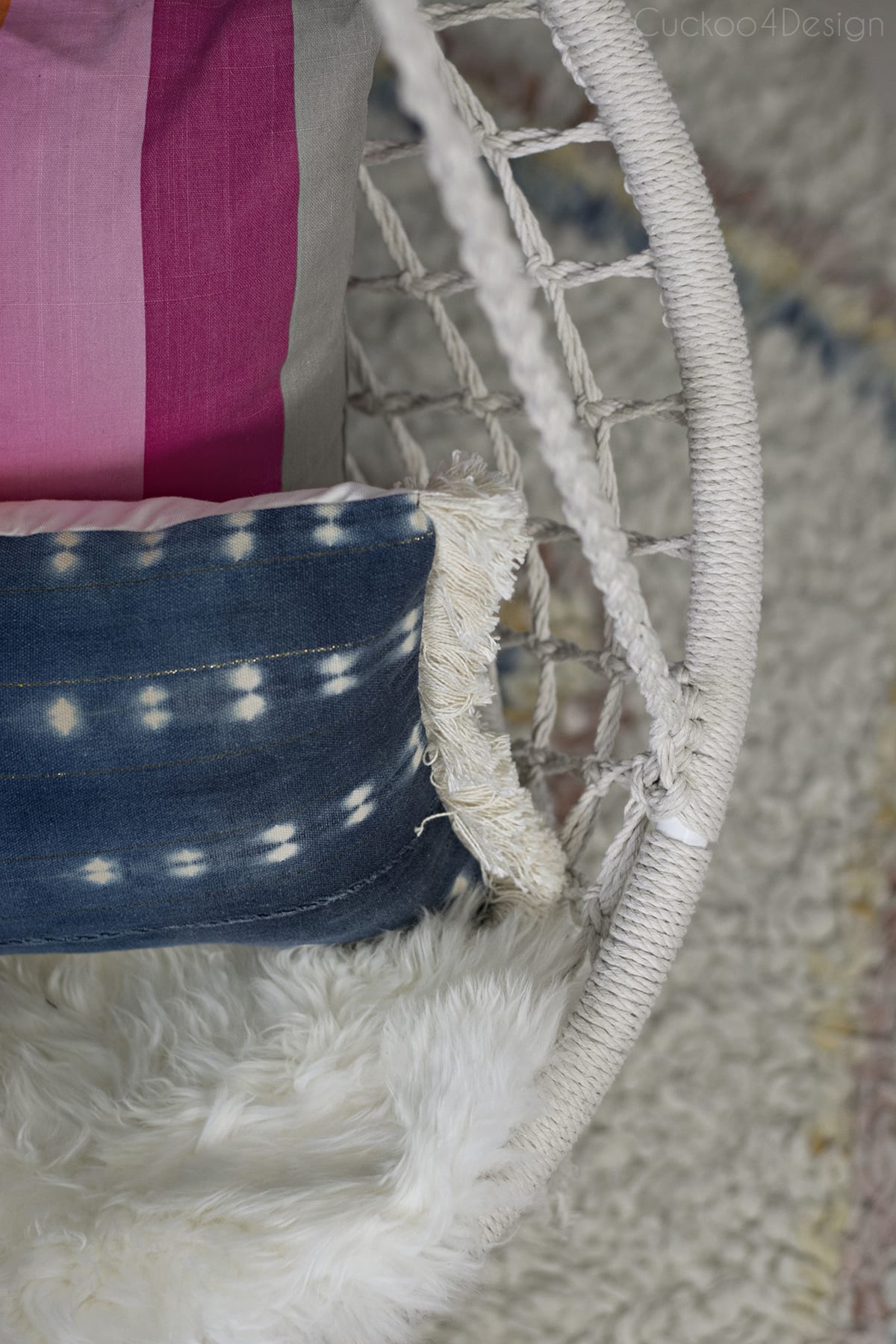 I purchased this hardware HERE and am now contemplating getting a spring hook (HERE) for it yet too. If you get the same chair as we did, you do have to go and buy a chain for it at the hardware store. I actually had one left from a big chandelier so I didn’t have to. We also had to buy another snap hook (HERE). This set HERE might be a good choice as well because it includes the chain. 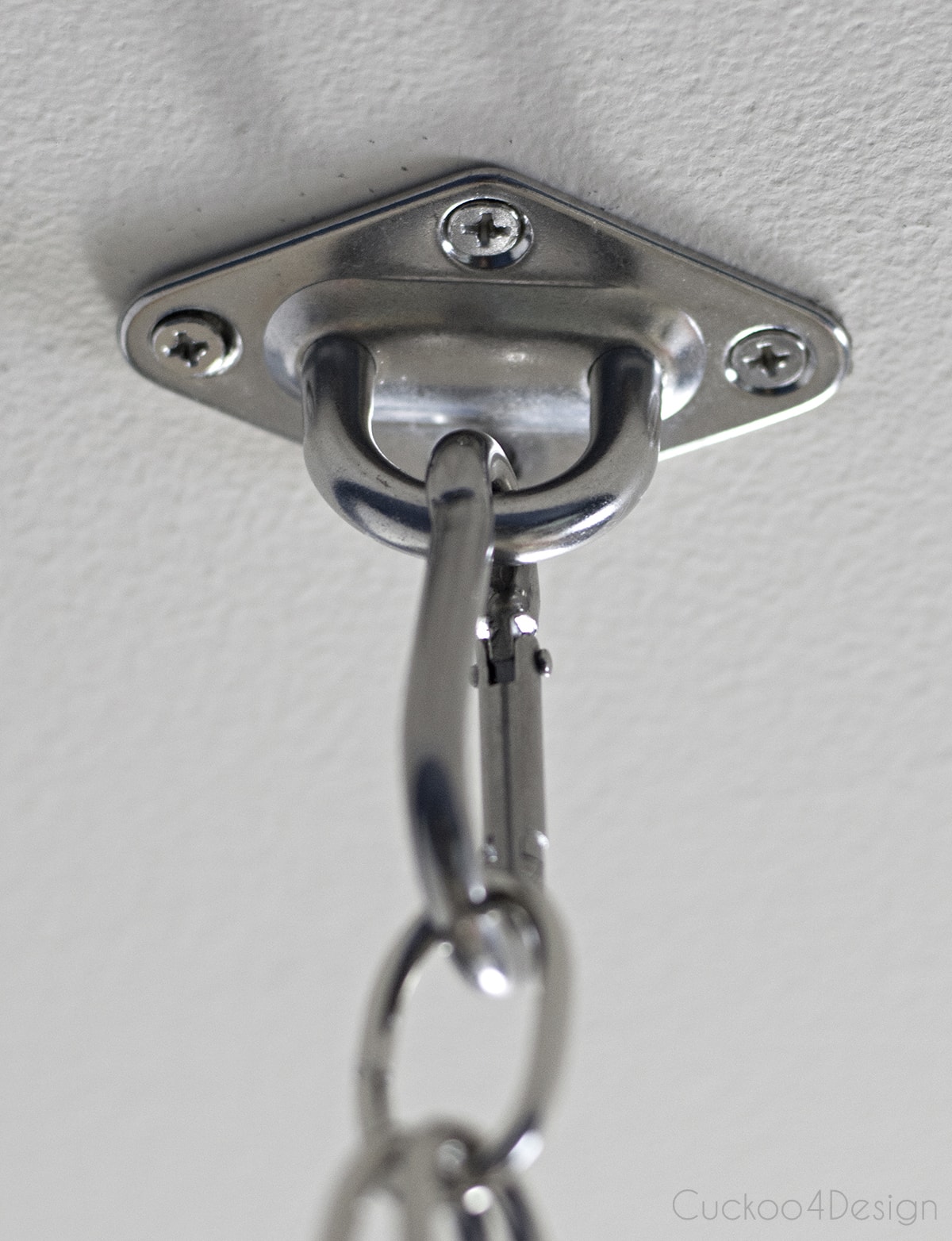 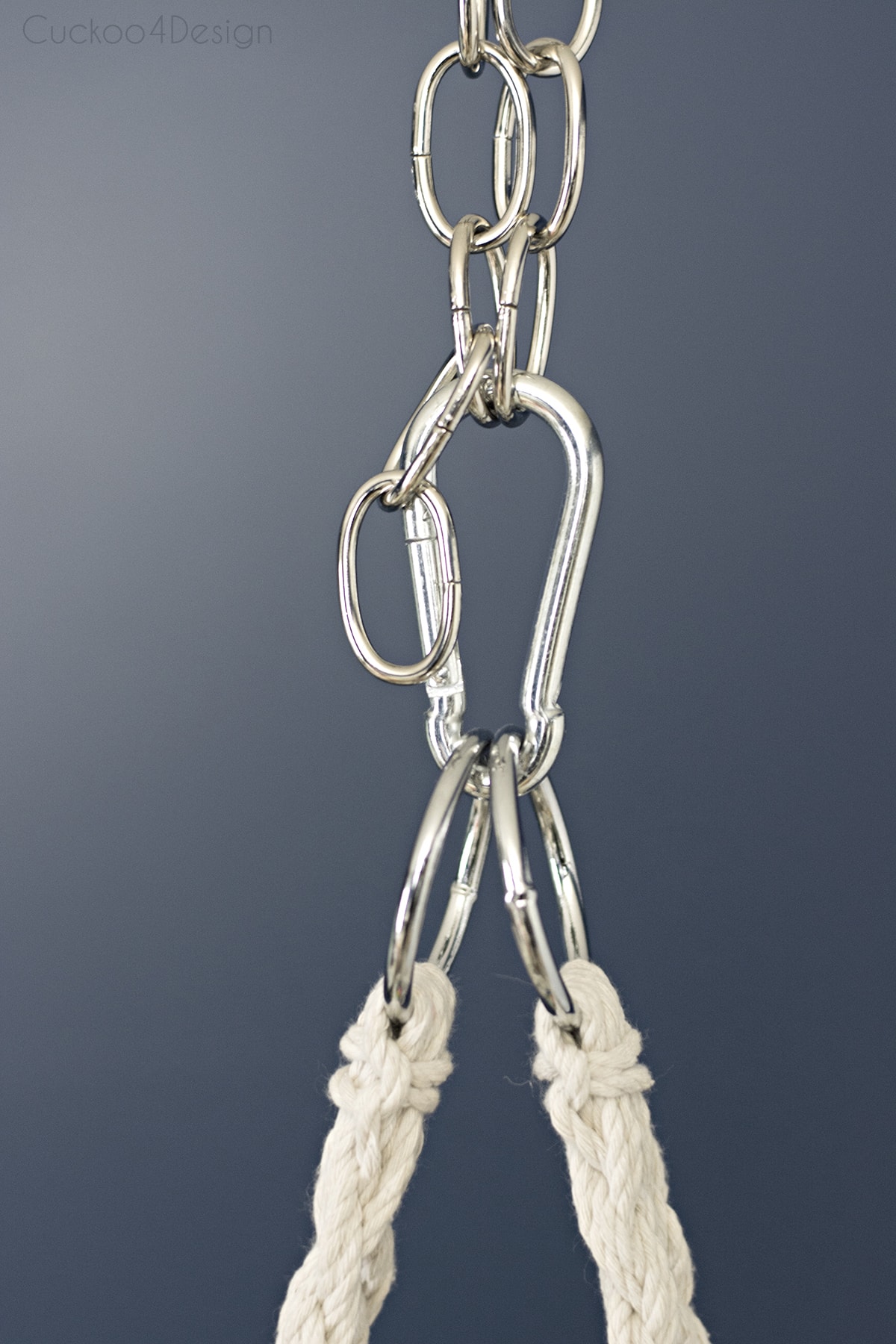 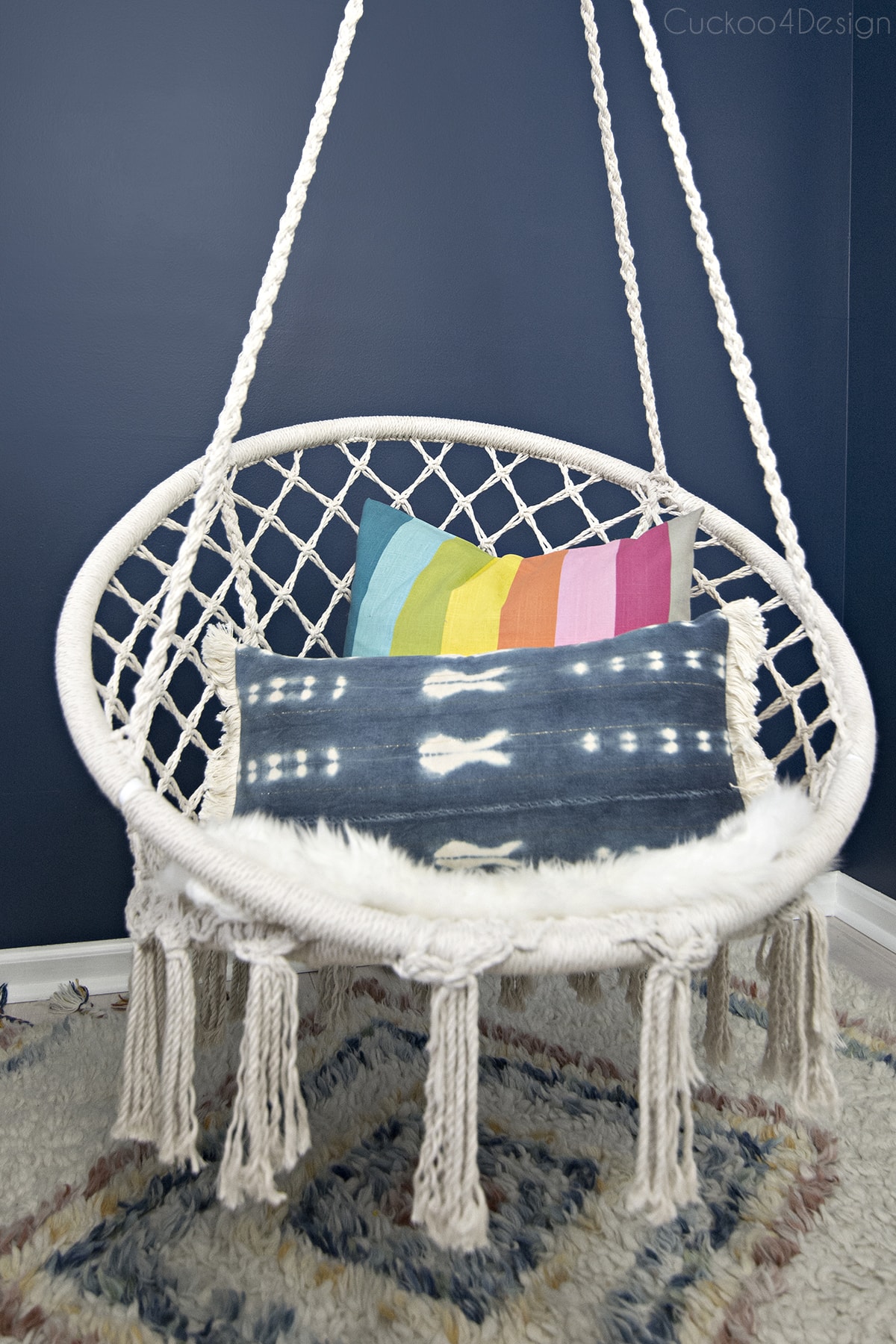 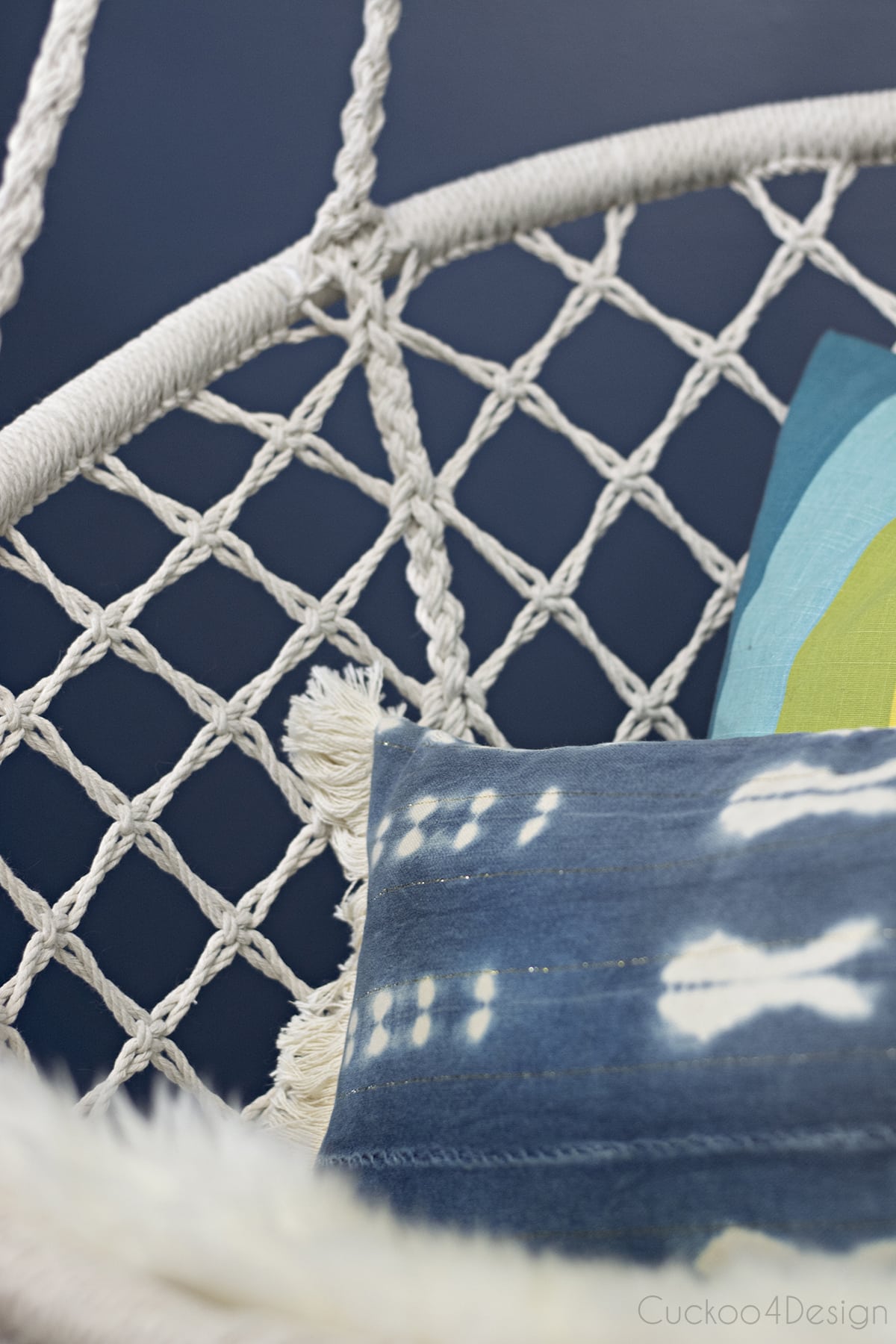 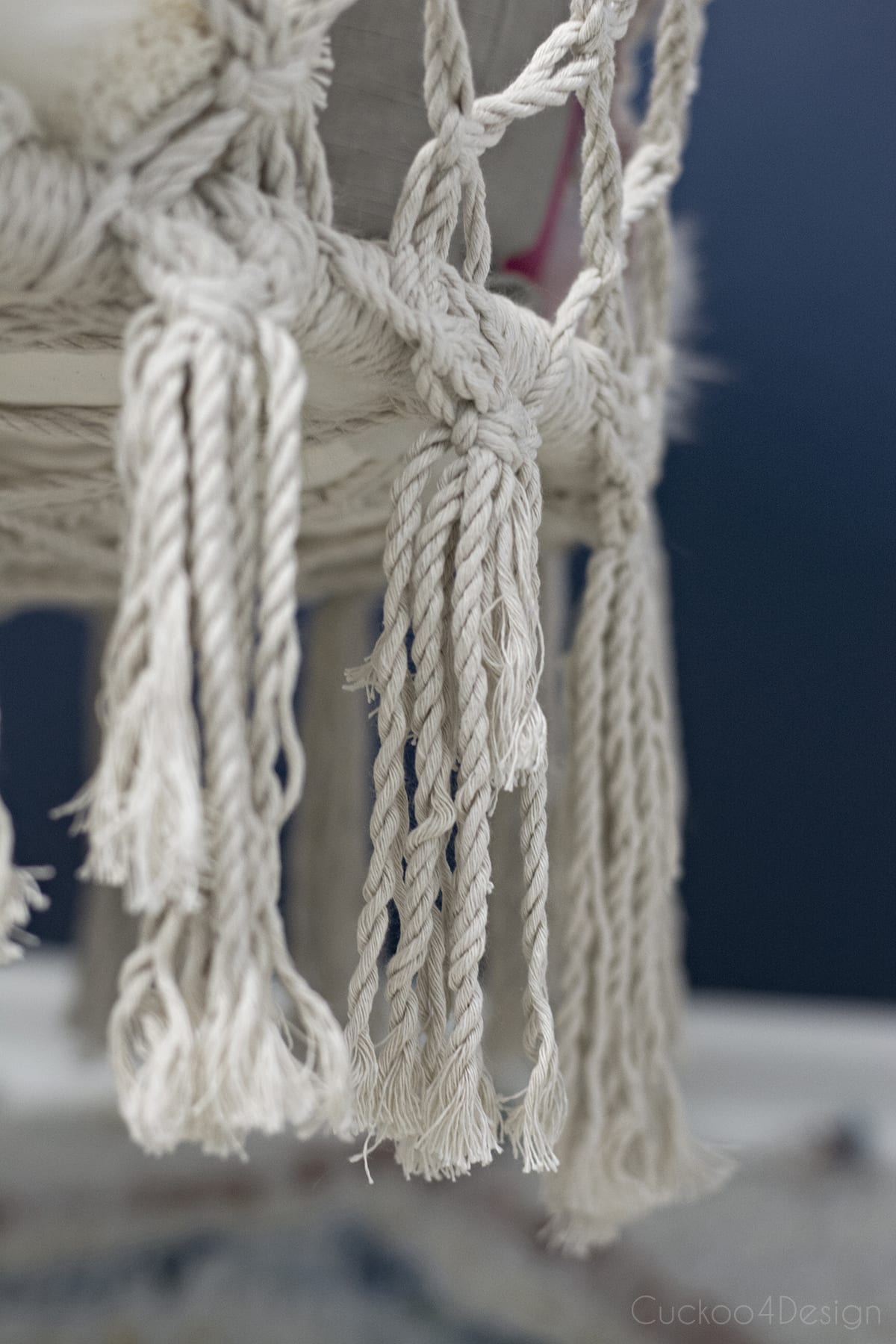 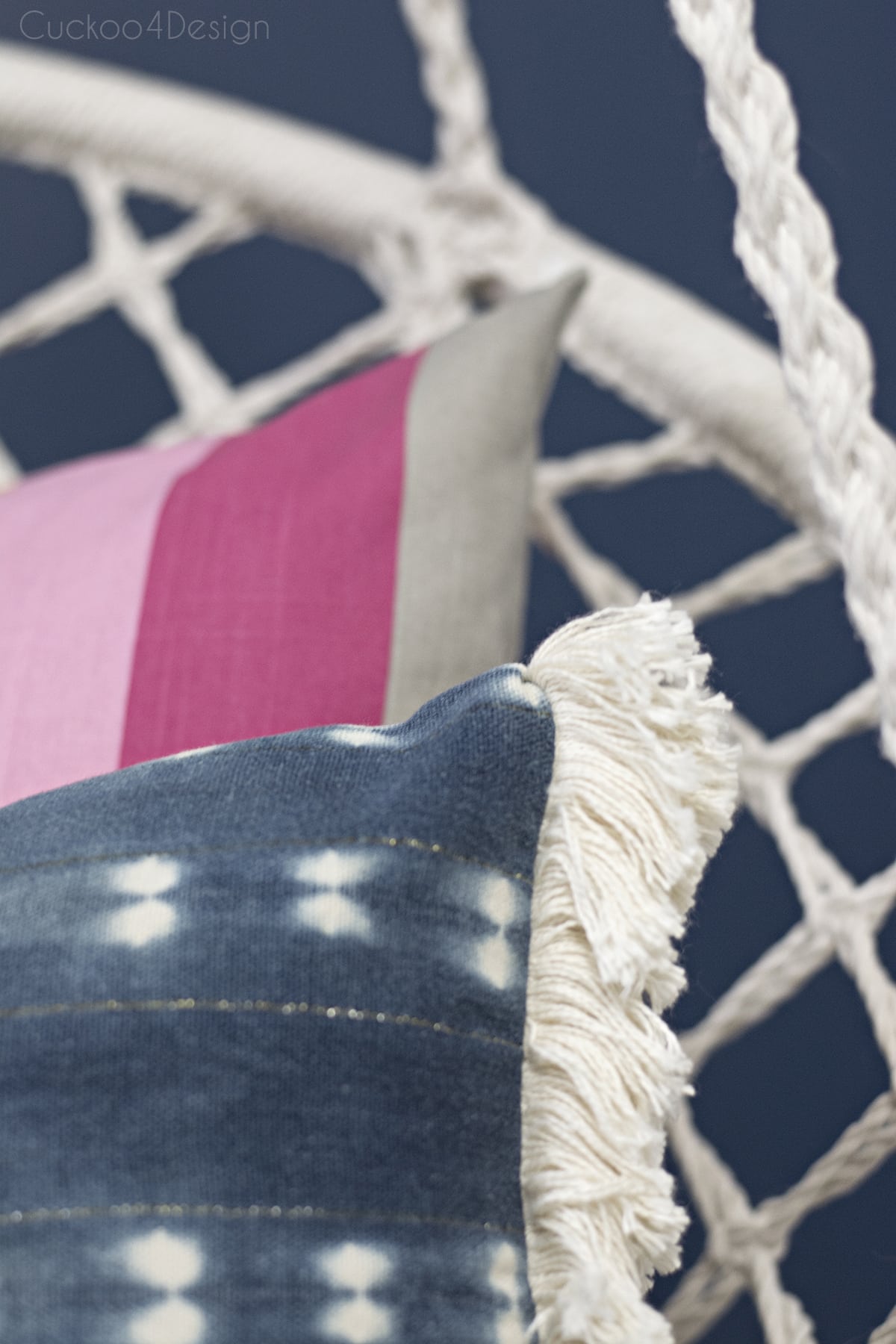 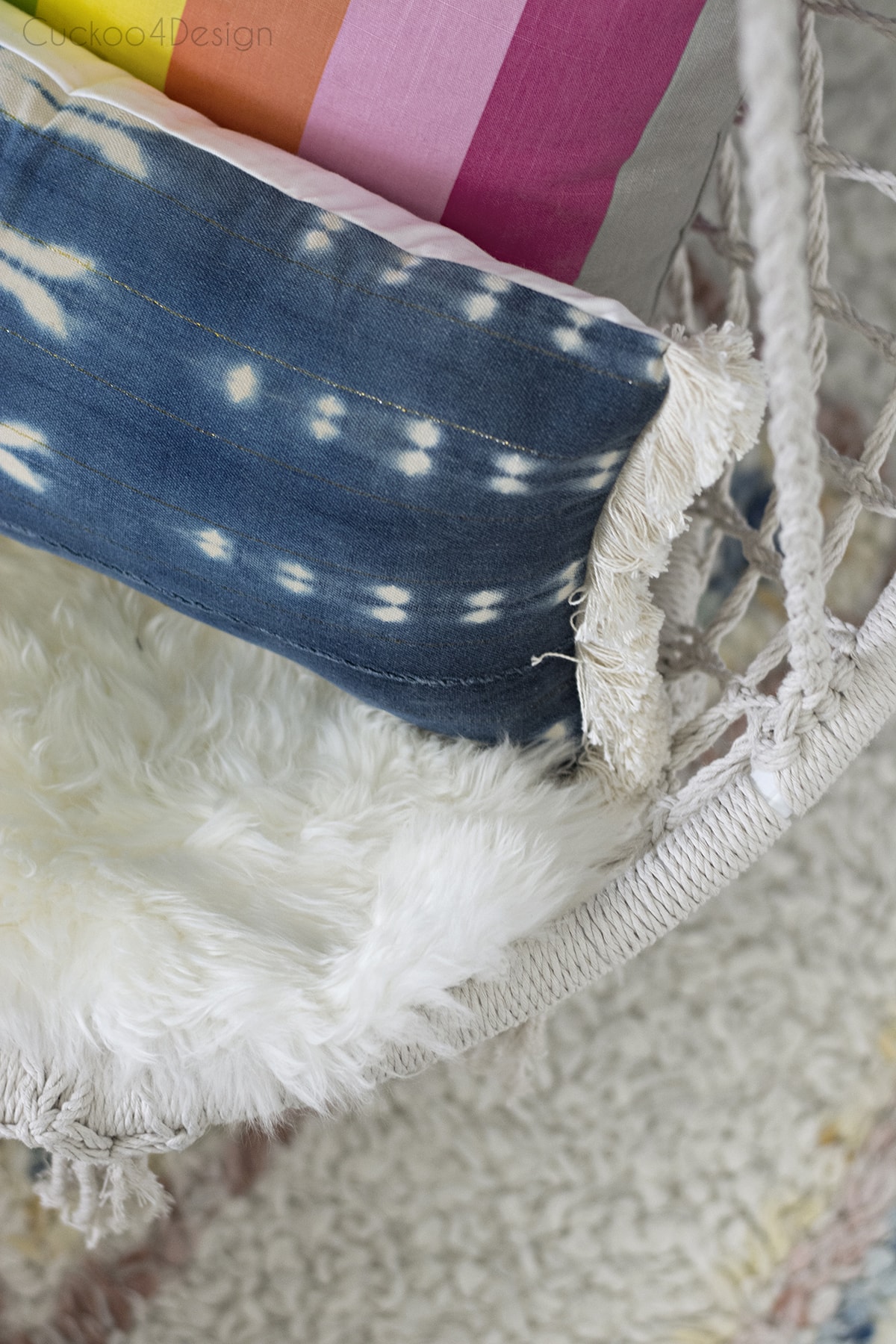 And in case you are wondering about the cats and the macrame fringe! 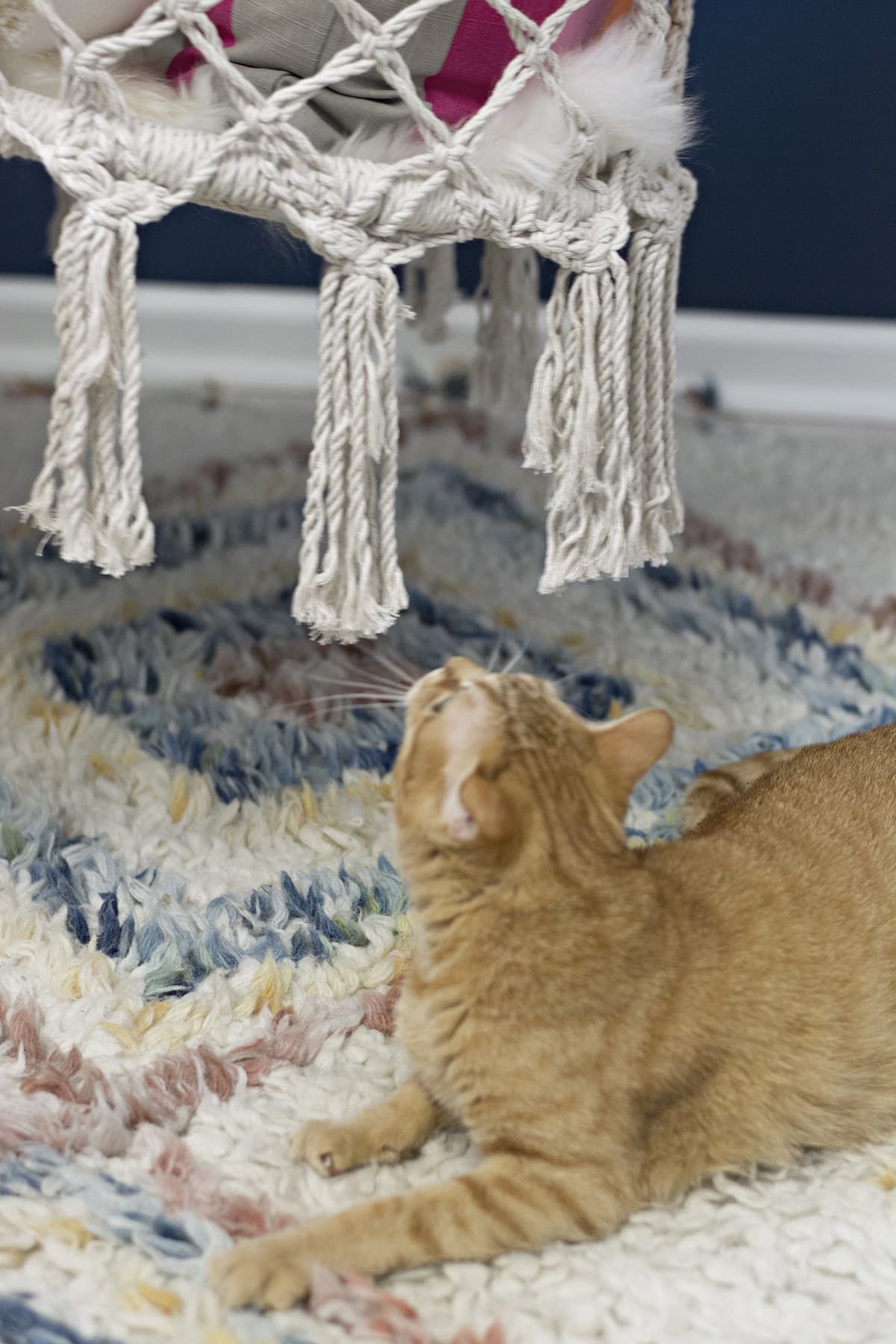 Yes! The occasional attack does happen but we are 100% ok with that. It’s funny and the chair can take it. 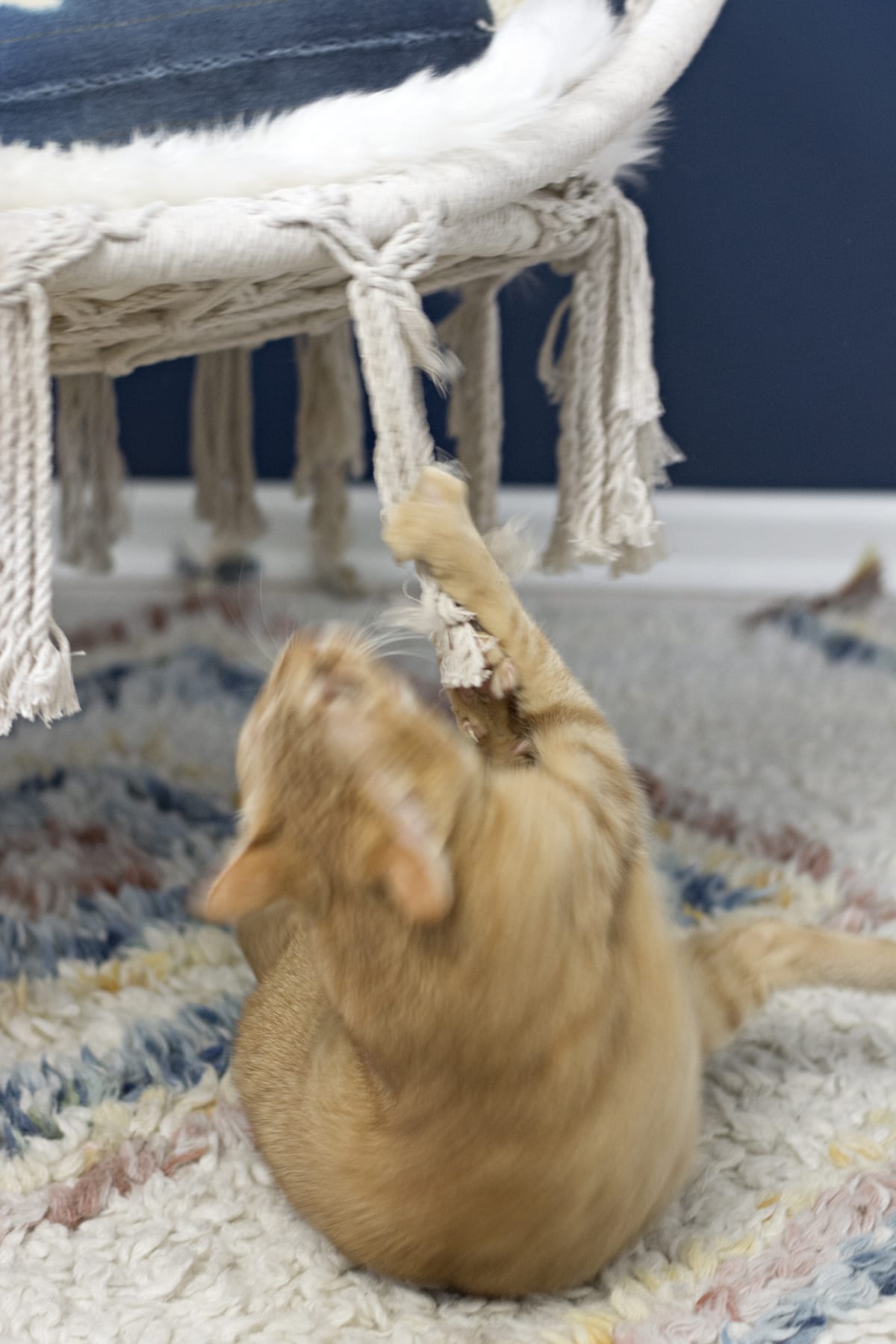 So lets hope we get some more done.

I am a participant in several affiliate programs which includes the Amazon Services LLC Associates Program, an affiliate advertising program designed to provide a means for me to earn fees by linking to Amazon.com and affiliated sites. To read more about this please check out my full disclosure statement HERE.
212Shares