Some of you have been waiting for the return of Living Pretty with Your Pets and I listened and brought back yet another sweet story for you animal lovers. If this isn’t your thing then wait for Monday and all the upcoming home tours.

I’m happy to introduce you guys to Ariel of PMQ for two and her three adorable furry kids. 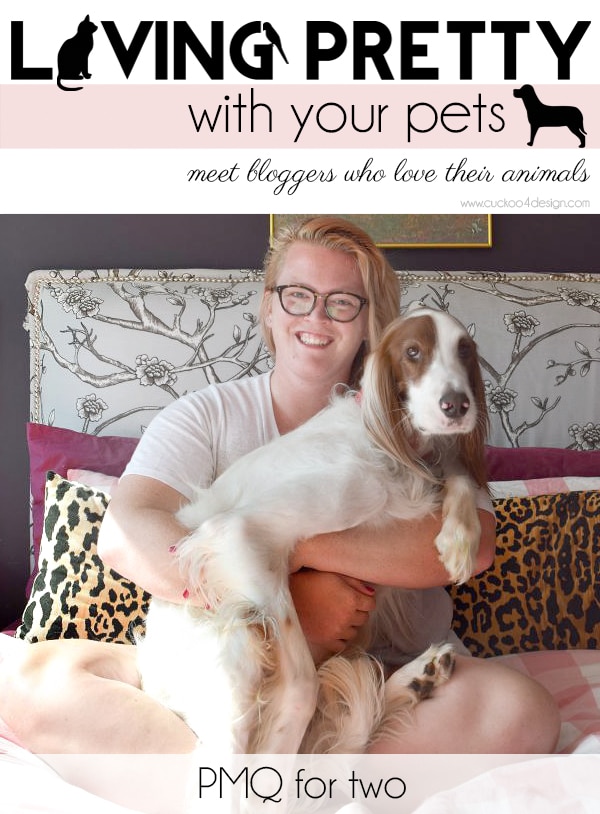 When you google my blog name, the fine print comes up as “And three pets.”
That should tell you a lot about me right there.

I love animals. Growing up my family has always had a pair of Siamese cats (Melchior+ Balthazar and now Caspar + Dr.Wu), and when I was 10 we added a Daschund named Charlotte to the mix (who has since passed after 15 years of wonderful life).
Despite being family pets, my parents always joked that the cats were really mine, that I shared a special relationship with them and that I was secretly getting up to all kinds of mischief with them. This is partly true, but mostly they would meow at me, I’d look at them and say “I know!”

Needless to say, they were devastated when I moved out and on to University.

For my undergrad I went to school in the same city that I grew-up in, so it was never an issue going home to get some pet love. But when I moved to another city to do my Masters – where I met husband – I was incredibly lonely.

Most of my friends and classmates had gone on to Europe and the States for law school and prestigious research masters, while I went on my own to The Royal Military College to do a Masters of War Studies (sexy title eh?).
It was a lonely first year, no friends, no pets to come home to at night, and a lot of time spent studying and working in my home office. When I came back after the Christmas break, I decided I needed a cat.

Growing up, all our pets came from reputable breeders, but at 21 working as a bartender and in school, I didn’t have the money for a purebred anything. I also wanted to adopt an older cat.
Kittens are always the first to be adopted (because they’re so stinkin’ cute!), but older cats usually get put down because they take-up space in shelters and can be harder to integrate into an existing pet household.
I began my search on the local SPCA website and came across The Boots’ profile. He was top of the page, listed as: 4 yrs old, Male, part Main Coon, adopted and returned three times. For his description all they had written was “he likes to cuddle and look out the window. Do you have a lap and a perch for him?” I was sold. 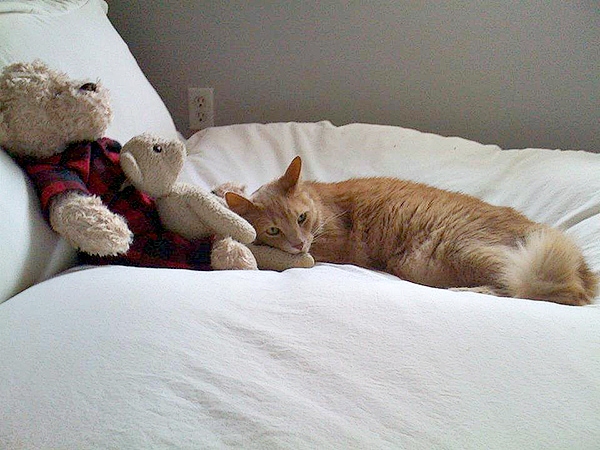 I went to pick him up the next day and I knew my life would never be same again. I had a partner. That first night as he grabbed my arm with both his paws and fell asleep, I knew I had made the best decision and that I would never be lonely again.

Two weeks later I met and started dating the man who became my husband. That summer, when we packed me up to move me to our first base posting (where I finished my masters at a distance) Boots was front and center and only escaped the car once! It was at 6am while fueling-up a gas station to start our 12hr drive, my husband dove under a parked big rig to catch Boots by his tail. Eeny, meeny, miny mo. 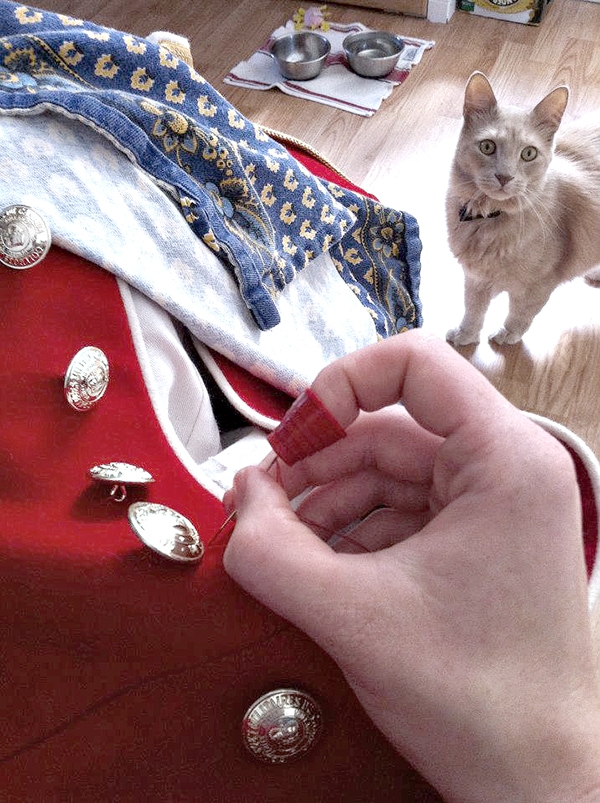 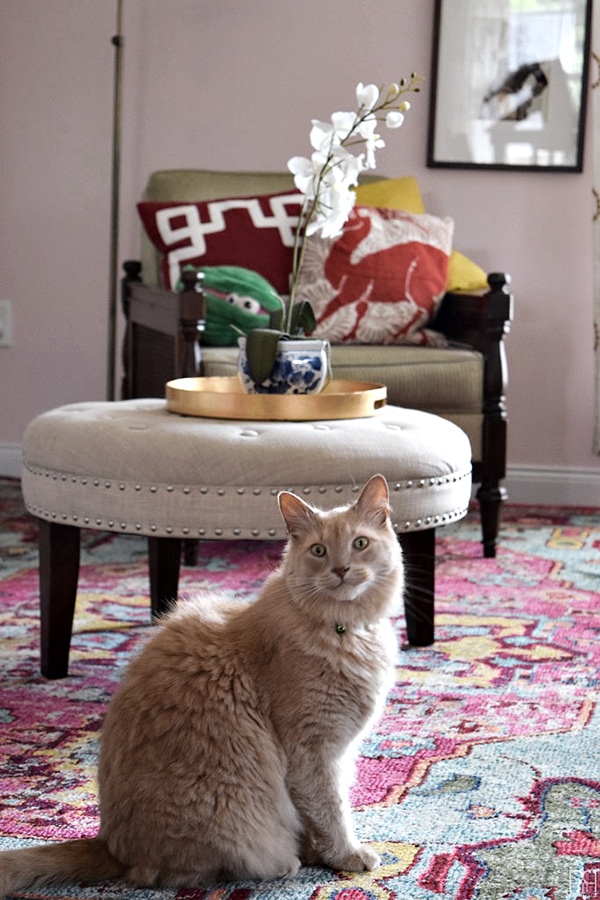 Around the same time, we were looking at getting a puppy. You could call us young, dumb, and in love.
My husband wanted an Australian Shepherd because he had grown up with aussies but the price tag horrified us though. We soon after stumbled onto a page for a litter of Red and White Irish Setter puppies one province over. This was a breed neither of us had any experience with, but they had a puppy they were selling as a companion dog because he had a slight overbite, so he fell into our price range. Sold! 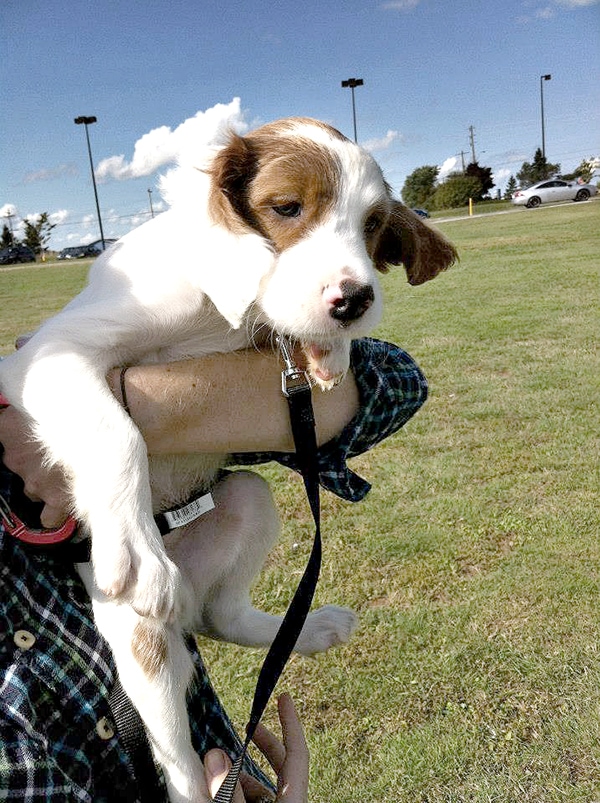 Six weeks after uprooting my life and moving Boots to Gagetown, New Brunswick we were on the road to go pick-up our new puppy. We thought we knew what we were getting into, and we thought that my husband would be around to help raise him for the first few months because I’m mostly a cat person. Wrong!
The concept of “plans” and “Life in the military” rarely intersect the way you want them to. 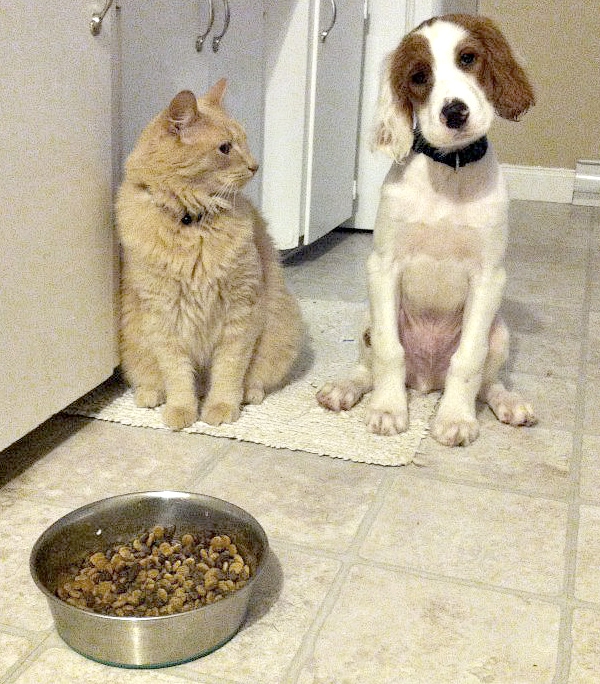 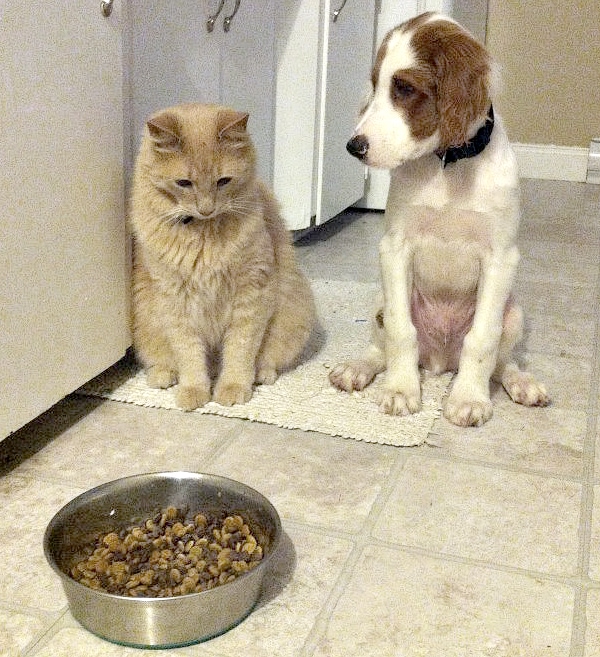 Two weeks after bringing home a puppy, eight weeks after moving half way up to Eastern Seaboard to a place I had never been, my husband proposed and then promptly left for six weeks to go to the other end of the country for work. This, my friends, is a standard army timeline. Massive upheaval, followed by long absences, and sometimes crushing loneliness.
Those first 6 weeks felt like an eternity.
Nothing has ever been as hard as that first EX, at my first posting, with two pets, a job, schoolwork and no friends. 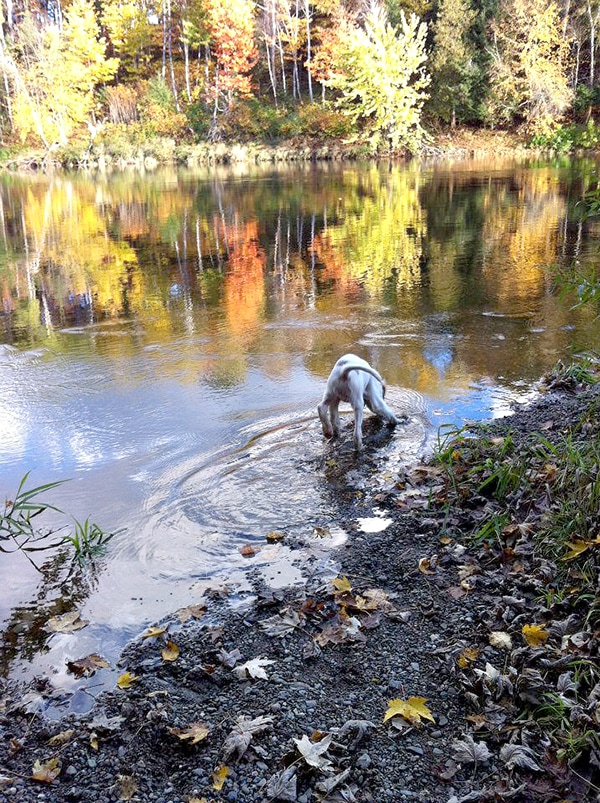 Bruce, Boots and I had a crazy road trip during that absence. The car caught fire and I had to sell it for scrap, Bruce had exploding diarrhea in a hotel room, and another escape attempt at a gas station by Boots (I have since learned and tether all pets before opening doors at gas stations). 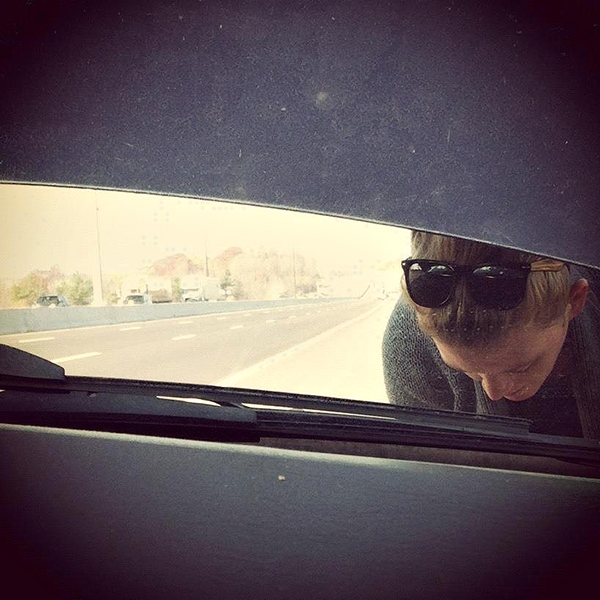 My husband returned and life went on the way it does. That next summer we were posted again, and when we got to our new destination we decided that Boots needed a friend. Sure, Bruce gets to go on all kinds of cool adventures out and about, but Boots is an indoor kitty cat, so he needed a friend, someone else to look out the window with. Enter – Toby. 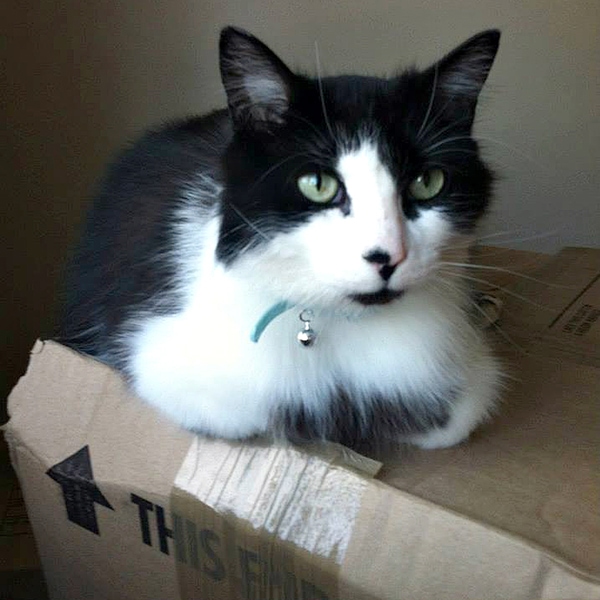 When we were visiting our new base house, we got to chatting with our new neighbors who said they had been feeding a stray. They found him in a snowbank around Christmas as a kitten. He had been declawed on all four paws, neutered, and dumped in the snow. We took him that day.
We named him Dr. Tobias funke, Analrapist (this only makes sense if you’ve seen The Arrested Development franchise) but he should really have been named Buster, because for the first 3 years with us he was “rarely seen and never heard.”
He wasn’t microchipped at the time, so we think a family dumped him before a move. In Quebec, peoples’ attitudes towards pet ownership are very different. 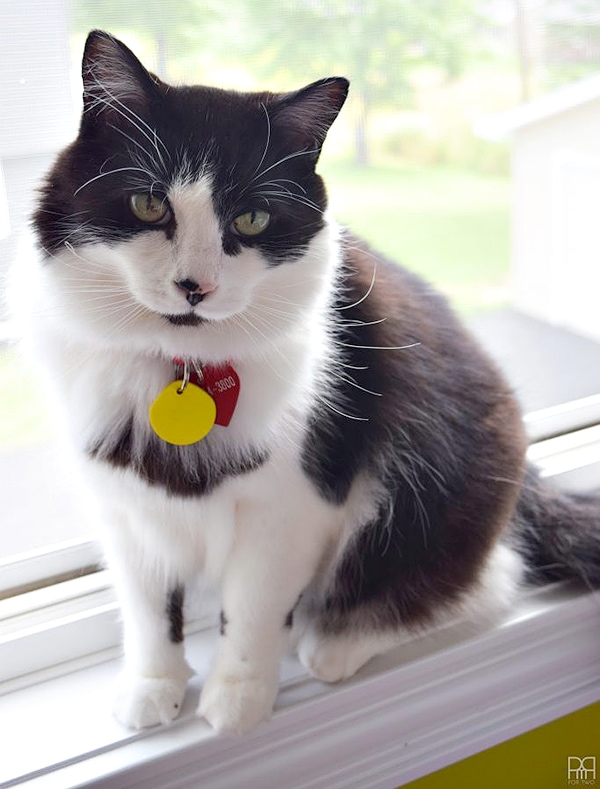 For the past 4 years our family has been that of a PMQ for two, and three pets.
I would love to add some chickens to the mix, but as long as we’re in base housing it’s not feasible (or allowed). One day! You can catch glimpses of the pets on Snapchat, in the background of my blog photos, and usually in all the pet hair stuck to me. 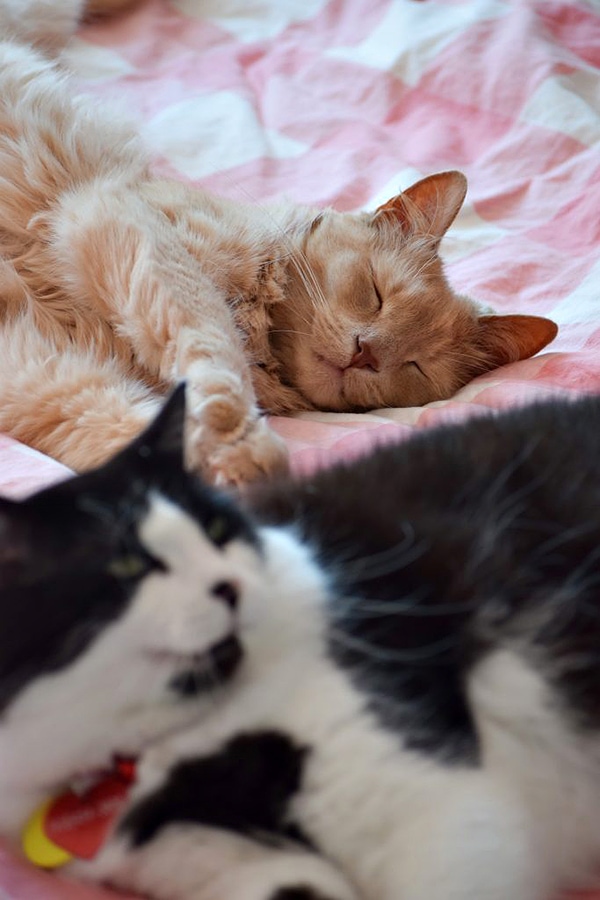 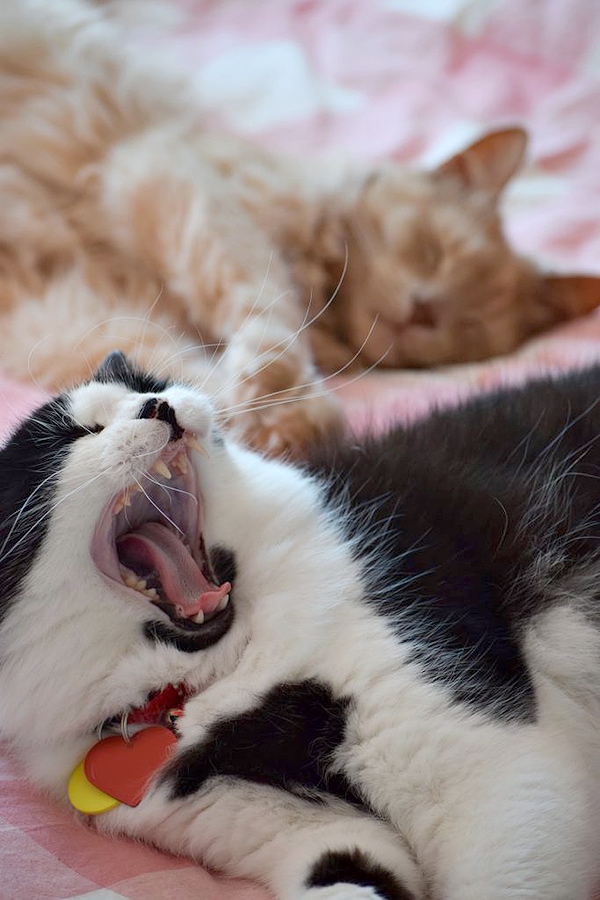 You can read more pet stories by clicking HERE.

Aren’t they all just so sweet? I love that Boots found a home after being returned so many times to the shelter. Poor little buddy.

And who on earth would dump a declawed kitten in the snow?!?!

Let me show you two of Ariel’s projects yet before you head on over to her blog for a visit. 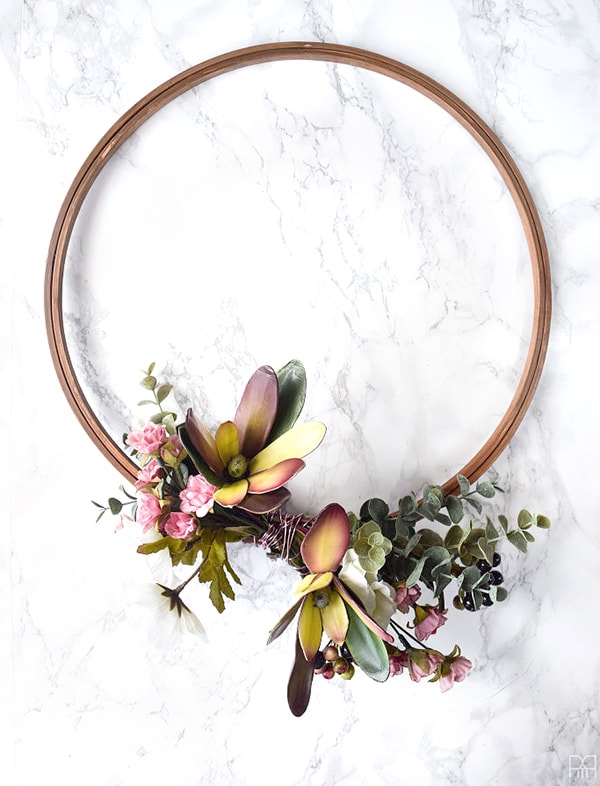 Love this plate charger DIY Ariel came up with. 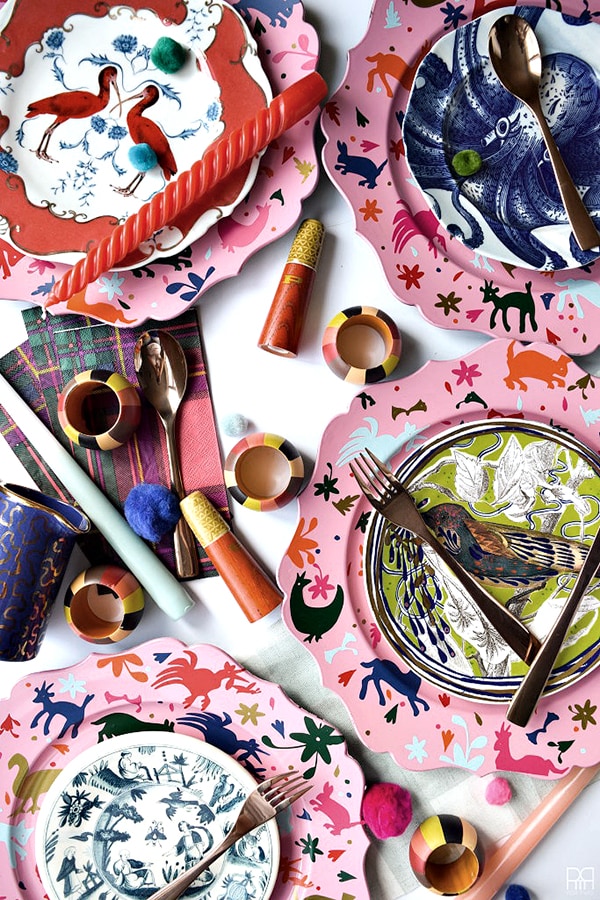 And one more thing, I know I’m starting to be a pain in the rear but I just have to ask 😉

Have a wonderful weekend my friends.