Today we finally have another kitty cat to share with you. I ccouldn’t wait to introduce you to Angela and her little furry man. She is sweet, talented and paints a piece of furniture like no one else. Her home and style is such eye candy too. So here she goes.

Hi everyone! I’m Angela from Number Fifty-Three and I am so super excited to be here to at Cuckoo 4 Design! While I am beyond infatuated with Julia’s home and her daring designs, what really grabbed my attention about her was her completely caring nature towards animals.

I have loved animals, especially cats, since I was a small child and I almost always had one growing up. I loved them so much, in fact, that my Mom actually thought I would be a vet when I grew up. It’s probably best that I didn’t though, since my math skills are pretty laughable and I get attached way too easily. 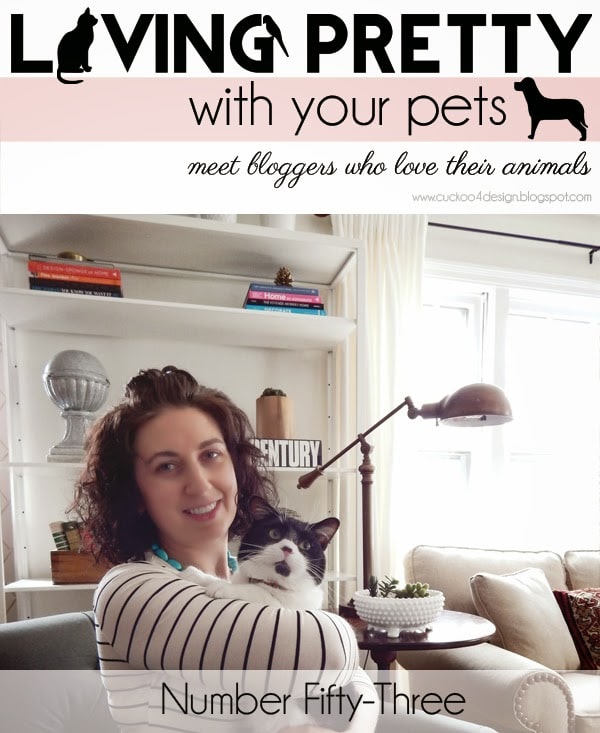 After going for a huge stretch of time without a pet, we adopted this little guy, Figaro in November 2012.  Here’s his pathetic adoption picture. 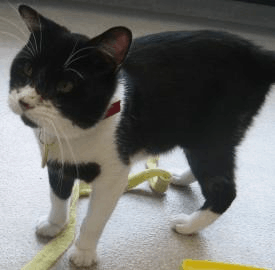 It makes us want to cry when we see how small and thin he was back then.
His name when we got him was Rooftop since, that was, in fact, where he was found. The woman who discovered him coaxed him down and brought him to the shelter. And, he was there for months and deemed unadoptable because he was sick. (Apparently, it was his infectious personality that kept him alive there for so long).  Anyway, while at the shelter he was treated for fleas and mites (he is severely allergic), chronic upper respiratory infections and had several teeth removed because of a disease he was born with.  We also found out (after adoption) that he has ear polyps. This could mean major surgery at some point for him, or it could never fully cause a problem. Even with all this we couldn’t leave him. Even if it meant just having him in our lives for a short time. 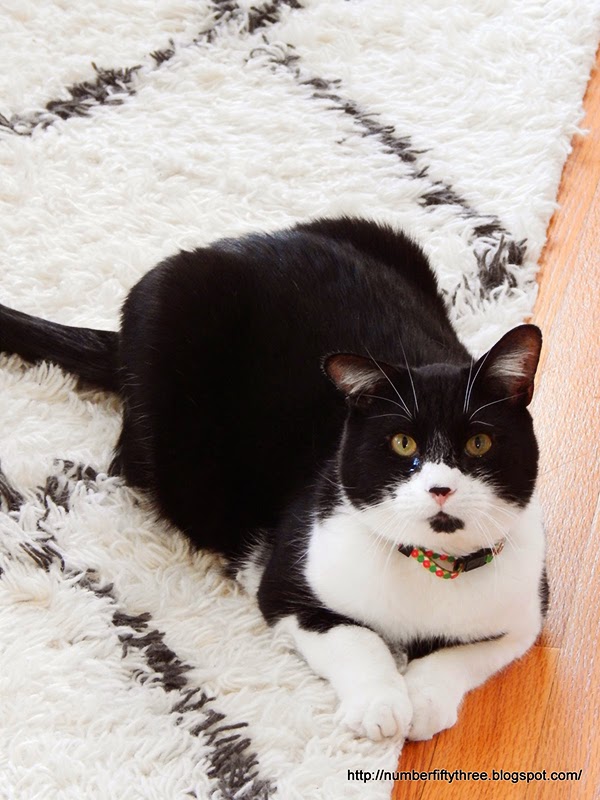 Anyway, I wish you could all meet Figgy in person! He is such a love and so super sociable. He’s intelligent, a great communicator and super cuddly. 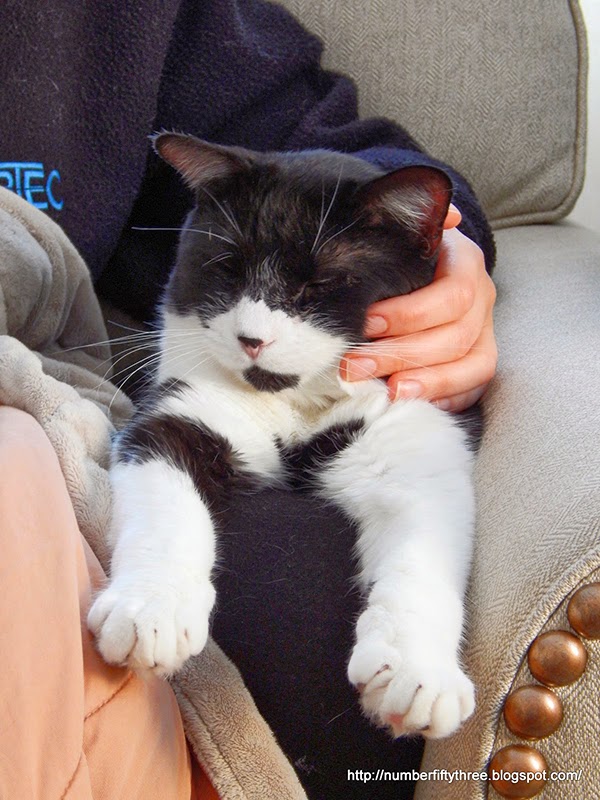 I think it’s pretty safe to say that I am completely in love with our little guy! Luckily, I haven’t totally turned into a crazy cat lady because our vet wants him to be the only kitty in the house because of his respiratory problems. 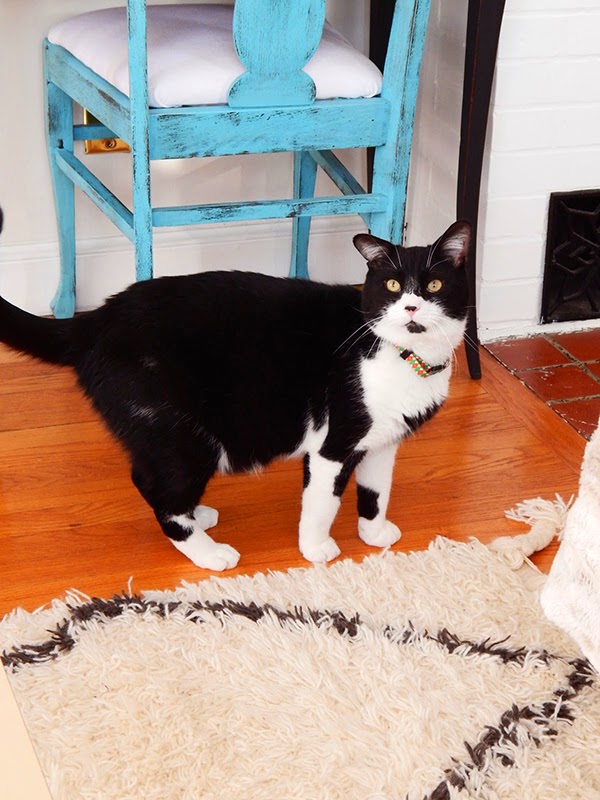 Living pretty with him, though, has come with its challenges.  Given that he was found on a roof, it’s no surprise that he likes to be up high and would prefer walking on the furniture rather than the ground.  He also loves to knock things over and watch them fall to the ground and shatter. It’s seriously irritating, but has made me a better decorator as everything in our home is carefully placed, thought out and edited. 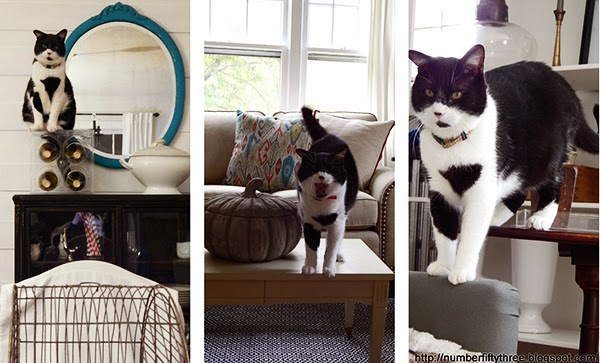 The other thing about Figaro is that he doesn’t do a whole lot of sleeping during the day. He seriously fights it. But, here is a picture I snapped a little bit ago of him napping on the couch with his stuffed bug… 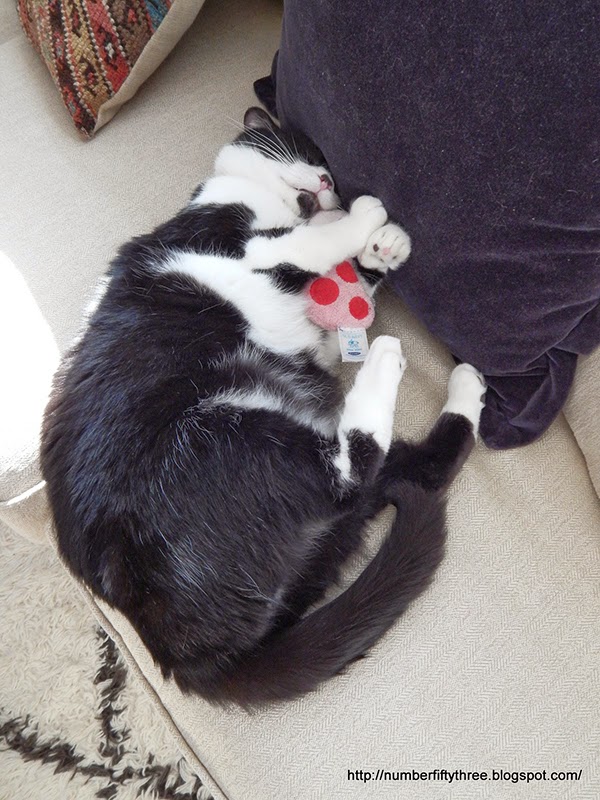 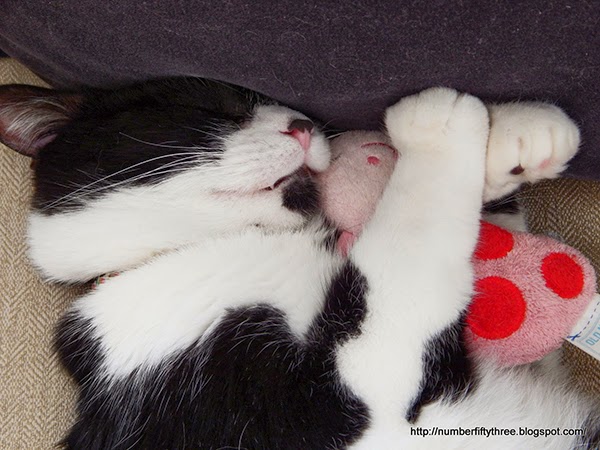 He also doesn’t make washing a priority. I know, so totally weird. A few minutes a day is all he’ll devote to it. 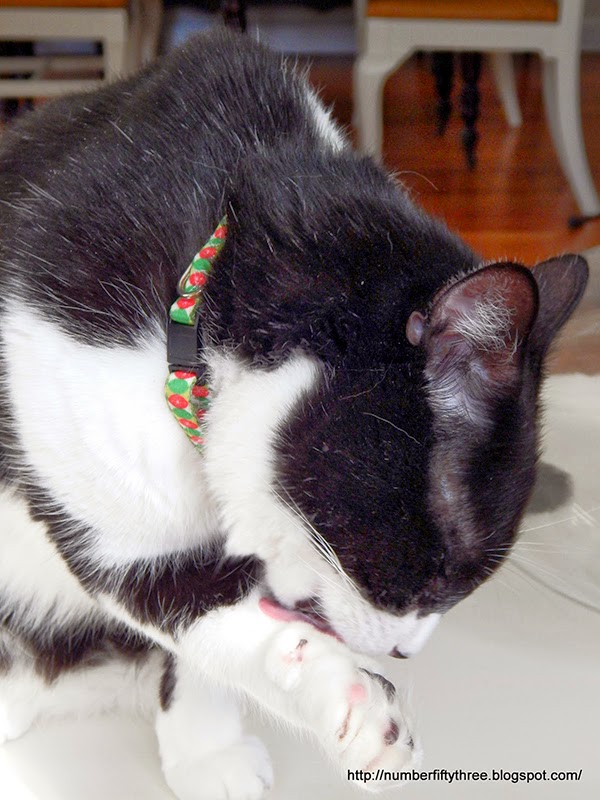 He’s far too busy photo bombing. If you follow my blog, you know that he is always popping up in my posts. The second he hears the camera he comes running and loves to pose. 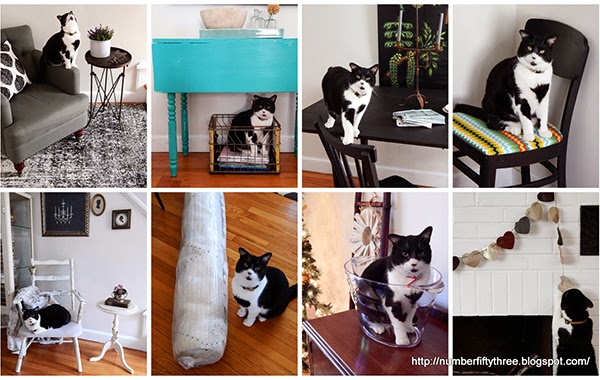 Figaro and I welcome you all to stop by Number Fifty-Three and take a look around. Thank you again for having us, Julia!

I love little Figaro. He adore his photobombing ways. Make sure to visit Angela, Figaro and her blog by clicking HERE.

It’s been a great anniversary week. Hasn’t it?
Have a great weekend. I’m off to an estate sale this morning with a friend.