I’m not breaking with my Friday Pet Series tradition even though it’s Easter weekend. No Easter post around here. Actually there has been a major lack of seasonal decorating posts around here, but it’s just not really my cup of tea. I do the regular egg crafts with the kiddos and that’s about it. Nothing fancy!

I can’t wait to introduce you to today’s furry star Zoey who is Elizabeth’s (from Little Black Door) adorable dog. I love her blog and she has amazing style and you have to check out her home tour by clicking HERE. 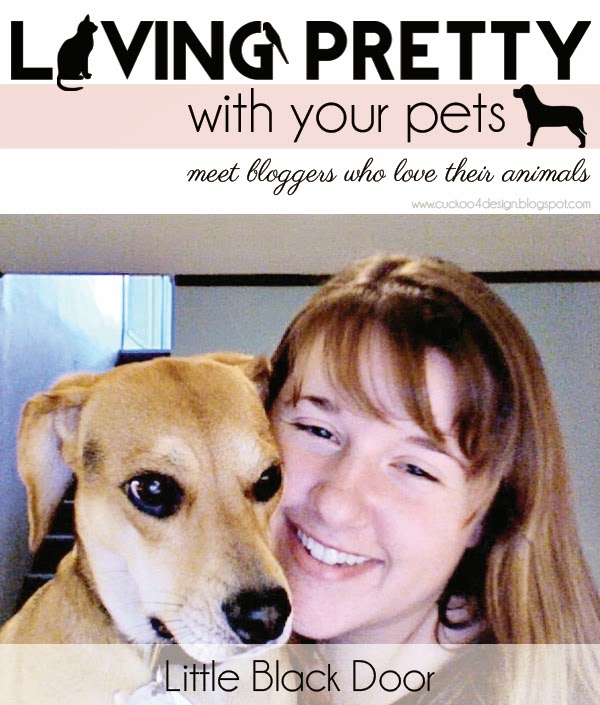 Hi Cuckoo 4 Design readers, I’m Elizabeth from Little Black Door and I’m so thrilled Julia invited me over today to talk about my first baby – Zoey.

Zoey is what we call “beagle-inspired” (we know she is a beagle but think she’s got something else in her as well) and she’s reigned over our house for nine years. She is the smartest dog I’ve ever known, and I have known many, but she is also a lady of many talents. 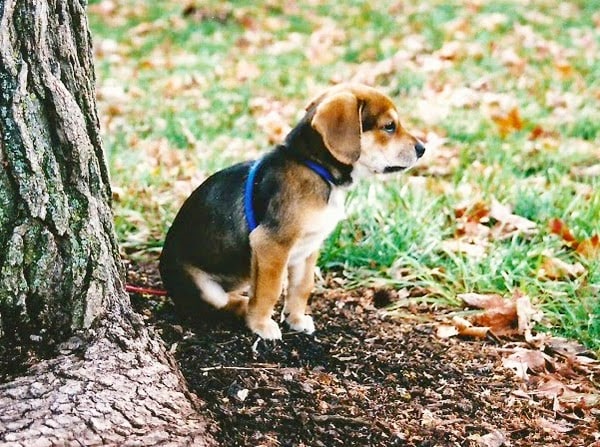 DaredevilZoey came to us thru Russ, a friend of my husband. He was coming home from a hunting trip when he said to himself “what’s that ball in the middle of the highway?” just as an 18-wheeler ran over it. That ball was Zoey. Russ pulled over and ran out into the highway to save Zoey, who was unharmed except for a little scratch on the top of her head. She was too tiny to have been away from her mother and we guess that Beagle nose led her off exploring until she ended up far from home (a classic Zoey move we would learn over time.) Zoey curled up next Russ in the car and was content the whole way home. Having several big dogs already, Russ and his wife Janet knew they couldn’t keep Zoey, so we were lucky enough to take her in. And lucky is the right word, as that’s what Russ named her thanks to her semi-truck survival. 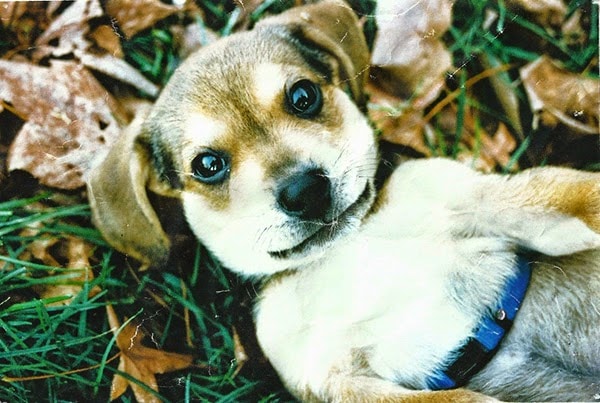 CovergirlWe fawned over Zoey just as any new parents do and took rolls and rolls (this is pre-digital people) of film. Zoey sleeping with the hubs on the couch. Zoey looking out the window. Zoey standing under a tree. This one, Zoey rolling in the leaves was one we particularly loved and Janet thought I should submit it to a dog calendar she gets every year (I told you they were dog people). So I submitted it and Zoey was chosen as Ms. October. She was in a national calendar sold in malls around the country and is occasionally still recognized to this day (by my mom) as the star she is. 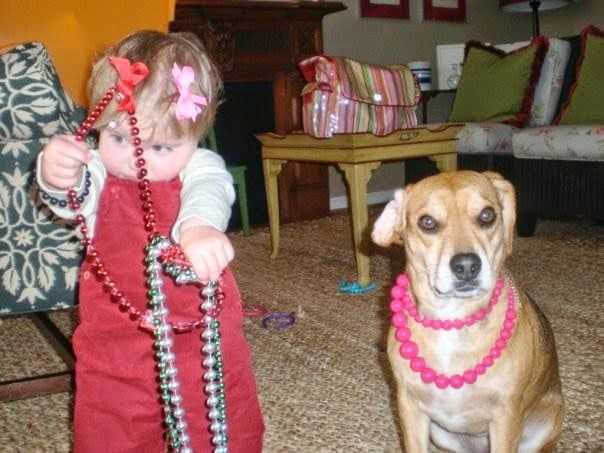 Life of the PartyZoey came to us when my husband and I were still in an apartment and the complex was full of kids. They were outside playing when we brought her home and went crazy over her as all kids do for puppies. A few hours later we had a knock on our door. “Can Zoey come out to play?” The kids would take turns walking her around the yard, wrestling with her, carrying her like a baby. Zoey was basically man-handled kid-handled for the first year and a half of her life and she loved it. Beagles are certainly pack animals and the more people she is with, the happier she is. 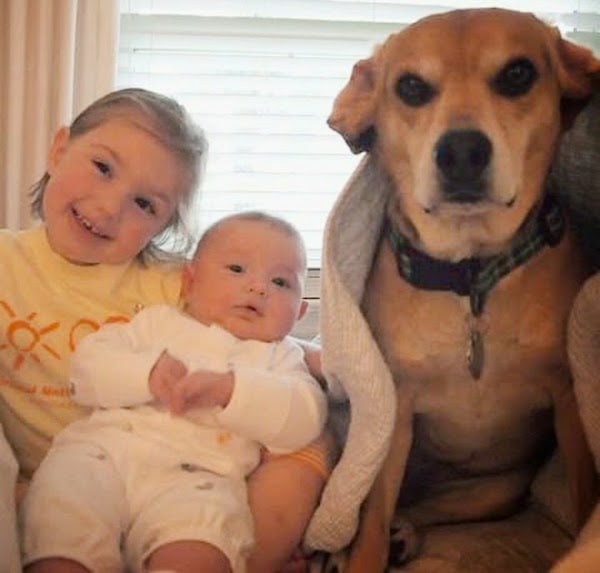 MotherThanks to all of that early exposure to kids, Zoey has always done an amazing job with our girls. Ever since they came home from the hospital she has cuddled, monitored, soothed and played with them. She takes her job as Jr. Mom very seriously and she’s very protective of her girls. 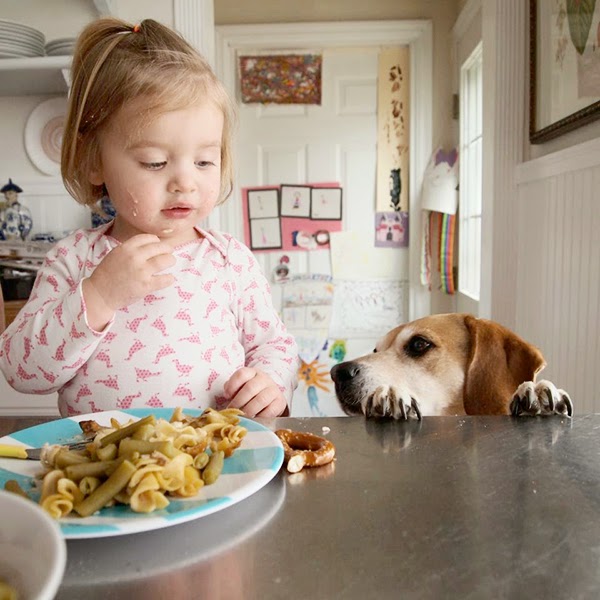 GoatWait, what? We often joke that Zoey must be part goat as girlfriend will eat anything, anywhere. She sneaks food from the girls plates on a daily basis and she once snatched a cupcake from a guest swallowing it whole, wrapper and all. Sticks, acorns, bugs, other ‘hunted’ animals (lets leave it at that), Thanksgiving dinner. She eats it all. Except lettuce. She won’t touch lettuce. Finger that one out. 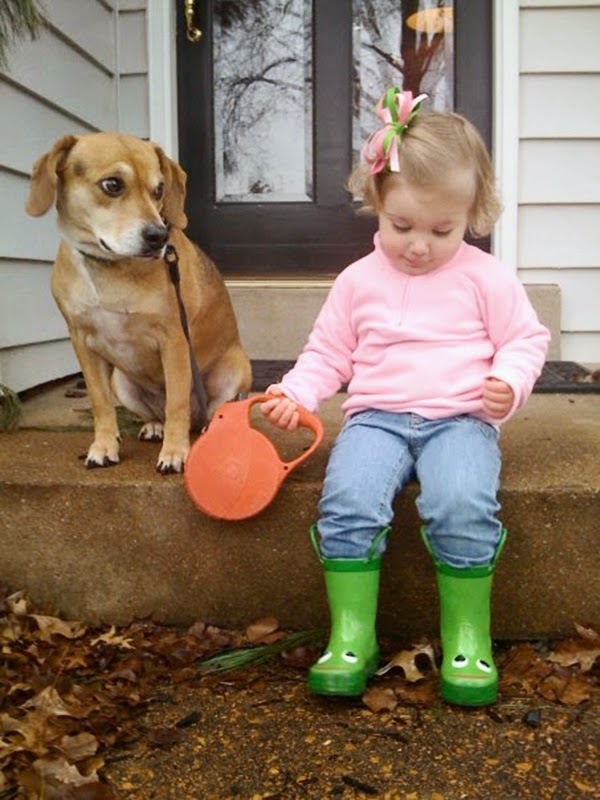 Hall MonitorNothing happens in our house, or on our street for that matter, without Zoey knowing about it. She walks the perimeter of our yard several times a day just like a security guard. She sniffs out every bag and purse that comes into our house lest some visitor tries to smuggle some tasty treats and our mailman Ken has confirmed that she is the loudest barker on his route. Good work Zoey. 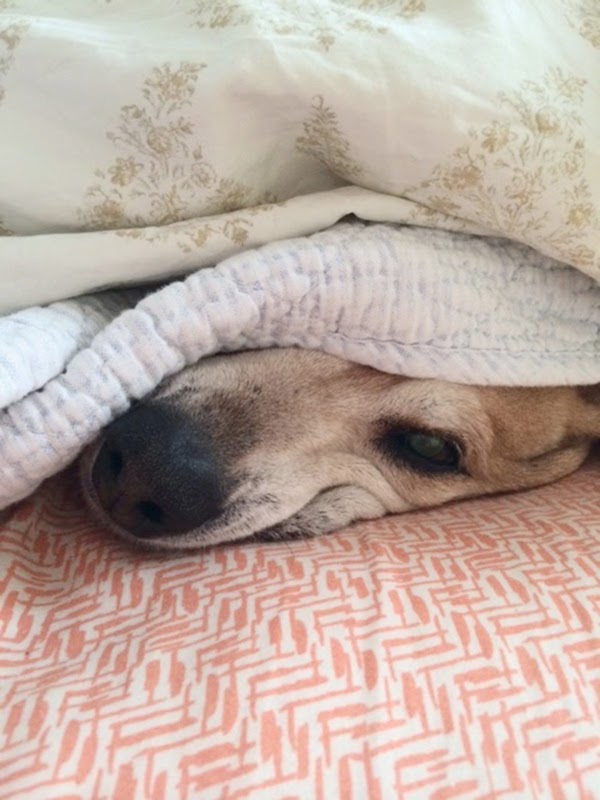 SpoonerZoey is an A1 cuddler. I’ve never known a person or dog who does it better. She sleeps in our bed, under the covers and spooned up against my legs every night (in addition to the two dozen or so naps she takes during the day). There is nothing better than getting into bed on a cold night and finding it all warmed up and ready for you, thanks to Zoey. 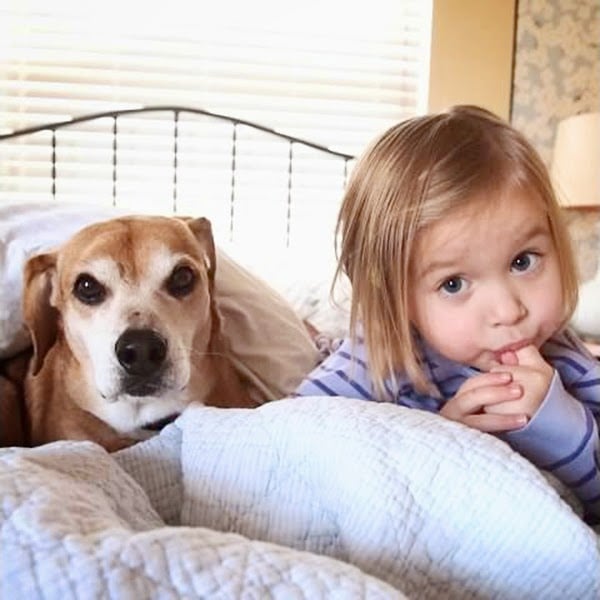 I could go on for days about our Zo-bop (as the girls call her). She’s getting a bit older and a little grayer, just like the rest of us, but she can still chase a bunny with the best of them. I couldn’t have asked for a better dog.

I would love it if you guys would visit Elizabeth’s blog (click HERE) because she is fun with amazing style and obviously the perfect adorable family.

To read more animal posts you can click HERE.
One more thing before we are all off to our family filled Easter weekend:
My blog buddy Cassie (Primitive and Proper) and I decided to call an official “Blog Spring Break”. I really really need it! There are so many things that need to get done and I also promised the kids a bunch of things. That means I won’t be back with another post until next Friday.
I wish you guys a HAPPY EASTER and a great spring break.