I’m just so out there sometimes. I didn’t mean I wasn’t going to have a pet post today, I meant next Friday. Duh!!!! Sorry about that. I’m just going a little crazy with snow in the forecast again for today. Yup first day of spring and snow and having to plan out patio decor on a deadline for HomeDepot… Lets just move on and focus on a cute pet story…should we?

This week I want you guys to meet Corinna from For My Love Of. She is so sweet and super talented and comes up with amazing ideas and you know that having adorable pets is always a bonus too on my blog. Just sayin! 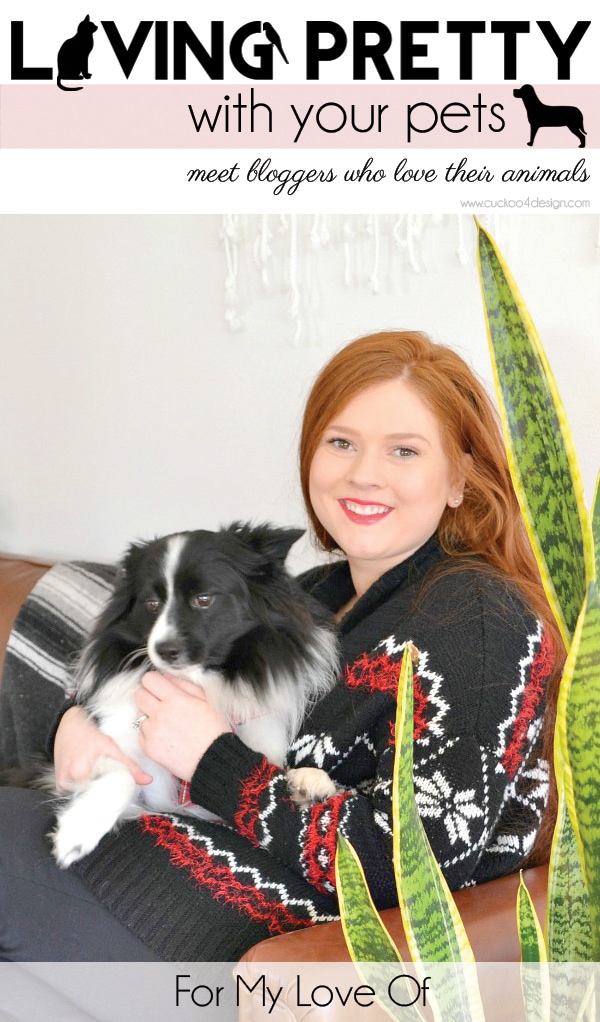 Hello Friends of Julia! My name is Corinna and I chronicle my DIY adventures, thrifting and first time home owner improvements on my blog, For My Love Of. I’m really so happy that Julia has allowed me to share with you the story behind my kitty and pup.

I’ll start with my Jeckyl. He’s a big ol’ black cat with a personality that takes a lot of getting used to. I adopted him from a local shelter when I was just a teenager living with my parents. He was part of a litter that had entered the shelter but he was ill and wasn’t available for adoption until after his brothers and sisters had already been adopted out. He was such a husky little guy and I fell in love with him immediately.

When he was a kitten, he was the sweetest little guy. He slept curled around my head at night and was just as curious as a little kitten could be. He developed spunk. He enjoyed sneaking into my craft stash and would pull out pipe cleaners and pom poms to play with. I just loved coming home to see them all over my room. 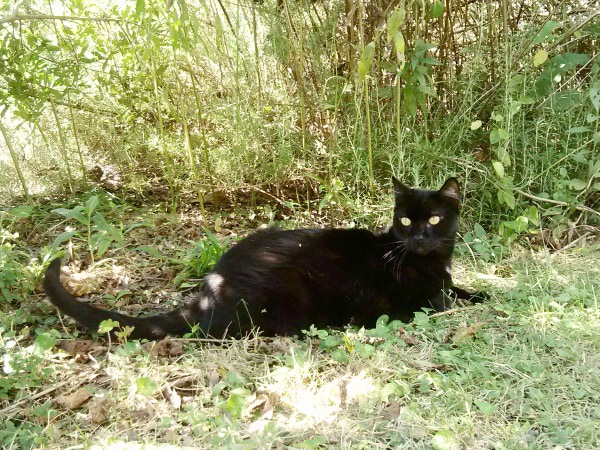 Around this time is when I started picking up betta fish and had a rainbow of colors in fish bowls throughout my room. The poor fish! Jeckyl liked to bat them out of the water and I only saved a couple of them. I rigged metal mesh tops for the bowls after I figured out how they were meeting their end. I feel so bad about it now. But it was just spunky little Jeckyl looking for something new to play with.

There were a lot of moves in my and his life after I moved out of my parents house. I began to notice he wasn’t as happy as he used to be. One move, another move, then I met my husband, another move, then we adopted a dog, then I became pregnant, then we bought a house. He lost all of his spunk and retaliated often after the last move. I hated to see him go, but he lives with my parents under the care of my younger sister. I see him all the time still and he’s regained a lot of his old spunk back after having stability (and being “the baby” again ;)). He spends his days there lounging about in pools of sunshine and sneaking out little bottle caps and pens to bat across the floor. I’m so happy he and I can be friends again. 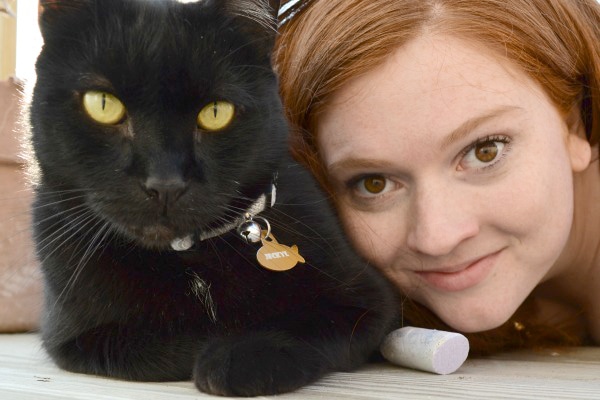 The dog that we adopted is Bayer (like Bayer pharmaceuticals, I work Pharmacy by day lol). This dog is everyone’s best friend. He literally won’t leave you alone until he conquers your heart. I say we adopted him, but we actually found him through Craigslist. I felt so bad for him after seeing what he was living like and we took him home right away. He was 6 months old and the seller claimed he was pure bred pomeranian. But he’s so much bigger than a pomeranian. More like a small collie for size. Our best guess as far as personality, size, and mannerisms is an American Eskimo.

He’s definitely a barker. It drives us completely mad but he genuinely can’t help it. He gets this look on his face like he wants to stop, but the compulsion to bark is just there. Other than that and stealing people’s food the moment we look away, he’s such a joy in our lives. He’s the perfect balance of active and lazy. Bayer will lie on the couch watching movies with us for hours and then go right into the backyard to play soccer. 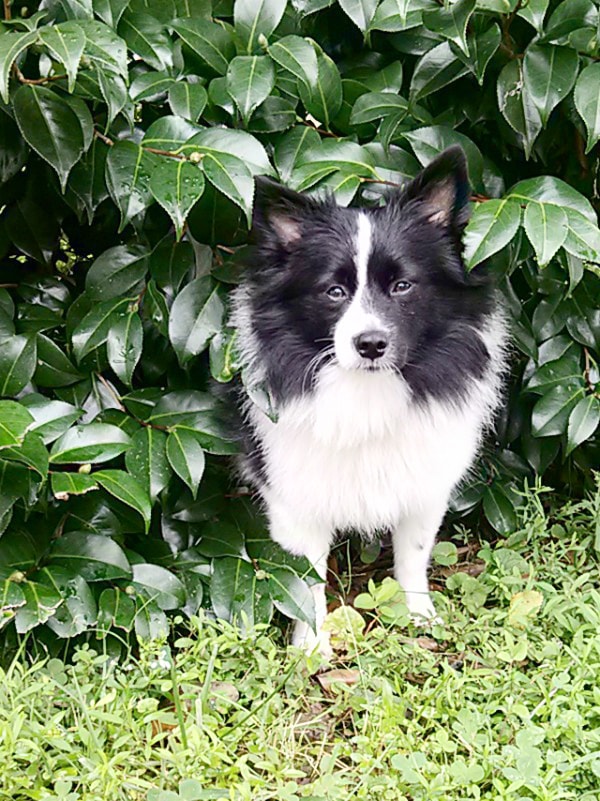 I remember when my son was a baby and would cry, Bayer would get so concerned. He’d run from wherever in the house he was to sit beside the baby and sniff the baby and look at us like, “What’s wrong with it, why haven’t you fixed it!?” He makes these faces when we talk as if he’s truly understanding what we say.

With his long fur and happy-go-lucky personality, people are always approaching us to tell him how he’s so darn cute. And he’s quick to soak up the attention. If you leave a hand hanging off the arm of a couch, he will stand up and put his chest to your hand begging to be pet. He enjoys lying on the back of the couch like a cat, sitting on the center console on long car rides, being pet and rolling around in grass.

Our son is coming up on 3 years old and he’s a feisty little boy so it makes me so happy that Bayer is as mellow as he is. Because my son and Bayer go to my parents house while I’m at work, Bayer spends a lot of time with the same younger sister that cares for Jeckyl now. She’s taught him so many tricks. He’s such a smart little dog! He can sit, stay, come, lie down, give high five, give paw, and dance. 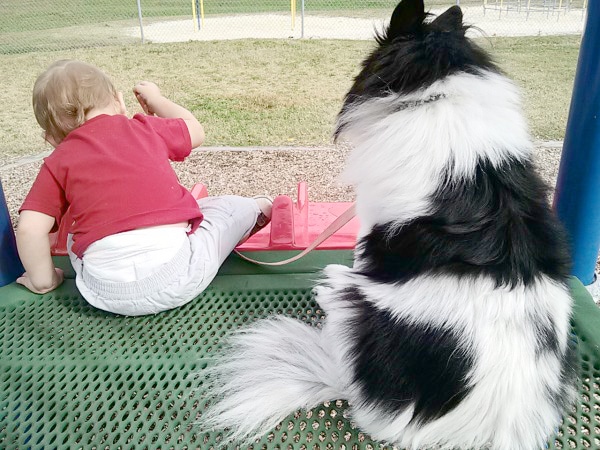 I never pegged myself to be a person who would enjoy having a dog. I’m much like a cat, so I always thought that I’d soley be a cat owner. But Bayer conquers hearts with his energy and affection. Thank you so much for reading my pet’s story and and thank you Julia for giving me a platform to share it on!

I’m feeling the love again this week and that’s what this series is all about. Love a family like this. And I’m so glad that Jeckyl is happy again at Corinna’s parents house. Cat’s truly hate moving.
I’m also so glad that they were able to give Bayer a great home because I’m sure you have heard about the awful stories what can happen to pets on Craigslist. Ugh lets just change the subject!!!

And since I have been painting some artwork here and there again, which you might have noticed if you follow me on Instagram, I want to show you Corinna’s awesome artwork.

Look at these amazing water colors Corinna painted and you can download them for free from her blog:

And I love her fun posts:

So head on over for a visit at Corinna’s house by clicking here.

And don’t forget to have a great weekend. Hope your spring starts better than ours 😉