I’m back and hoping you are all able to receive my posts. This was such a stressful move and I feel like so many things are still messed up. Hang in there with me, will you?
I still have to figure out how to reply to your comments by email but I promise I’m trying.

I also had my DIY magazine shoot on Monday and Tuesday and will post about it hopefully next week. It was so much fun and I learned some new things.

Now lets get back to Living Pretty With Your Pets shall we? I’m so glad to finally have someone as a guest who is as crazy about cats as I am. She has 4 cats like us and they are all adorable. And on top of it her house is stunning. And did I mention she is gorgeous and very smart? Please meet Sarah from Life On Virginia Street: 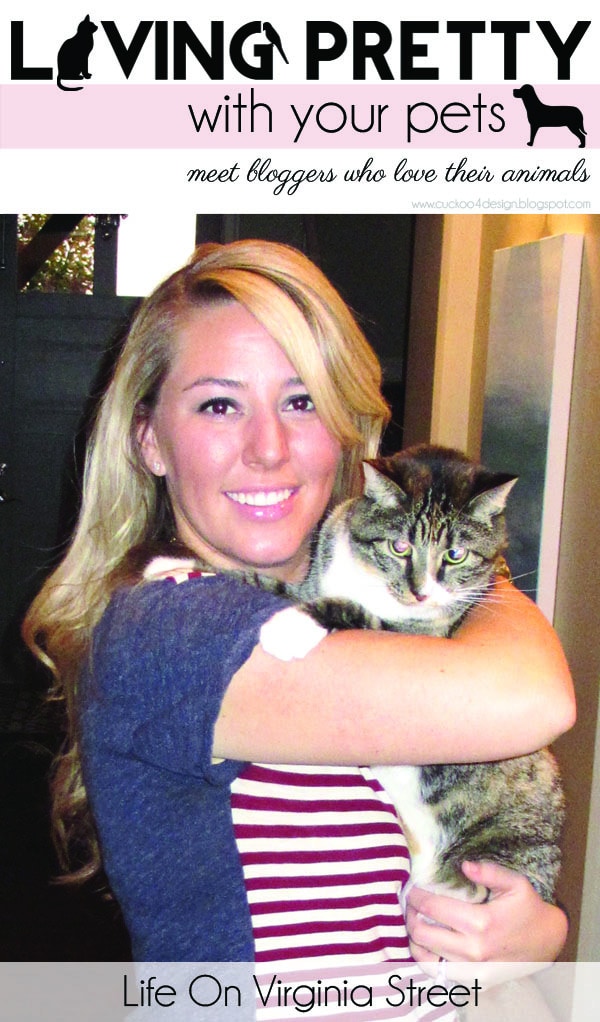 I’m Sarah from Life On Virginia Street and I’m so excited that Julia invited me over today! For those of you not familiar with my blog, I’m an insurance executive by day and DIY/Home Decor/Travel blogger pretty much the remainder of my life. My husband and I live in Omaha, Nebraska with our four cat furbabies – Bearcat, Bailey, Hawkeye and Henley. We are constantly working on updating our new-to-us home and we’ve come a long ways since we moved in back in 2012. The cats have followed along every step of the way and they sometimes believe they are ‘helping’ us with projects! 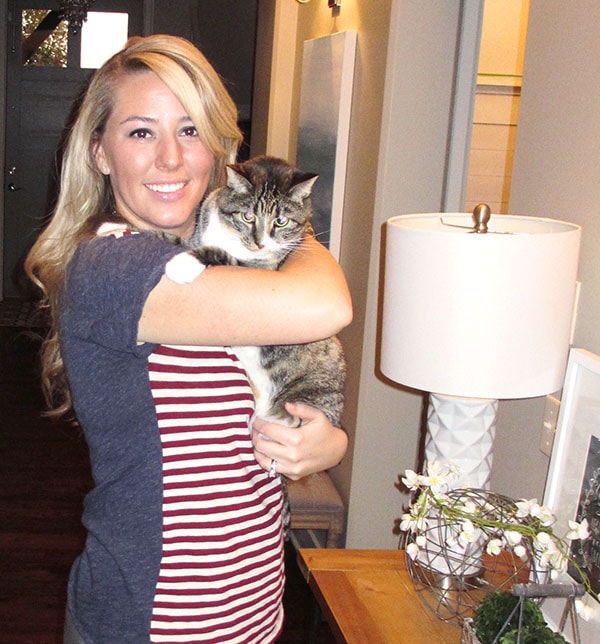 Why is there such a stigma about cats and cat owners being weird? Cats are the perfect pet for us and ours each have their own quirks and features that bring out so much of their personality and attitude! I really believe that animals take on the personality of their owners {obviously with their own spin}, so with that being said, ours are obviously awesome and extremely hilarious at times. In the past, I had always told my husband that I wanted the crazy/hilarious/wild kid in every litter….and it turns out I got four.

In my mind I was going to have a cute little family photo shoot and bribe all the cats to swarm me and smile so I had a fun photo to share, but who am I kidding. This is the chaos I deal with every single day. May I introduce Bailey, Bearcat, Hawkeye and Henley.

Since one of my cats was completely missing in the above photo shoot {with the exception of his ear and head in the bottom left corner of the pictures} and my husband was losing patience, we tried a new approach. Treats on the floor in the hallway.

While we did succeed in getting us all in the same frame at once, the blurs describe reality in our house. It literally feels like a circus most days.

Here is our little more about our {large} circus:

Bailey was the first and only cat we were going to adopt. She was part of a feral litter that my prior boss found in a flowerpot outside. Being ‘new parents’ we researched names before we received her and both thought the name Bailey was cute for a girl cat. The night we picked her up, her brother begged to come home as well. Hence, Bearcat’s arrival. My husband played football for Northwest Missouri State, so Bearcat was the only name he considered for a boy cat.

Fast-forward about two years later and I began begging for a new kitten. We ran into PetSmart one day “just to look” and the Humane Society was there with a bunch of kittens. And they were buy one get one free. Bad sign. We ultimately decided on the little black and white boy and as we were ready to take him away, his sister scaled the cage and howled the saddest cry I’ve maybe ever heard. And we were suckers again. Seriously, four cats were NEVER our intention, but it has worked out well. Hawkeye {the black and white boy} was named after Iowa football. Can you tell my husband likes football?! Henley {the little and extremely loud girl} was named after Don Henley.

Henley is my little perma-kitten and we consider her the baby of the family. She is also by far the loudest and bossiest of all the cats. She is a true kitten at heart but is also incredibly sweet although at times timid around new people. 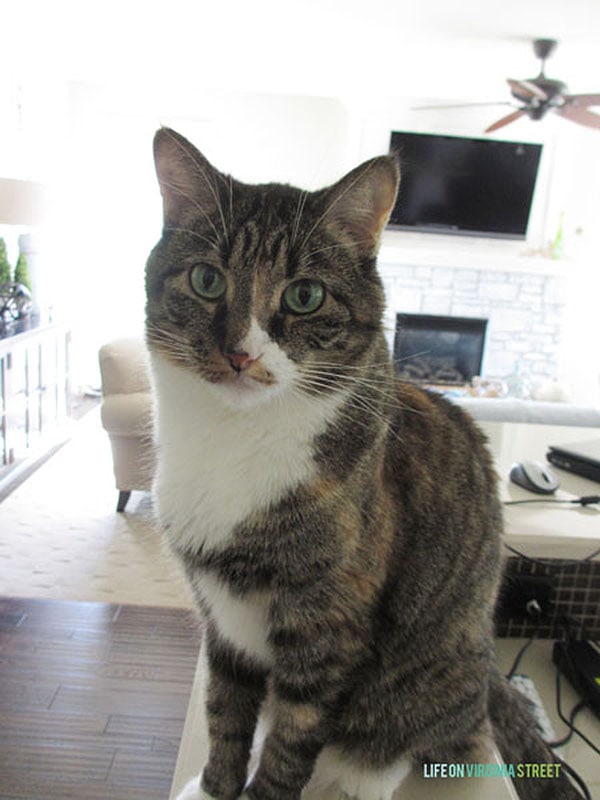 Hawkeye is the most independent. He loves the other cats {sometimes to his own detriment where they attack him} but he isn’t as crazy about humans. He has slowly warmed up to me and has become my lap cat when I’m on the computer at night, but he isn’t a big fan of being petted or ever being held. He’s also our resident genius and knows how to open doors among a few other tricks. 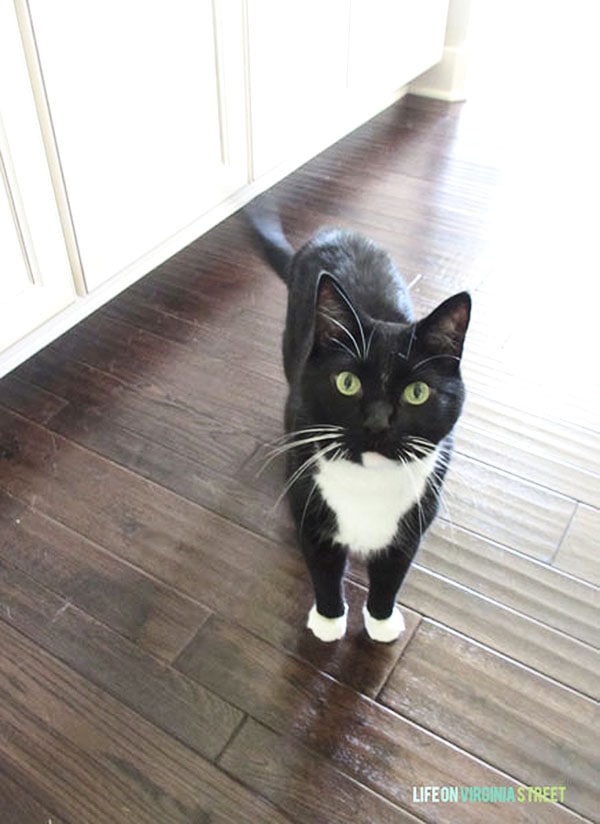 Bearcat is pure alpha male and makes sure everyone knows he’s in charge. If Bearcat isn’t happy, the whole house isn’t happy. The funniest part is that he craves attention {and is typically a terror when his dad isn’t around} and he loves human interaction. He is definitely the one that would prefer all the other cats be gone and he could live in peace as an only child. He also loves our next door neighbor’s maltipoo and they have tried to become friends but just aren’t sure how to interact with one another. Bottom line, Bearcat isn’t a cat person 😉 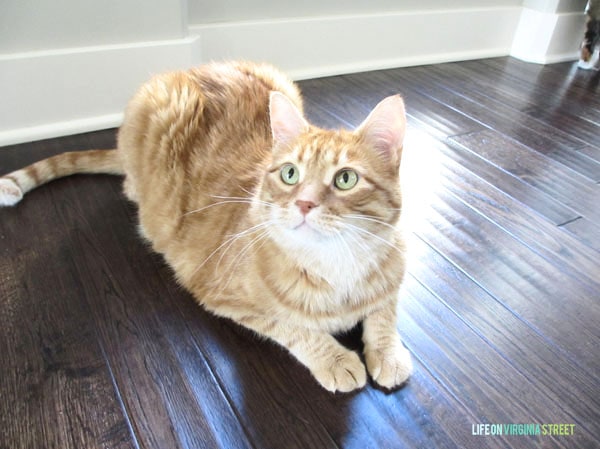 Bailey is our sweet, gentle cat. She used to be a lot like Hawkeye when she was young {not wanting much human affection} but that has changed as she has grown up. She is the only cat in our house that doesn’t eat human food, but has a borderline obsession with cat treats. So much so that she lays on the counter above her treat drawer for most of the day just waiting for someone to walk by so she can beg for a treat. 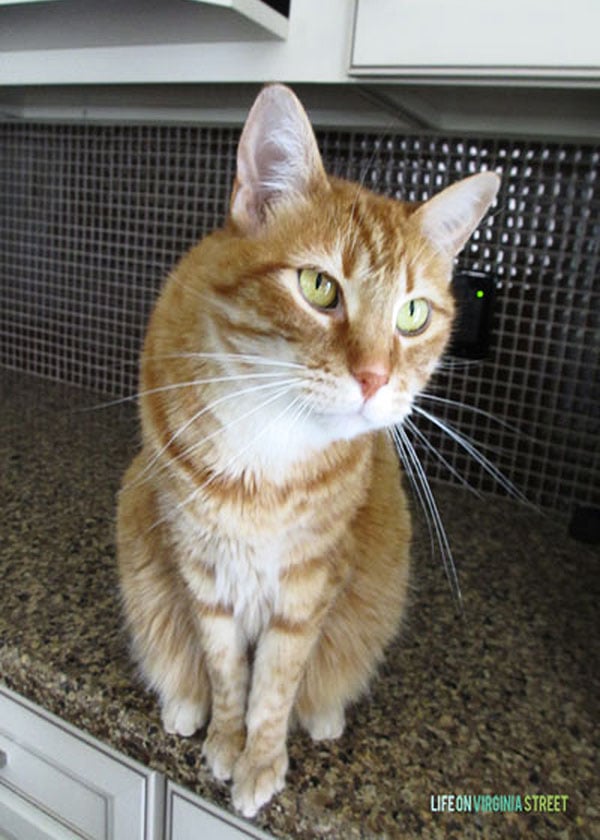 I’ve legitimately had people walk in our house and say they are so surprised how clean it is knowing that I have four cats. “Wow, it doesn’t smell like cats in here at all!” Not a compliment, but whatever. So, how do we keep up with the fur/smell/dark hardwoods/furniture/etc.? We don’t do it on our own, that’s for sure. I have a cleaning lady that comes over once a week. Having four cats is crazy enough, but as two insurance executives with full-time jobs and a blogging gig on the side? I can’t keep up with it and don’t try. Thankfully, my cleaning lady handles it all and we do minor clean-ups throughout the week. But by the end of each week, we still have the occasional fur tumbleweed floating around or on our furniture and we live with it. It does help that our basement is unfinished so we can store all the litter boxes down there as well as their feeding station. 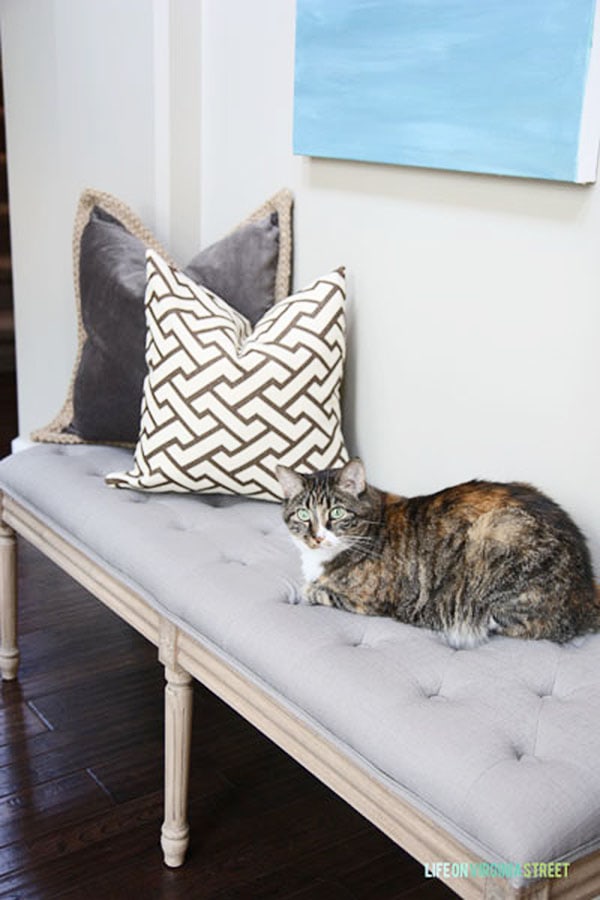 I’ve also received a lot of questions about what we do with the herd when we travel {which can be quite frequently at times}. Fortunately, my sister-in-law and brother-in-law that live in town have their own cats and they are more than willing to step in and check in on them when we’re gone for more than a day at a time. Another great feature of cats, though, is that they are so much more independent and can take care of themselves for a day or two at a time if we need to leave them for a short trip.

For all the craziness these four bring to our lives, we really couldn’t imagine it any other way! It is amazing how, coming home after a bad day at work, your pets can cheer you up and change your entire demeanor!

Thank you Julia for inviting me over! This is such a fun series and I’m always a huge fan of reading about other animal lovers!

To read more animal posts you can click HERE.

I can so relate to Sarah! Isn’t her bunch fun? I always look for the crazy/hilarious/wild kid too. That’s how I like my dogs as well as a kid and so did my parents.My favorite part is feeding them all in the morning when they actually do come running and it’s the only time they do, any other time they could care less.
I adore all the different personalities and how Sarah described them. Sounds like they are very loved.
Don’t forget to visit her blog and house tour by clicking HERE. Just look at her office and bedroom!!! You must visit 😉 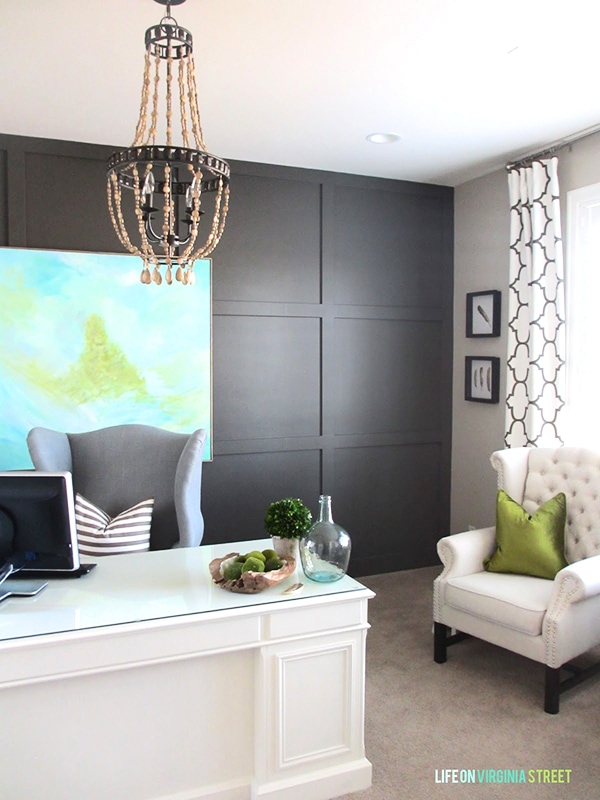 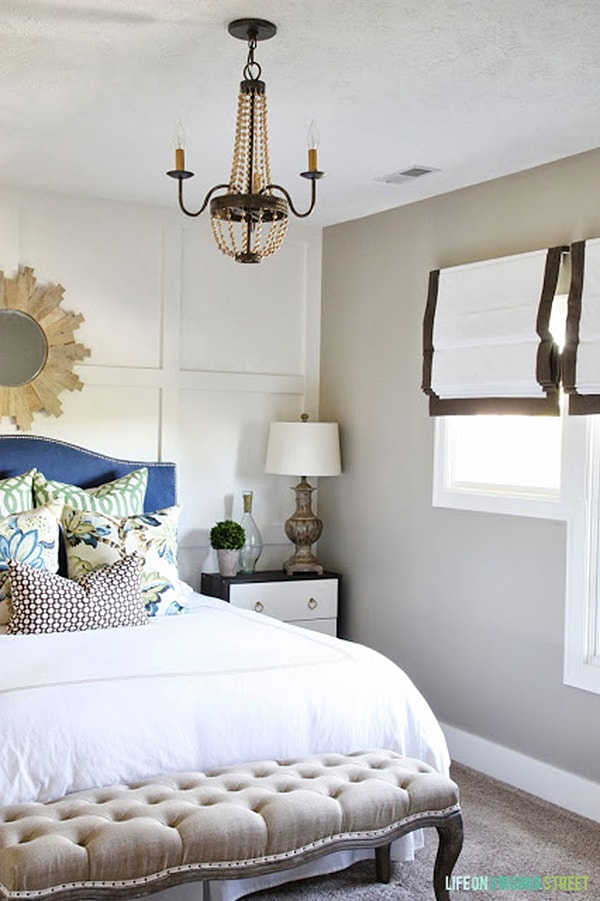 Have a great weekend and let me know if you noticed any problems on my new site. I’d really appreciate it.