Pet Friday it is my friends and I have the talented Jen Woodhouse in the house. I attended her woodworking class at Haven. I didn’t have a chance to talk to her but I was sure staring at her, LOL. She is one of those very very blessed women. In every way! I had no idea that she could sing like an angel until last night when I put the post together (click HERE and HERE). All I saw in Atlanta was a beautiful woman with the most amazing hair, building something awesome out of wood. Man what I would give for her thick hair…ok lets stop dwelling on the hair, we are here to meet her handsome furry family member. 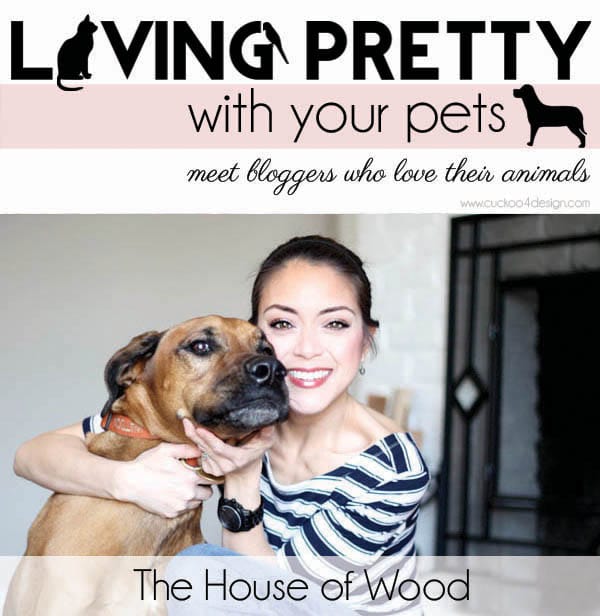 Hi friends! I’m Jen Woodhouse and I run The House of Wood, a blog about my DIY life as a military wife. I’m thrilled Julia asked me to guest post over here today! I’m sharing Watson’s story – he’s the little guy in the middle. Although these days, he’s not so little. This photo was taken when he was just a couple months old, with his (biological) mom and dad: 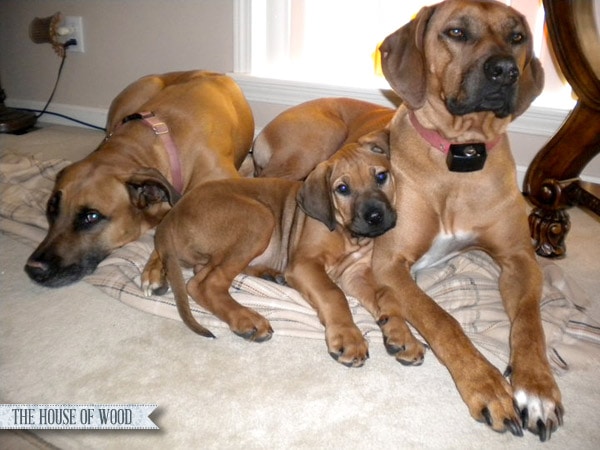 Isn’t he a handsome fella? And such a sweetheart too. He’s our gentle giant. He’s a Rhodesian Ridgeback and tomorrow is his fifth birthday! Every year, we do something special for him, like bake him some homemade ‘pupcakes’ or dog biscuits. This is our favorite recipe: peanut butter banana cupcakes (click HERE). 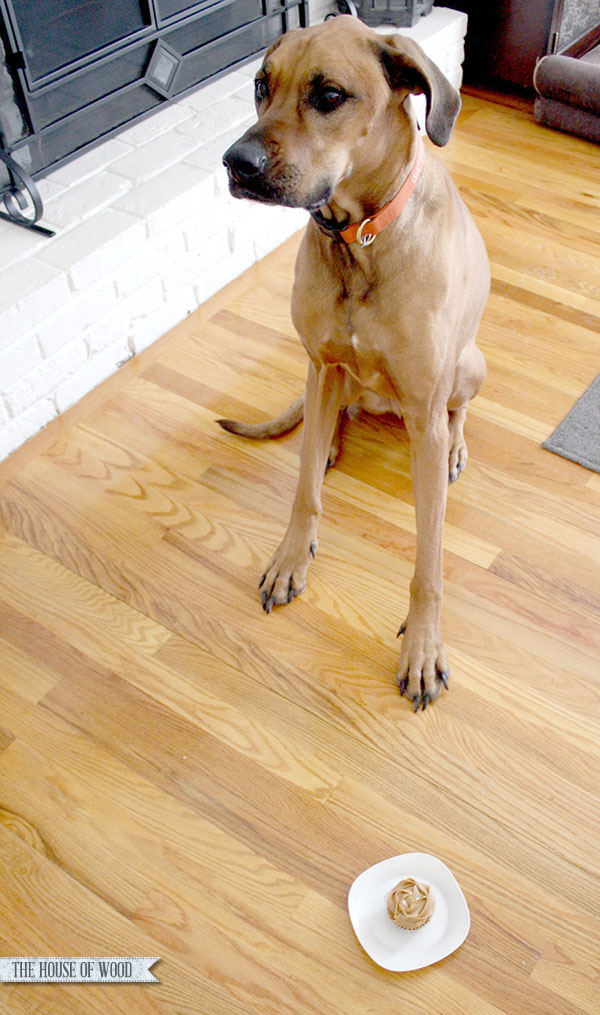 The Rhodesian Ridgeback, or African Lion Hound, is such an awesome breed – they were originally bred to hunt lions in South Africa. Lions. They don’t mess around – they’re fearless and intelligent, armed with the ability to outsmart and frustrate a lion (as well as other large game) and keep the beast at bay long enough for their master to come in for the kill. Pretty hardcore, right? 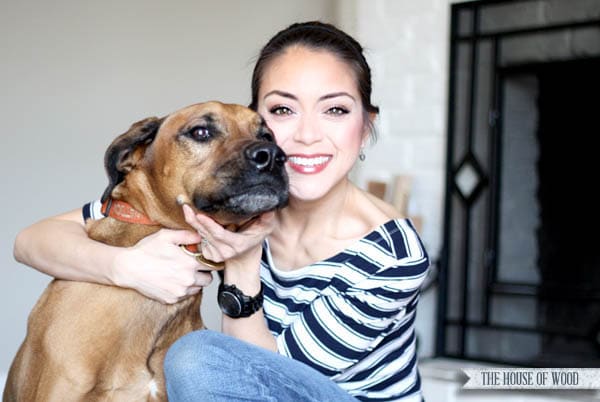 Ridgebacks are often said to be aloof to strangers, but that doesn’t apply to Watson. He loves everything and everyone. It’s pretty hilarious to see him coming at you; he almost folds in half as he wags his tail so hard. Speaking of tails, that’s the most dangerous part of him. When it hits you, it feels like a whip. My thighs are covered in bruises because this dog is just so happy all the time. My poor kiddos get it in the face – at ages 4 and 2, they stand exactly at tail-whipping height. Watson weighs about 100 pounds, which is bigger than the breed standard of 75-85 lbs, but he still thinks he’s a lap dog. What is it about giant dogs who don’t realize their size?

A few years ago, it was Halloween night and we were out walking Watson when we heard a little kid say, “Mommy, that man is walking a deer!” The next Halloween, we put antlers on him and Watson went trick-or-treating with the kids dressed as a deer. 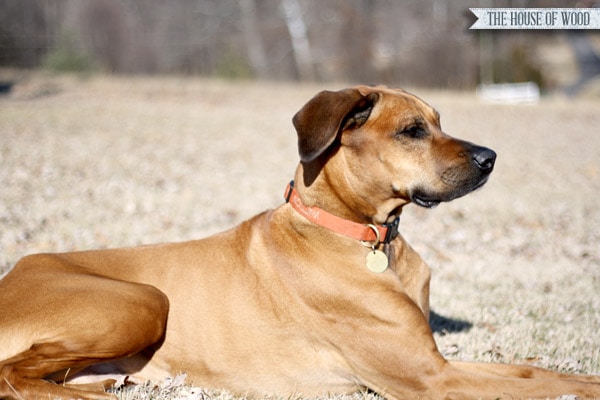 A distinguishing breed trait is the ridge of hair that grows in the opposite direction on their backs – it looks like a mohawk. People often mistake it as a sign of aggression or anger, thinking he’s raising his hackles. He’s not, he’s just being a hipster, with his permanent mohawk. So stylish. 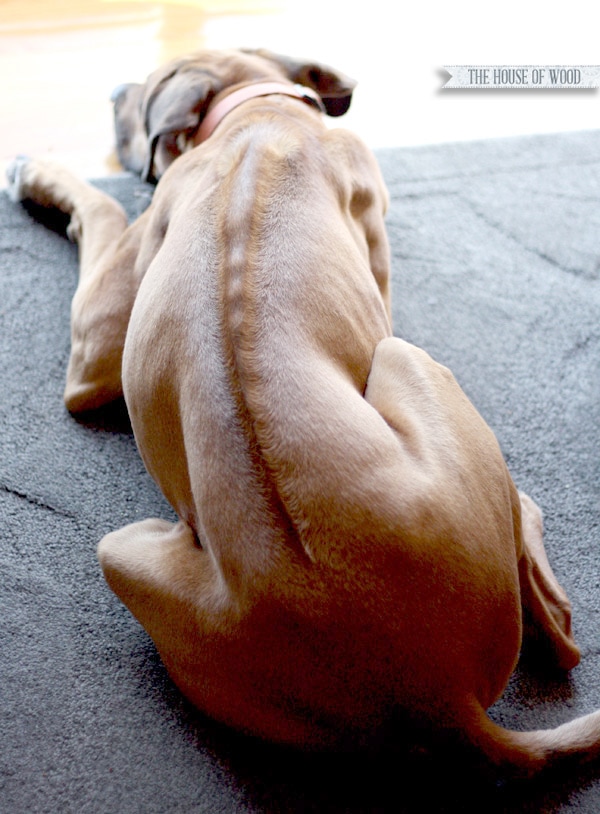 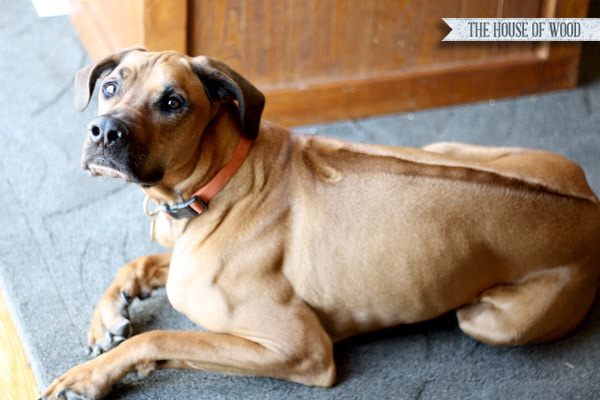 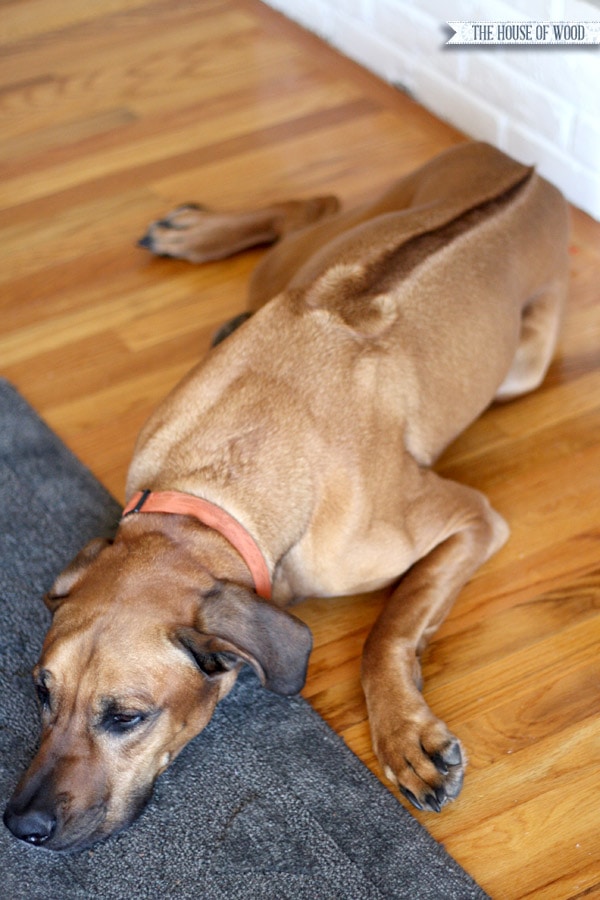 We got Watson when I was 4 months pregnant with our first (human) baby. People thought we were crazy to get a puppy while we were expecting our first child, but it worked out so well. He is so wonderful with the kids; they like to ride him like a pony and he’s so patient and loving with them. I love that they’ll all grow up together.

Ridgebacks are pretty laid back – they’re more inclined to remove themselves from a situation if they’re annoyed, instead of posing a challenge or threat. Watson doesn’t bark much, but when he does, it’s a sound to be reckoned with! His bark sounds more like a roar. Ridgebacks are said to make excellent watchdogs – they’re faithful and loyal, completely dedicated to their families, which will be useful once my husband gets deployed again and I’m left home alone with the kids. Once a Ridgeback chooses ‘his person,’ it’s a lifelong connection and he’ll be fiercely protective of ‘his people.’

They’re also very athletic. Watson loves his morning run – he’ll run 7 miles with my husband without breaking a sweat – but the hound in him is content to just lay around and lounge all day too. It’s the best of both worlds. Can you tell I just love this breed and our sweet boy Watson? He’s the best. 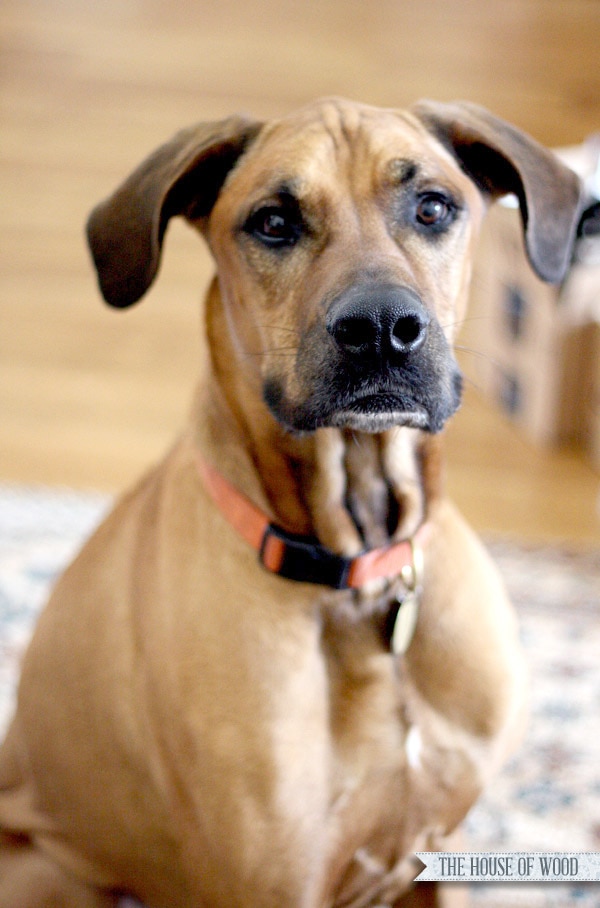 He’s massive and we love having such a large dog. His head is right at my waist and if I straddle him, I’m up on my tippy toes because he’s so tall. He certainly leaves an impression. It’s actually pretty funny – random strangers will just stop and take pictures of him wherever we go! But then again – and I could be biased – he is a handsome devil, don’t you think? 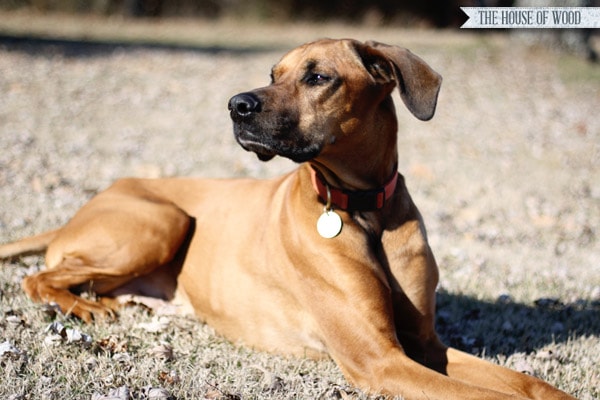 These photos are pretty misleading. He looks very distinguished and reserved, but he’s actually a big goofball. He’s so clumsy with his gangly legs and always so happy, smiling his goofy, lovable smile. 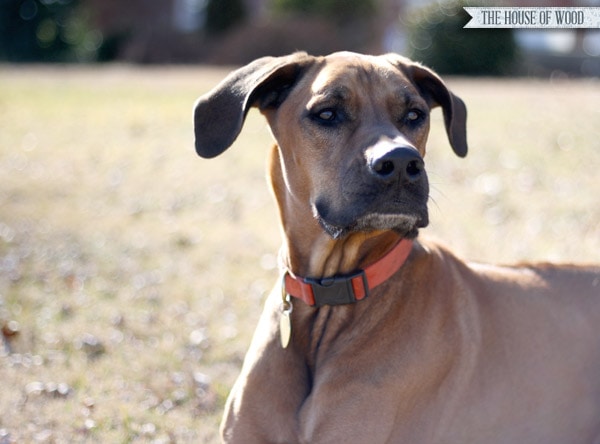 Here he is with all of his cousins. We’re a dog family, can you tell? Willow is the old lady in the back – she was rescued from a shelter and is old as dirt. Oliver is the black basenji mix and the yellow lab is Geoffrey. They’re both rescues and they belong to my sister and her husband. Duncan is the new guy – he’s a white German shepherd pup and he belongs to my parents, along with old lady Willow. These guys are all BFFs – except Willow – she’s too old to give these guys the time of day. But then again, she’s not really a dog-person, she’s more of a people-person. They’re a handsome bunch, right? 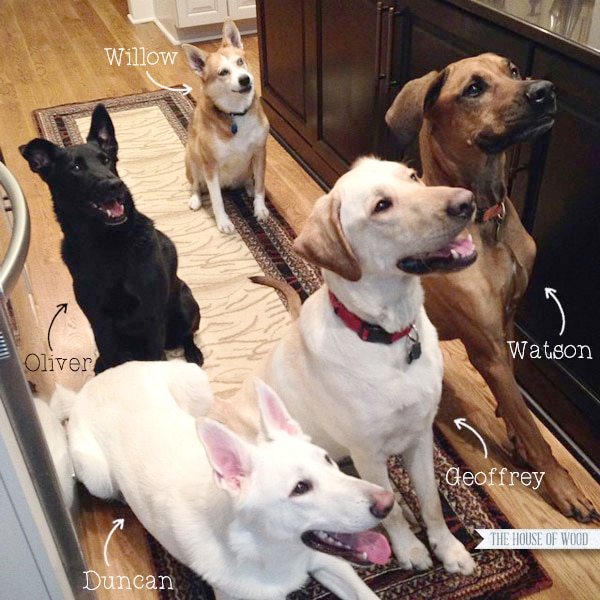 Thanks for letting me gush about my big boy Watson. And thank you to Julia for letting me invade her space for a day! If you want to keep in touch, Instagram is my jam. I’m @jenwoodhouse and I usually hashtag #Watsonrocks whenever I post photos and videos of my favorite gentle giant. You’ve got to see some of the crazy shenanigans he and my kids get into. Life is so much sweeter (and funnier) around here because of him. Seriously, it’s cuteness overload when the three of them get together. Consider yourselves warned.

The cousins are awesome aren’t they? Love that crew!
And what dog wouldn’t want pupcakes for his birthday?!?!
And I want to see the deer antlers on Watson for Halloween.

Can you believe she built this nightstand from scratch (click HERE): 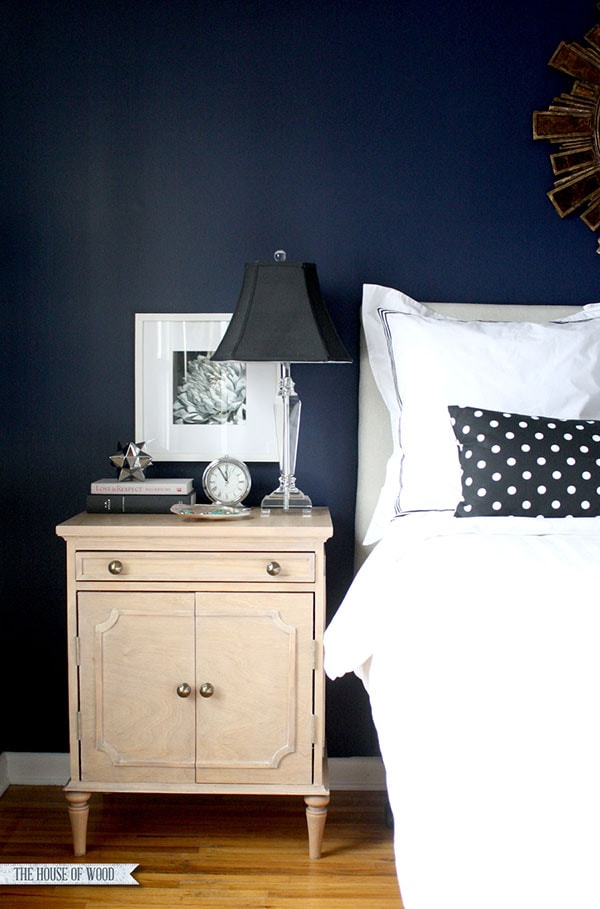 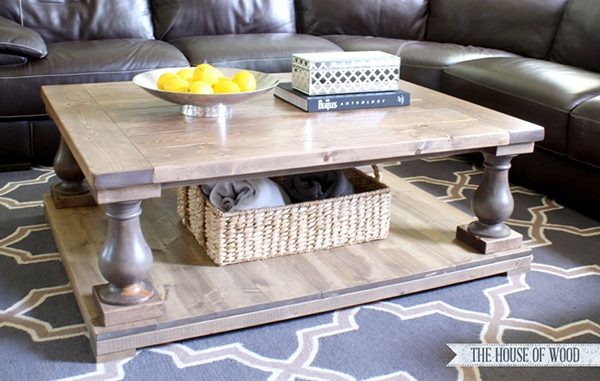 There she is and I’m full circle again to the hair, it’s amazing.
I might totally be dwelling on hair in this post because mine is falling out and I’m mourning the loss of my thick youthful head of hair.
Don’t judge! 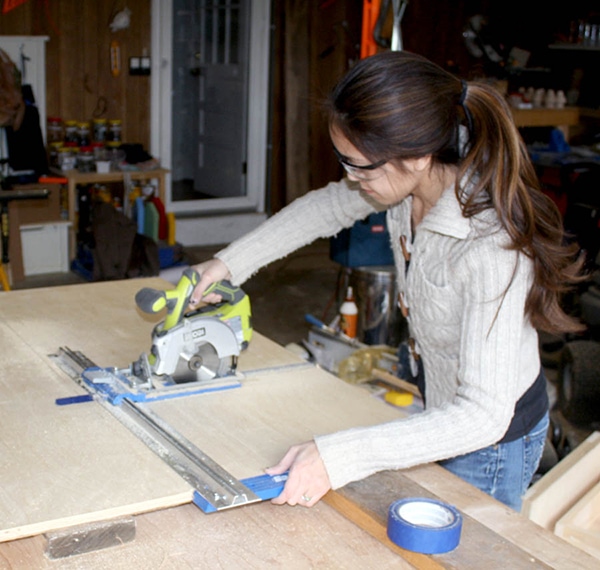 So now head on over and pay Watson and Jen a visit by clicking HERE. Remember to wish him a Happy Birthday and also don’t forget to “not compare yourself” 😉

Happy Weekend y’all. It’s my birthday too today but I’d rather not even mention it. I had something bigger planned for you guys but it had to be postponed. So I will have a super giveaway for you one day very soon ok? I’d rather talk about Watson’s birthday instead 😉